Fairview Avenue is one of Goleta’s main thoroughfares today. But who knew it’s also one of the oldest routes in Goleta? 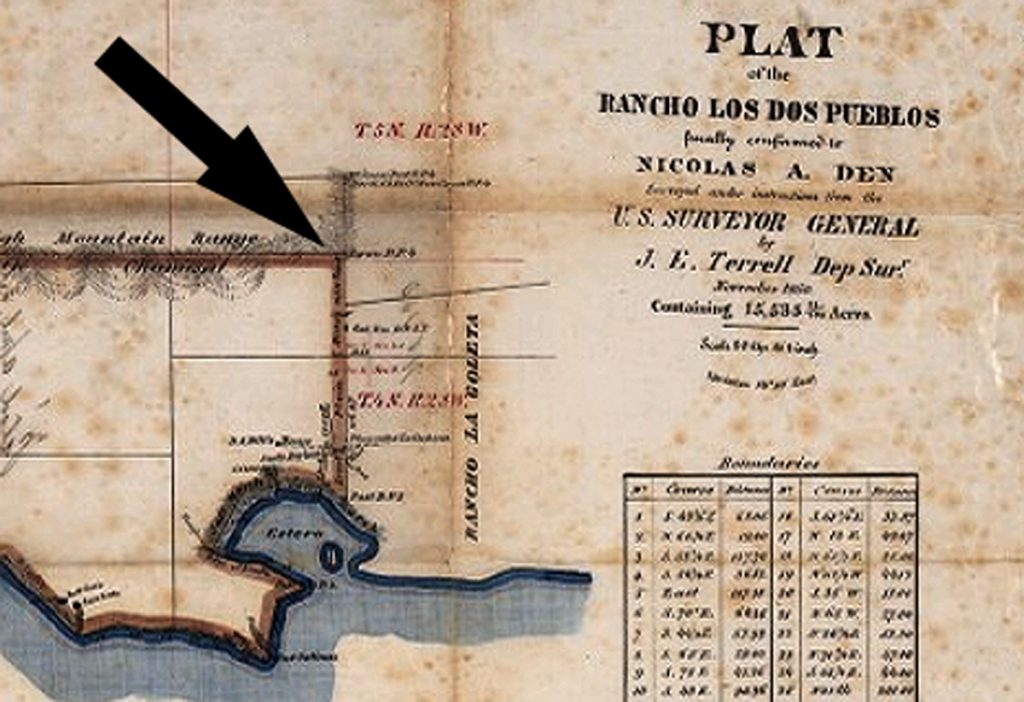 It was first laid out way back in 1842, as the eastern boundary of Nicolas Den’s Dos Pueblos land grant. Although it wasn’t actually a road quite yet, this was how it first came to be. 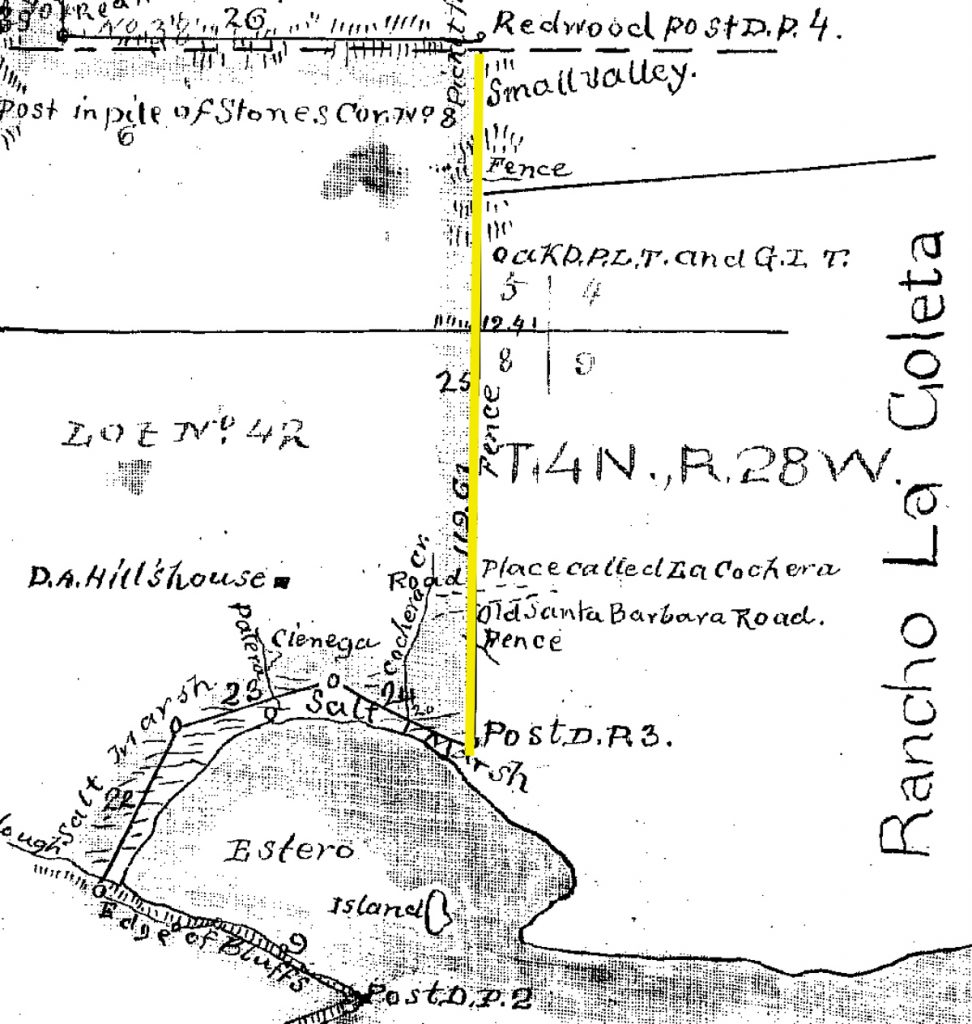 It probably started to be used as a road around 1846, when Daniel Hill chose the same line to be the western border of his Rancho La Goleta. 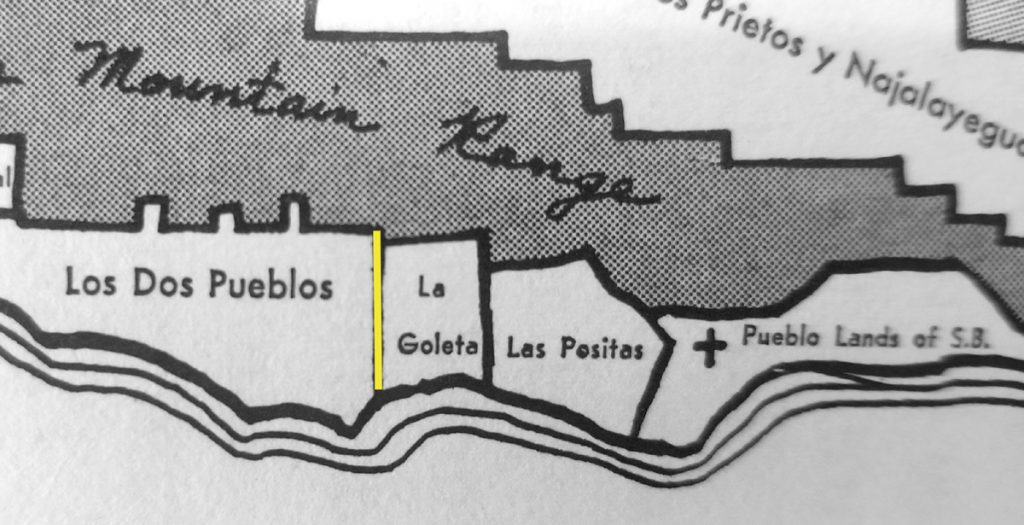 While technically just a border between two ranches, it was surely walked and ridden on regularly making it, by necessity,  a road. The actual ranch border changed in 1851, when Hill bought the 1,000 acres just to the west from Nicolas Den, but the route had been established by then. So, how did this little ranch road get the name Fairview? 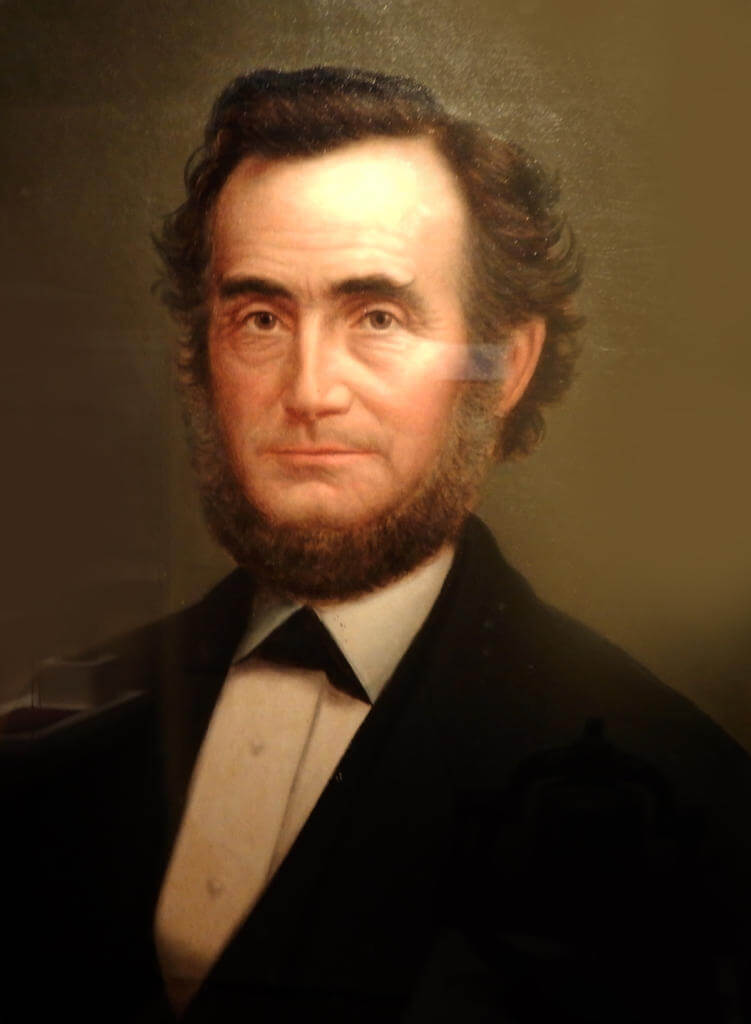 Well, like so much of our history, it all goes back to this gentleman, W.W. Hollister. It seems Col. Hollister had an older brother named Albert back in Missouri. Albert Hollister had undergone some tough times during the civil war and now his health was suffering. So in 1870, Albert decided to visit his successful younger brother and see why he was always raving about this “good land” called Goleta. Once he saw it, he too was taken by its beauty and decided he wanted to stay. 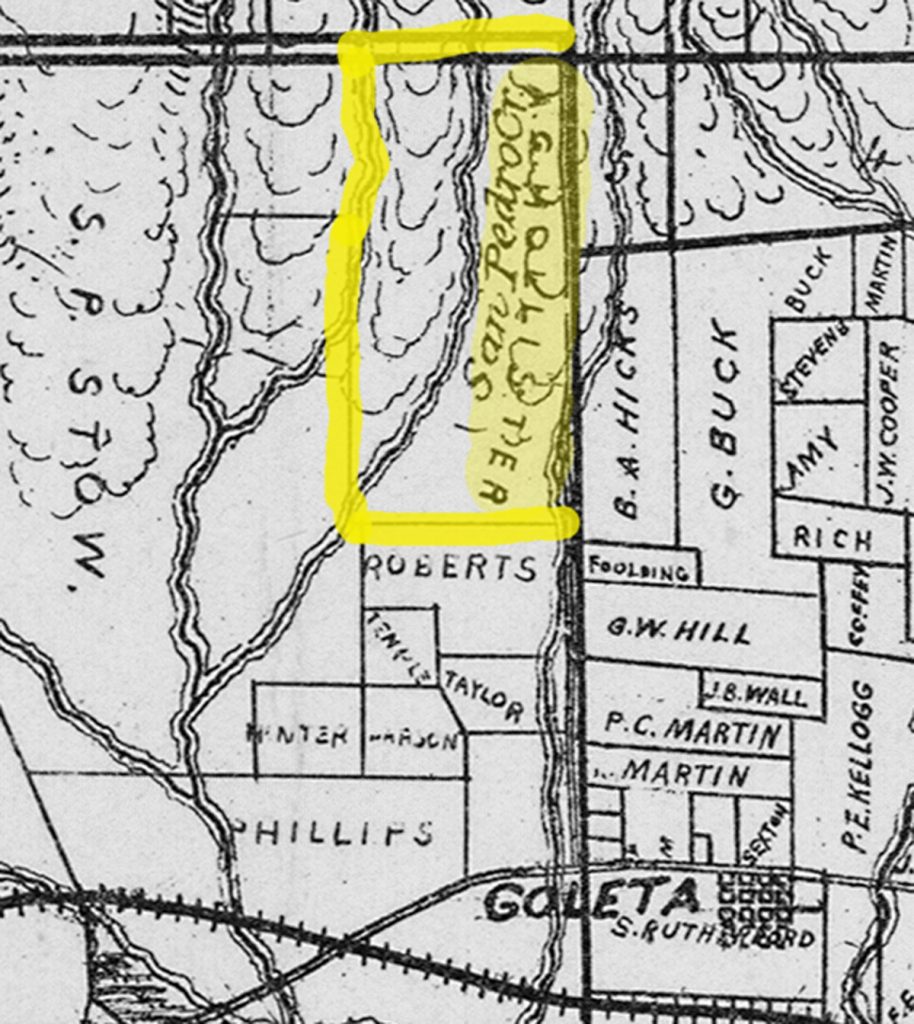 Albert Hollister made several offers to Rafaela Hill to buy a portion of the land she had inherited, but she refused. But in 1874, a few years after her marriage to German Senter, she agreed to the sale of a parcel just north of Stow Canyon Road and west of the former ranch borderline. Albert Hollister purchased 480 acres of prime Goleta land for $125 an acre. 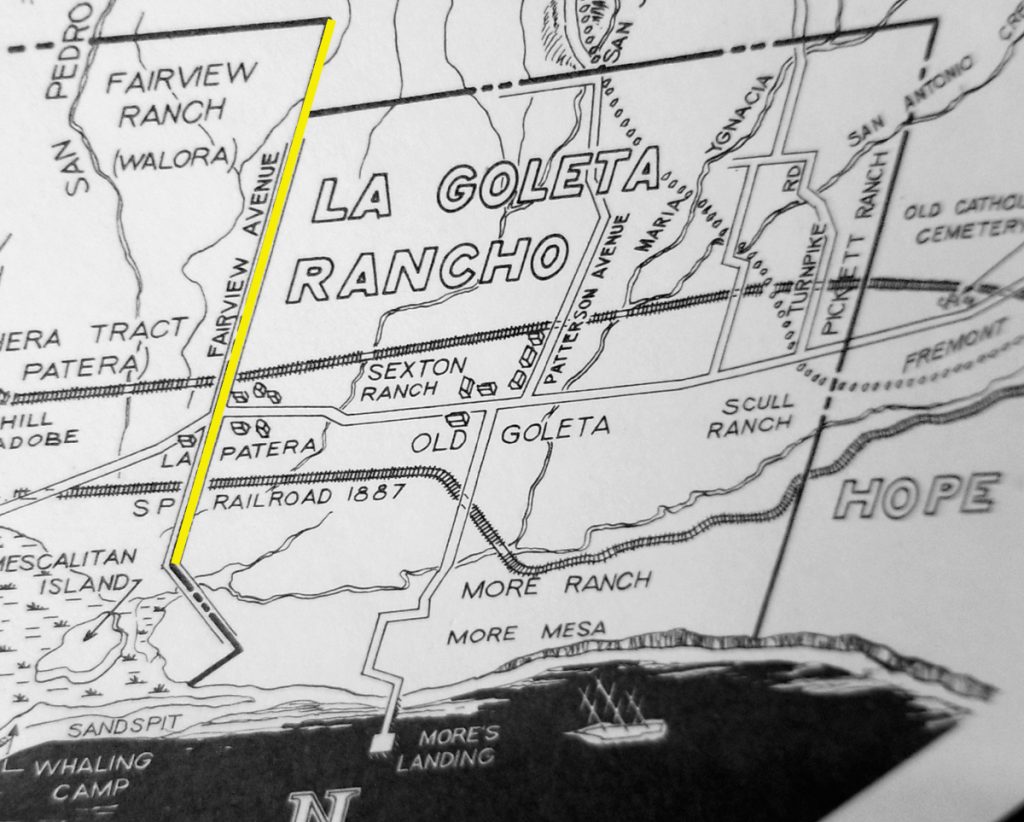 Albert Hollister built a two story house on a knoll at the base of the foothills and his family came out from Missouri. According to local folklore, when his wife gazed out her new kitchen window at the beautiful rolling farmland, backed by the blue Pacific Ocean and the Channel Islands on the horizon, she said, “What a fair view!”. 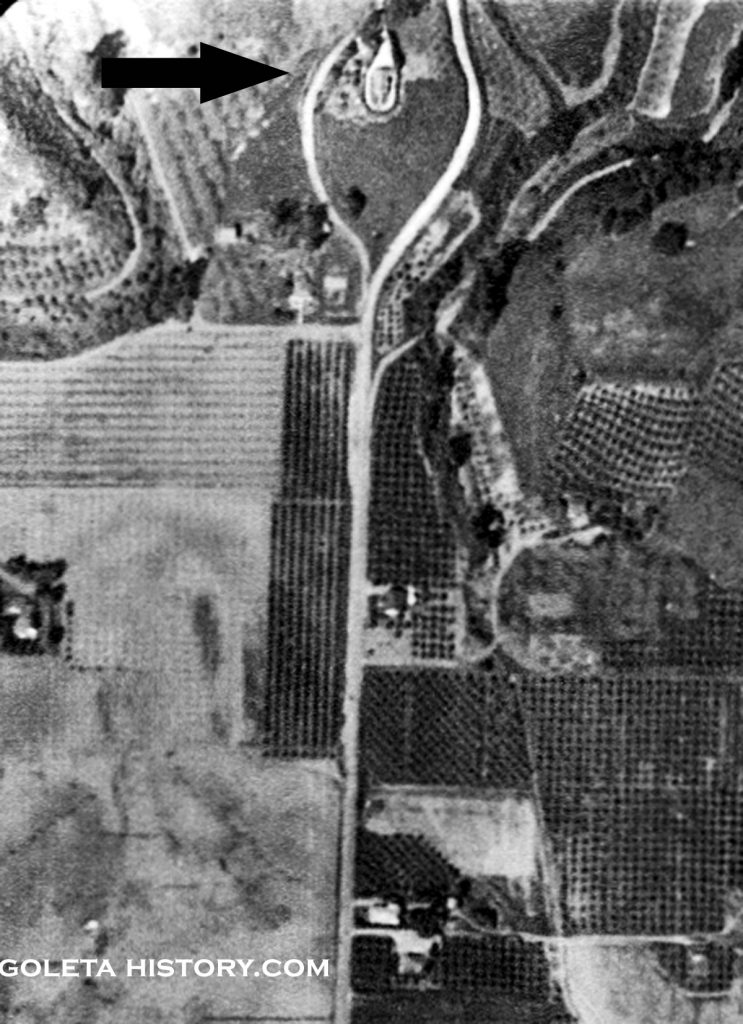 And so it was in 1874, that Albert Hollister named his new home Fairview Ranch. And so the narrow dirt road bordered by olive trees was dubbed Fairview Road. 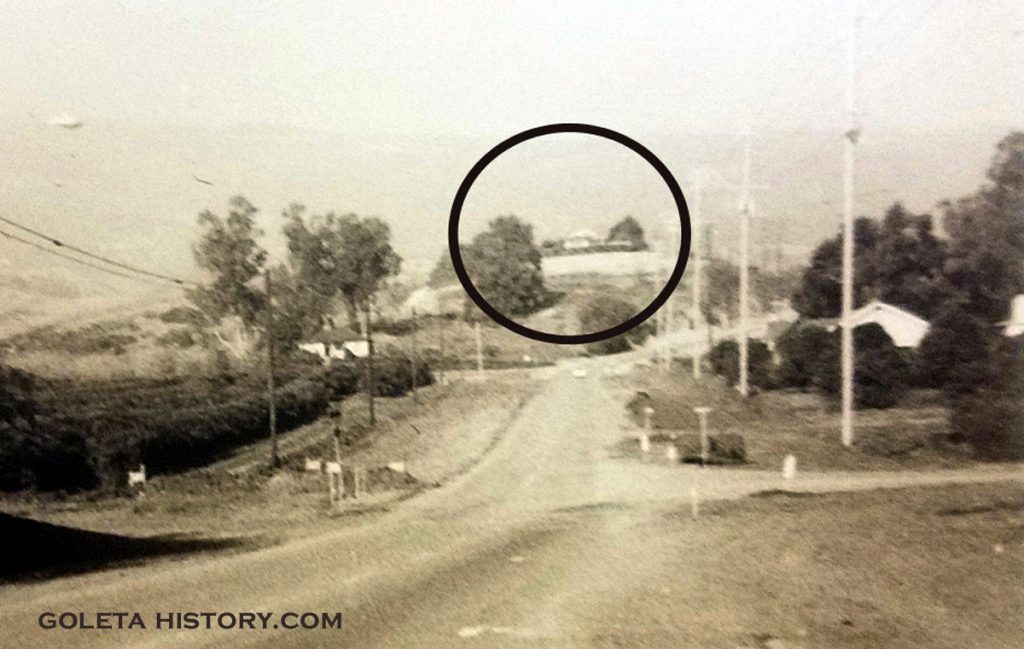 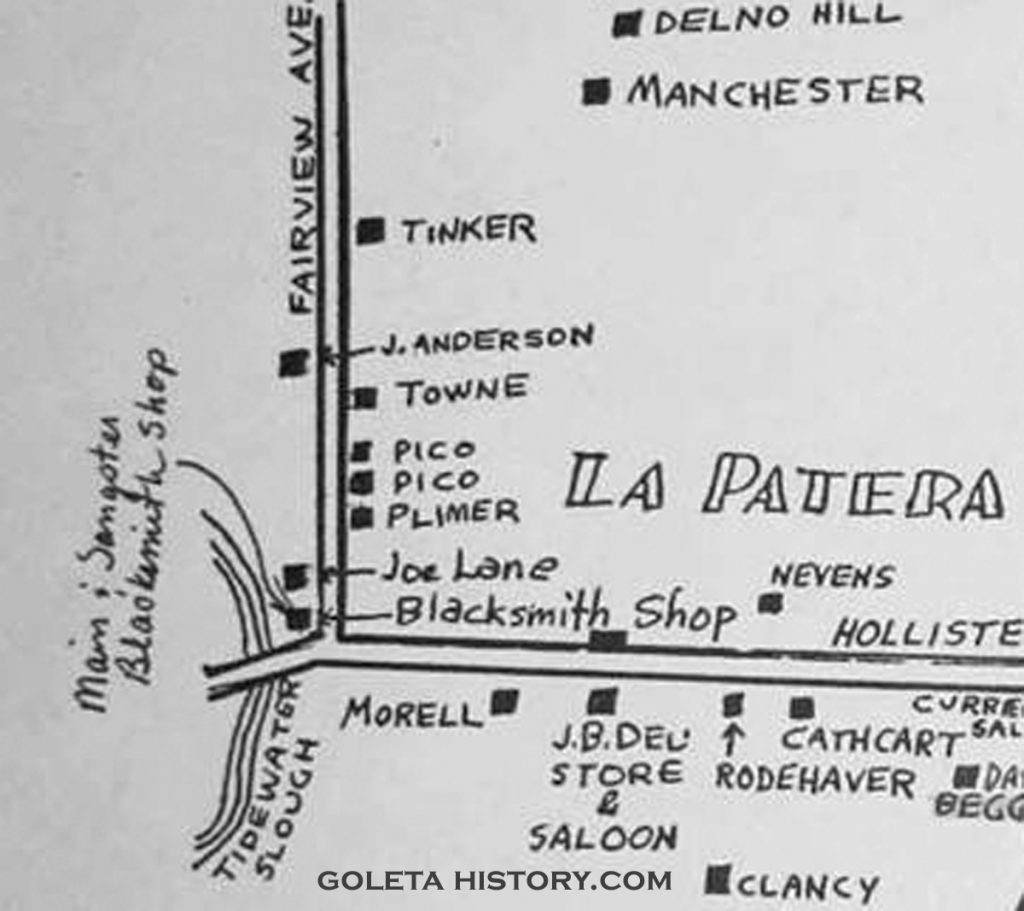 Well worn and established from years of use, it went from the La Patera blacksmith shop at the edge of the slough up to the north end of the Fairview Ranch. Two years later, in 1891, Albert Hollister passed away and his son Edgar took over the operations. 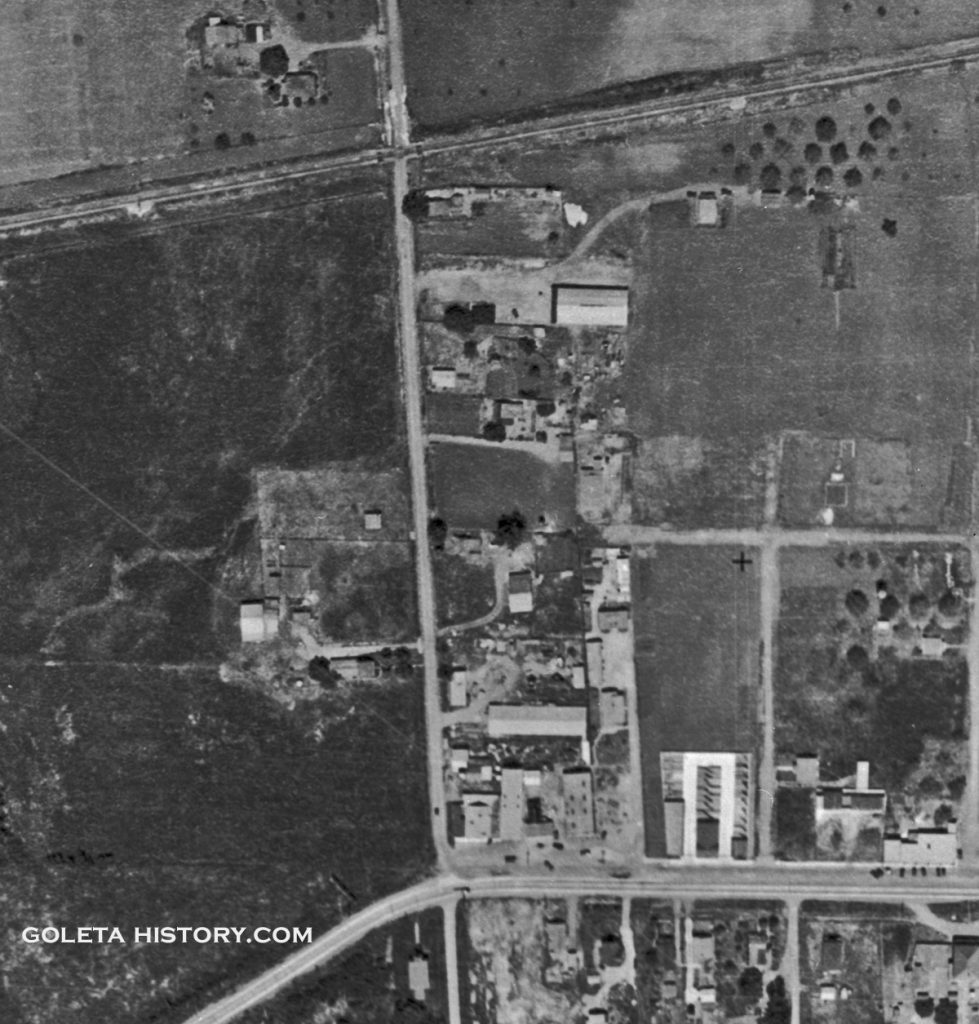 Meanwhile, the little town of Goleta kept growing as the once mighty La Goleta Rancho was sold off and subdivided, bit by bit. 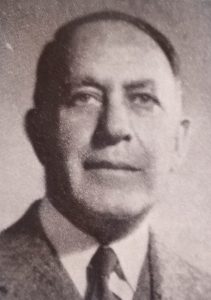 In 1919, a wealthy physician named Dr. Walter Franklin, from San Francisco, bought a large portion of Edgar Hollister’s Fairview Ranch. He and his socialite wife Laura named their portion of the ranch, “Walora”, a mix of their first names. 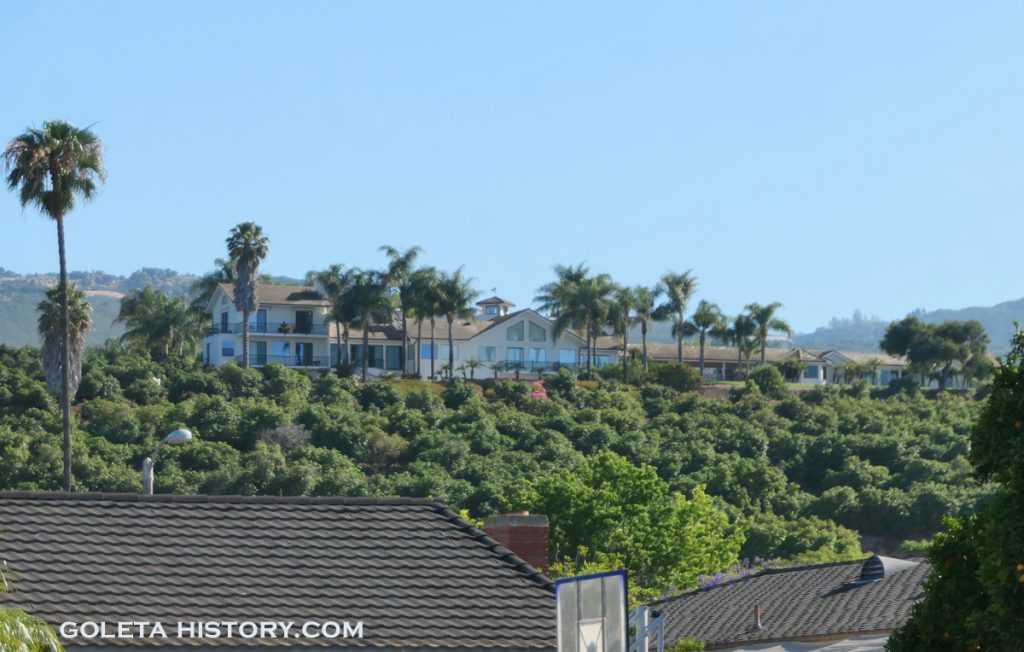 They were extravagant and stylish people and they built a sprawling white mansion on the ridge overlooking the Goleta Valley, the renovated version still visible today. Walora was an architectural showpiece, visible from all around town, and it boasted beautiful formal gardens accented with multiple fountains and statues, a tennis court and a fabulous swimming pool. The Franklins hosted illustrious parties with lots of celebrities and dignitaries riding in their shiny stretch limos, right up humble old Fairview Avenue to Walora. 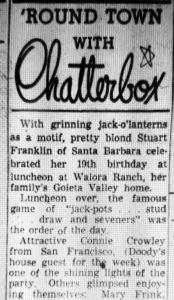 The Franklins were such celebs, the L.A. Times gossip columns reported on all their comings and goings. 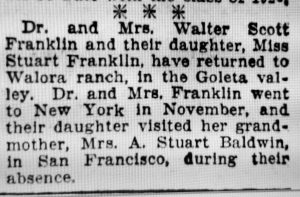 With frequent mentions of their Walora Ranch in the Goleta Valley. 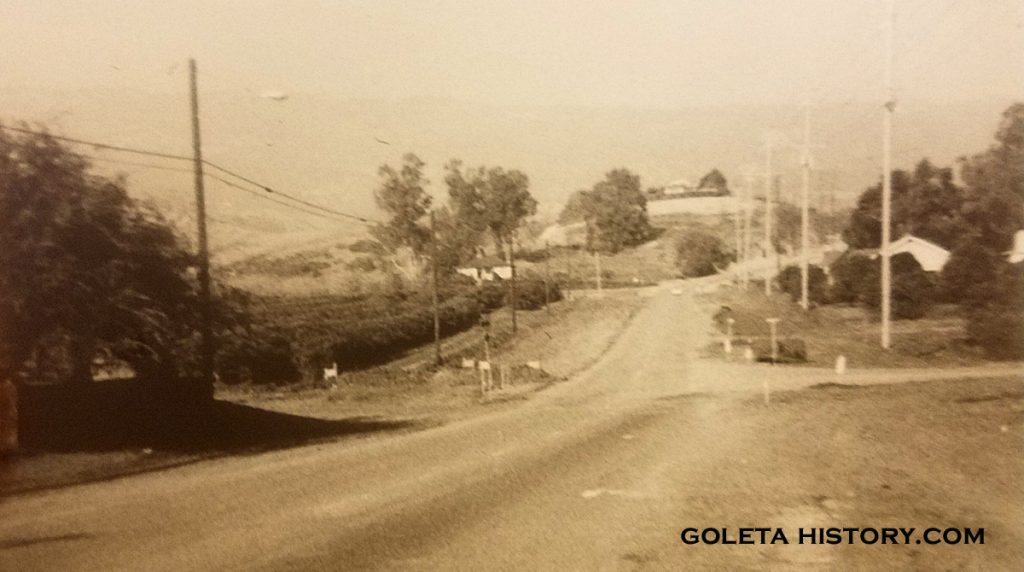 Dr. Franklin was obsessed with his new Goleta ranch. One of the first things he did was install power poles to bring telephone and electricity all the way up Fairview Avenue to Walora. He generously invited everyone along the way to tie into his service. Franklin removed the walnuts the Hollister’s had planted, and was one of the first in the area to plant acres of lemons. He was also experimenting with avocado cultures and had a large vineyard, a commercial berry farm and he dabbled in turkey breeding. Walter lived happily there until his death in 1946, and Laura stayed until 1961. 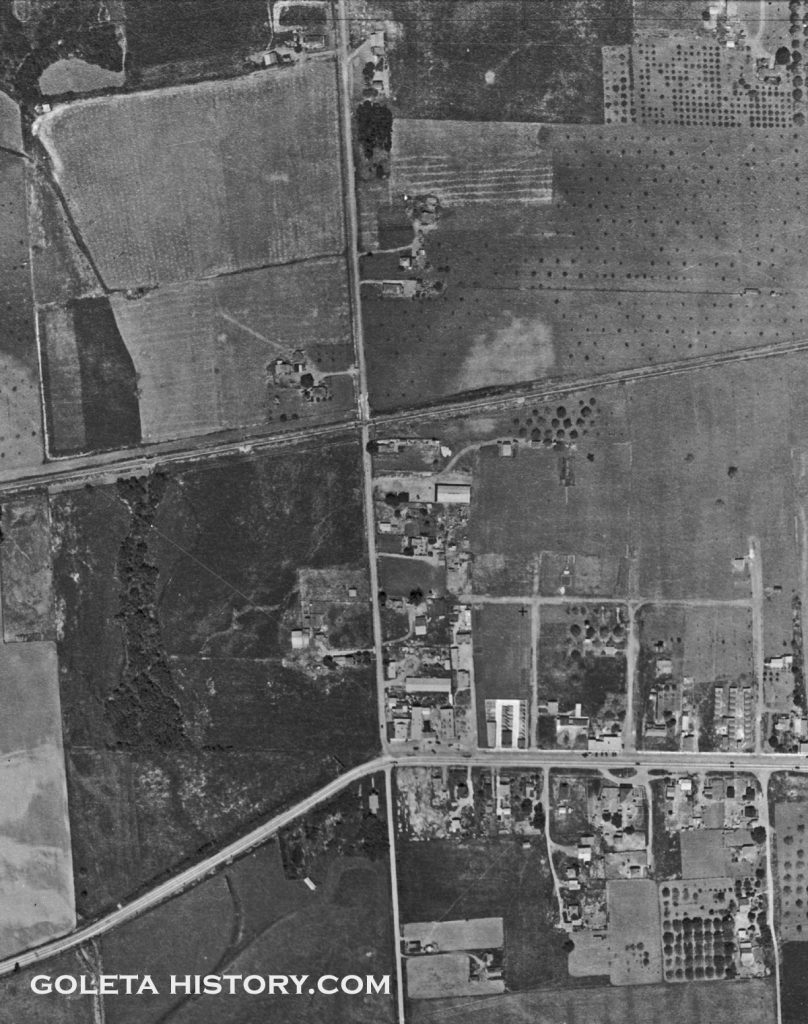 In the late 1920’s a large, smelly slaughterhouse called “Corral No. 5” graced the west side of south Fairview, the site of today’s airport.

The slaughterhouse was there until the Marines built their base in the early 1940’s. The Marines had tolerated the stench until it “mysteriously” burned down. Also visible in this shot are the famous 2 Hangars and the sprawling little berg of downtown Goleta.

The east side of Fairview continued to be developed, but the west side remained mostly farmland, due to frequent flooding. This was still technically part of the slough, an area formally known as La Patera, a tribute to the large duck population in the swamp.

The second world war changed everything, and it brought some major changes to Goleta as well. The Marines took over the simple little airfield and made it into a legit airport. Additionally, they built lots of new buildings all around the slough.

Along Fairview Avenue, they built this cluster of barracks they called Homoja Housing. Learn more about Homoja housing here. Today this is where the Twin Lakes golf course is located. Also notice in the upper left the Seaside gas station.

This housing was for soldiers that had families. Two families lived in each hut. Check out the classic old cars parked around them.

This photo from 1948 shows them still there, at this point used as affordable housing.

Here they can be seen in 1953. The Homoja housing would be there until the Fairview overpass was built in 1960.

A better view up Fairview Avenue from Hollister in 1953. Notice the housing on the left and the water tower in the right. Water towers were about to become obsolete thanks to the construction of Lake Cachuma. In fact, Lake Cachuma brought a whole bunch of changes to little Goleta.

In the late 1940’s, U.S. Route 101 blazed through Goleta, and Hollister Avenue was no longer the highway.

For a while, the traffic wasn’t too heavy, but by the end of the 1950’s it got to the point where overpasses had to be built. Circled is the intersection of Fairview and Highway 101.

This view shows how Fairview just went straight across the new highway and the train tracks. Also shown above are the Homoja huts and the new Airport Drive In theater.

So the question is, why did they design the Fairview overpass with this big loop in it? All the other overpasses in town go straight over. This must have been much more expensive to build, so there must be a good reason. Some say to preserve the businesses that already existed on south Fairview….

This article mentions the Ambrose Lumber Company on the south side of the freeway. Why were they spared, but the article mentions all the other property owners that had their land “taken”? Also they mention the 13 families that live in the Homoja huts that got the boot so they could pull Fairview 500 feet to the west and make a big loop. All to spare Ambrose lumber? Mr. Ambrose must have known some important people….

So in order to re-route Fairview Avenue for the overpass, 13 families were evicted and a lot more money was spent on planning and construction. There’s got to be a good reason. Jeff McAllister says some Goleta old timers remember there being a Chumash burial site there that caused the redirection, but given what they did to Mescaltitlan Island, we have to doubt this is the definitive answer…

This blurry image shows the overpass under construction. The arrow shows the new route passing right through the middle of the Homoja huts in order to make the wide loop around.

This is a better view of the newly finished road going right through the middle of the Homoja huts. 13 families were displaced from what was affordable housing at the time.

A marvel of modern engineering with only orchards and a couple gas stations on the other side. Was it intentionally shaped like a backwards question mark to tease future historians as to why the big unnecessary loop?

The brand new Fairview overpass got plenty of use right away, even before they built sidewalks.

Once completed, the gate was wide open for Goleta to grow on the north side of the freeway. And grow it did. In the upper left you can see the beginnings of the Fairview shopping center and the Calle Real corridor.

A developer named John Lucian was right on time with his new Fairview Shopping Center. This article from the December 1963 Goleta newspaper, the “Gazette Citizen”, detailed what businesses would be in the new shopping center. it also mentions the driver of the bulldozer in the photo and gives his home address!

The completion of the Fairview Shopping Center in 1964 was a huge event for Goleta commerce and the first step in making the North Fairview corridor the main commercial district in town. A huge event was held for their grand opening, including a helicopter dropping numbered ping pong balls good for cash and prizes.

This shot looking towards the ocean captures the Fairview Theater under construction in the lower right.

Another one of the first major developments on the new North Fairview was the New Horizons adult community. Still there today, it’s called Encina Royale. In the upper right you can see the early Fairview Shopping Center. Looks like Thrifty’s and TG&Y maybe?

This New Horizons ad touts the convenience of Goleta as an “outer area of Los Angeles”. Developers were trying to make Goleta a suburb of Los Angeles as soon as Lake Cachuma was finished.

With the construction of the Calle Real Shopping Center, North Fairview and Calle Real became the epicenter of Goleta commerce, pulling all the action away from Old Town.

By the early 1980’s , the area between the highway and the foothills was pretty much all developed.

Today, Fairview Avenue is a bustling thoroughfare and one of the main arteries through Goleta.

And the view, well I guess it’s still fair…