A funny thing happened.
I got a phone call from Jay Allen saying he had an old photo of Goleta he wanted to give me. I was honored and said heck yes, I’d love to see it. The next day, I get an email from Rob Evans. He too had an old photo of Goleta he thought I should have. Weird coincidence, I thought, but cool. I’d love to see it. Weirder still, they were both the same photo! They hadn’t talked to each other, they both just had the same idea, with the same picture, at the same time! So I figured I should find a little out about this shot and share it. 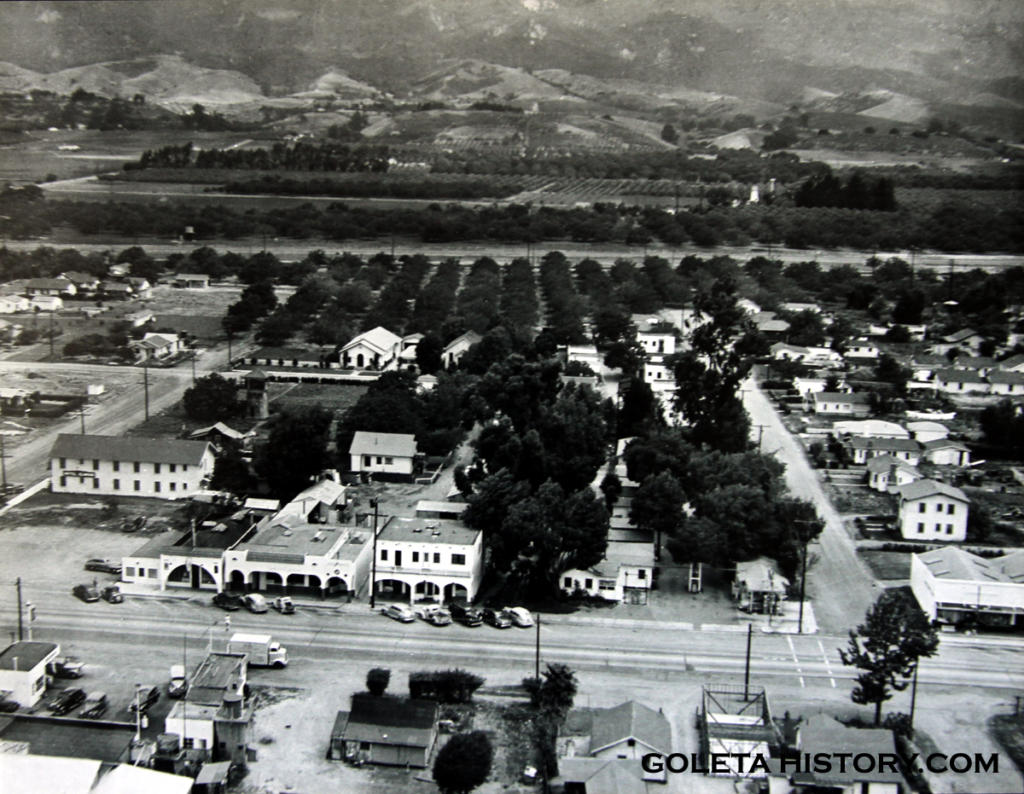 So this amazing photo was taken in 1948.
This is Hollister Avenue in the foreground, and on the right is Nectarine Street, which turns into Pine Avenue when it crosses Hollister. A lot of these buildings are still there. 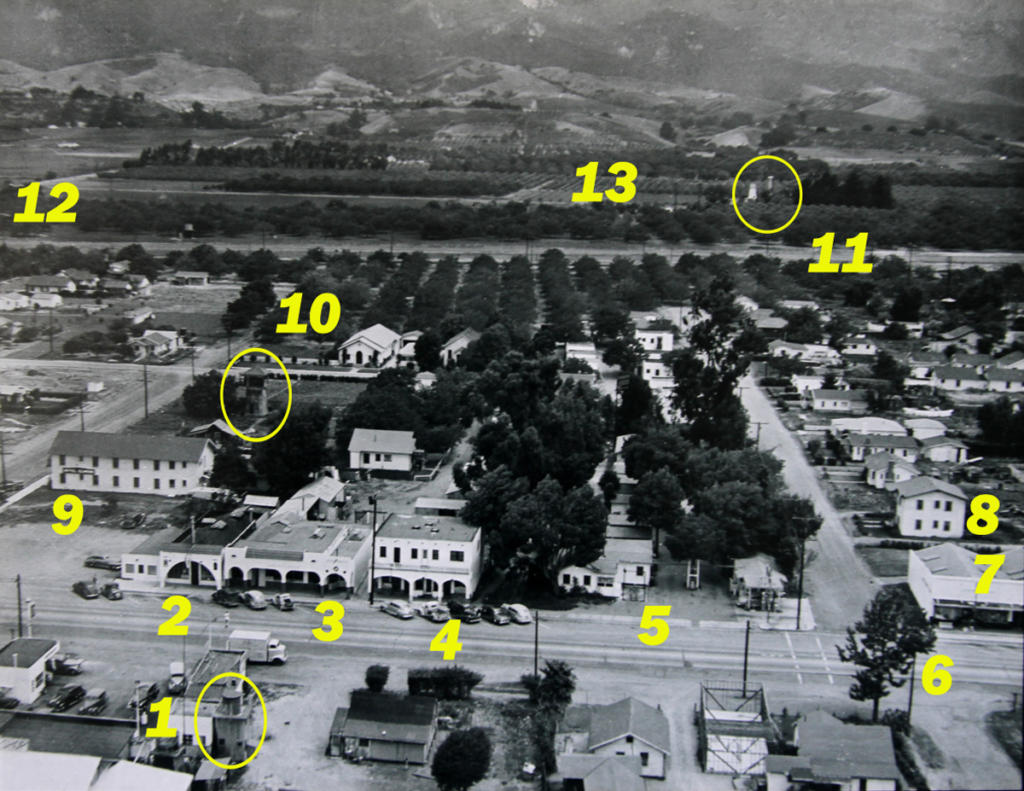 We broke it down like this, numbering the things we’ve found out about. The circles are around water towers, since this was before Cachuma Dam was built, the water came from wells. 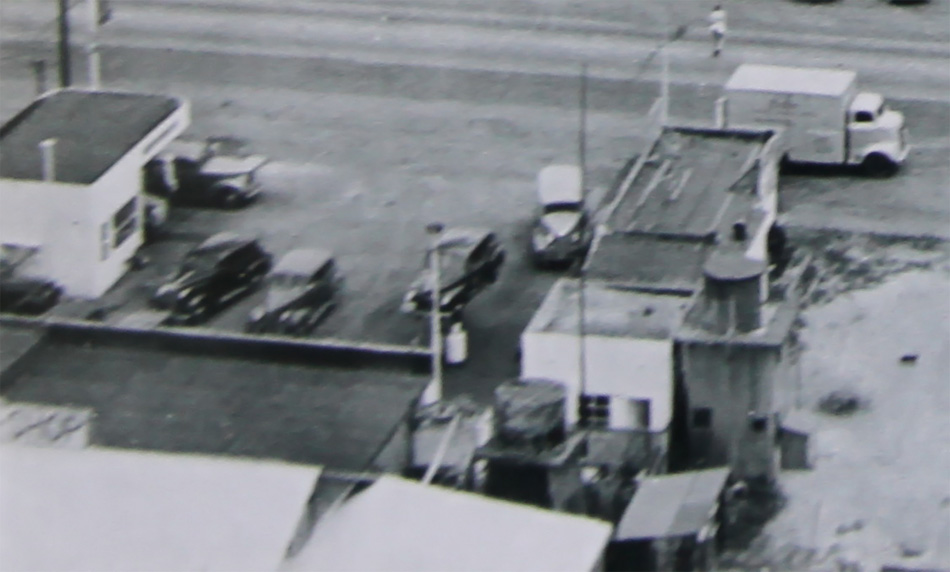 Number 1 is a gas station.
Lifelong resident Joe Kunze was one of my sources on this. He says it was called the White Spot. Why? He wasn’t sure, it just was. Maybe the owners name was White. Check out the cool sedans and the delivery truck. Classic. 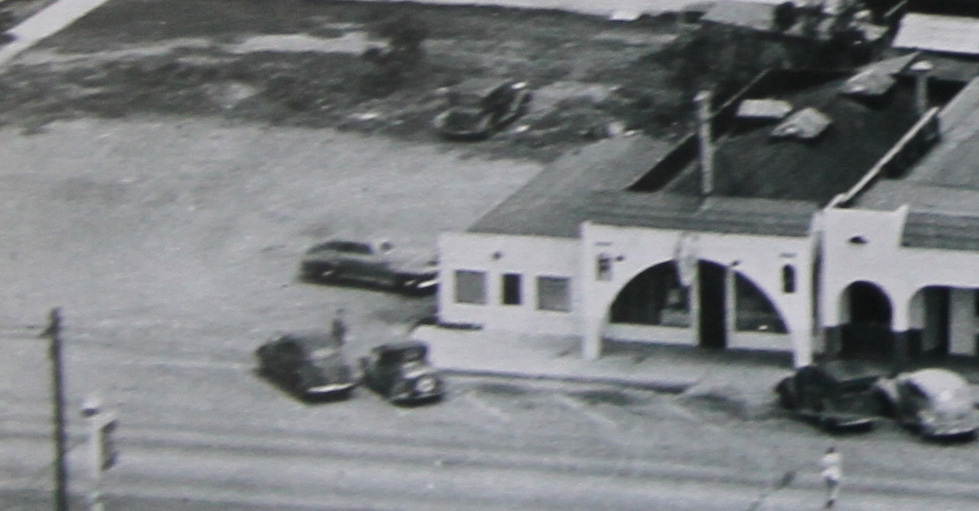 Number 2 is a bar.
Goleta native Mike Phillips says it was called the Silver Dollar.
Pretty classic name. We can see a dude on the left going in for a stiffie. 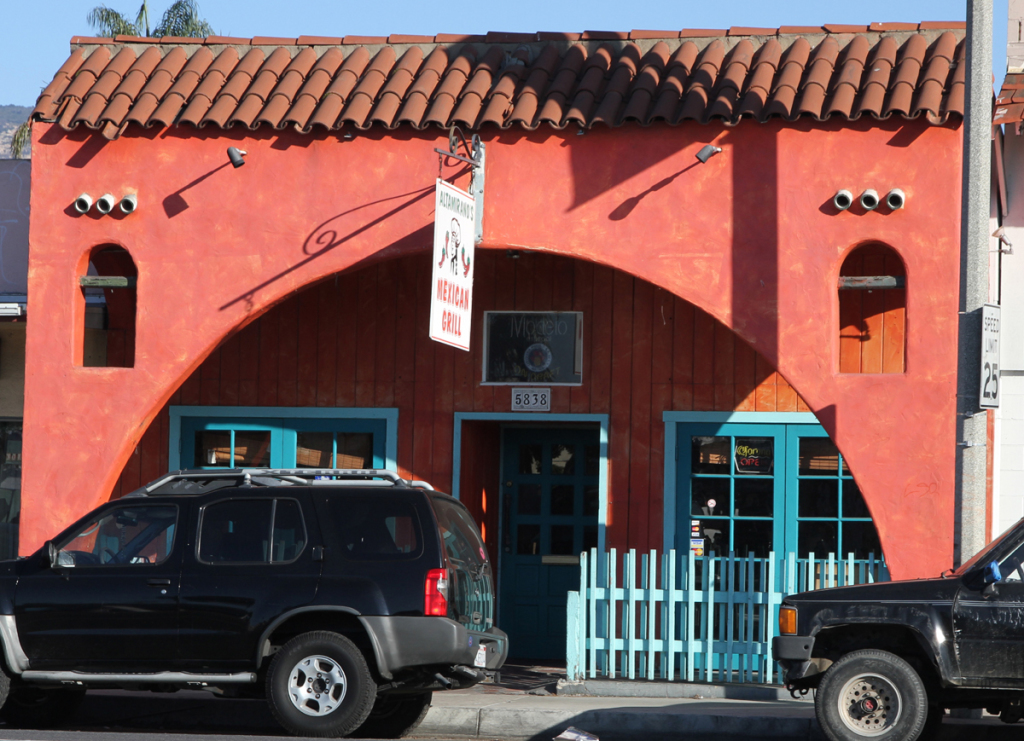 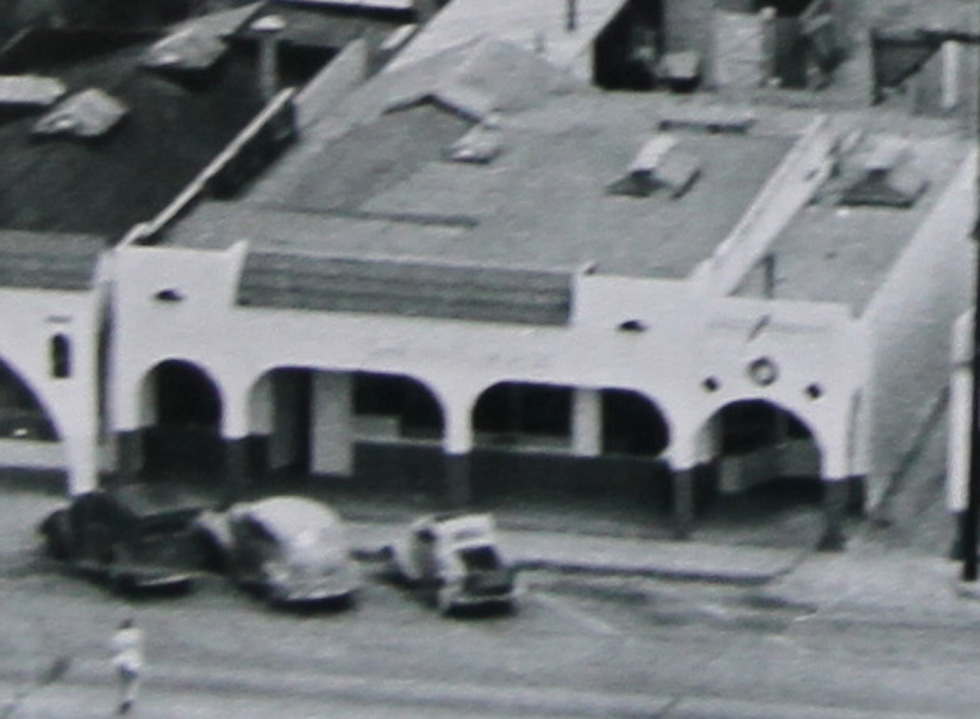 Number 3 was Crisman’s grocery store. Joe Kunze knows all about this place because he worked here for years. In the back you can see all the storage sheds. This building was demolished some time later. Notice the lady in the left foreground heading in and also the parked car with it’s rumble seat open. 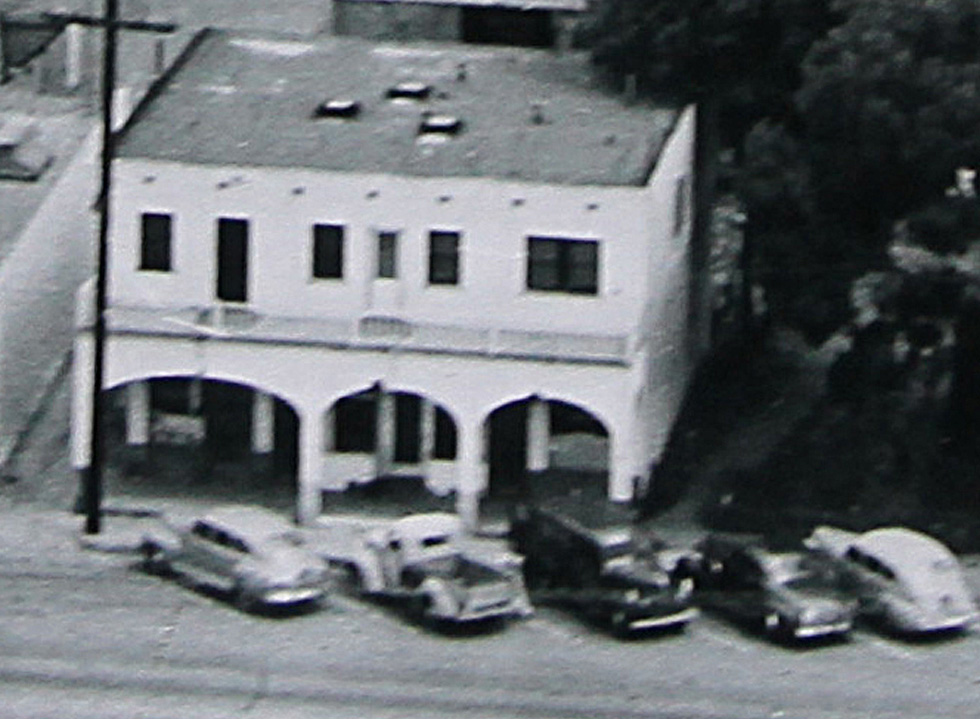 Number 4 was a real estate office and a barber shop. 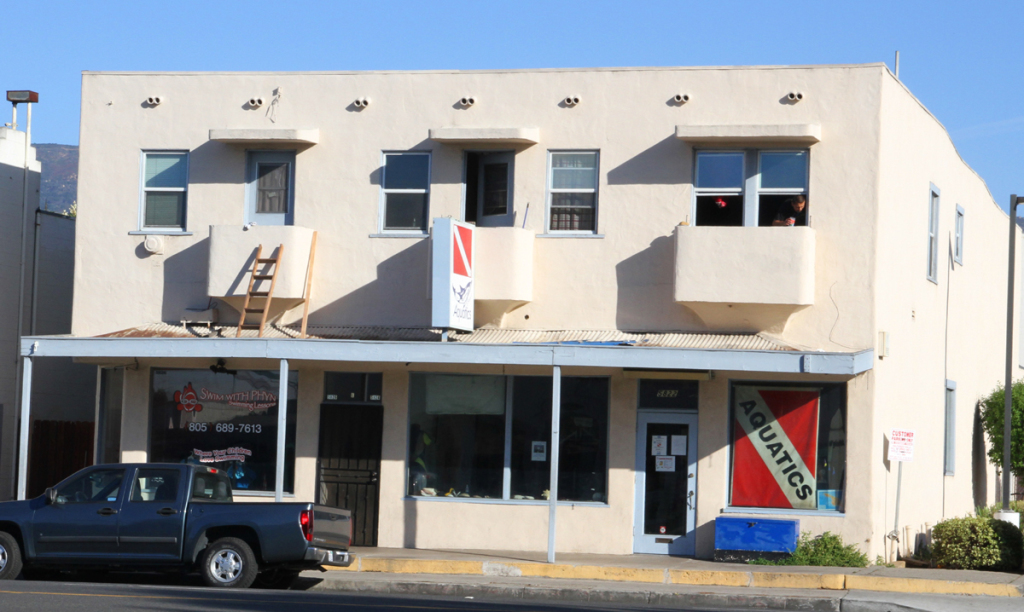 Today number 4 is Aquatics dive shop with apartments on top.
The arches are gone, but everything else is about the same. 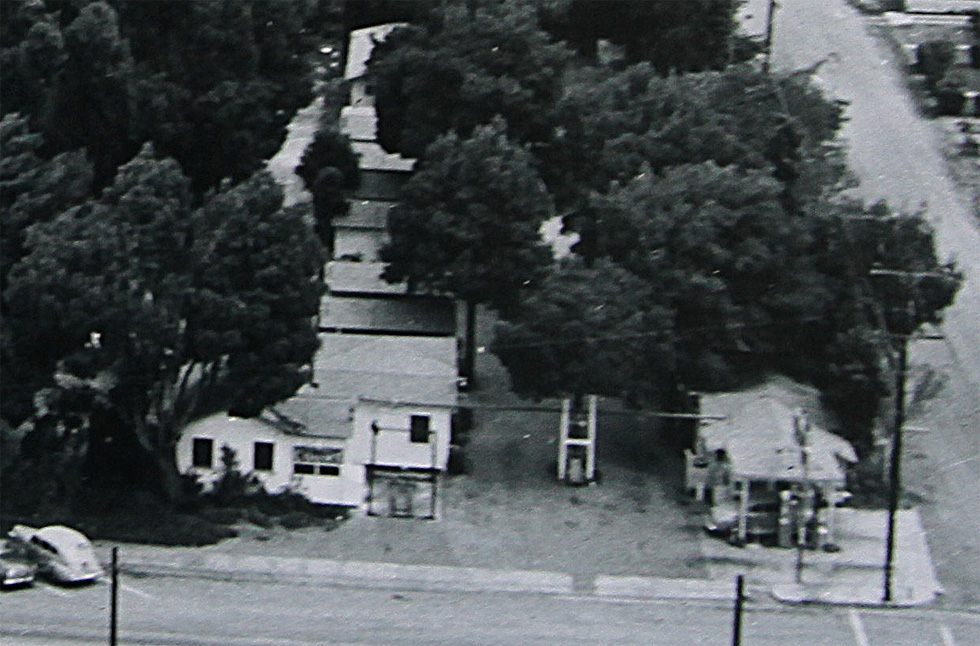 Number 5 was called the Camel Auto Court. It was an early version of a motel with a gas station in the front. The rooms were stand alone little buildings, possibly originally used as barracks for the Marine base that was where the airport is now. 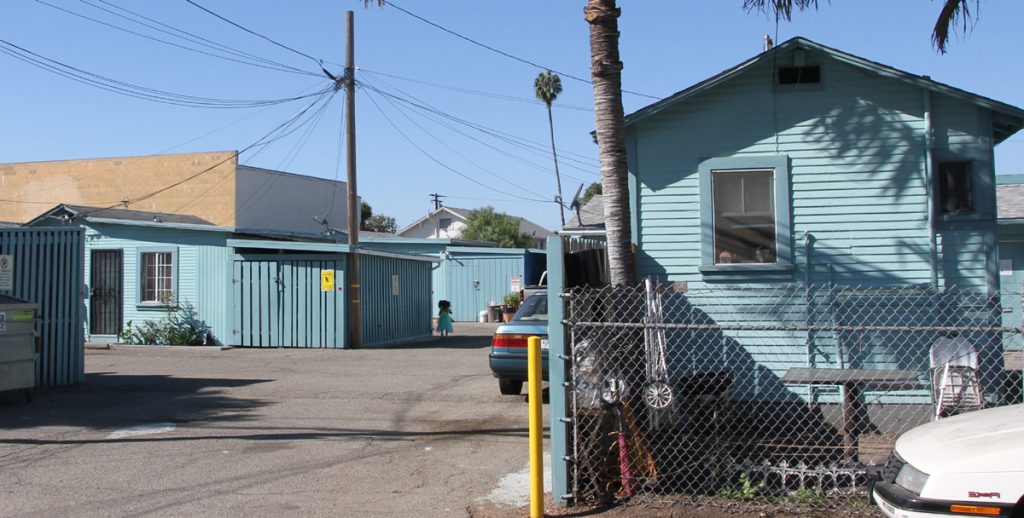 Remnants of the Camel Auto Court still exist and are being lived in, but where the gas station once stood is now a 7-11. 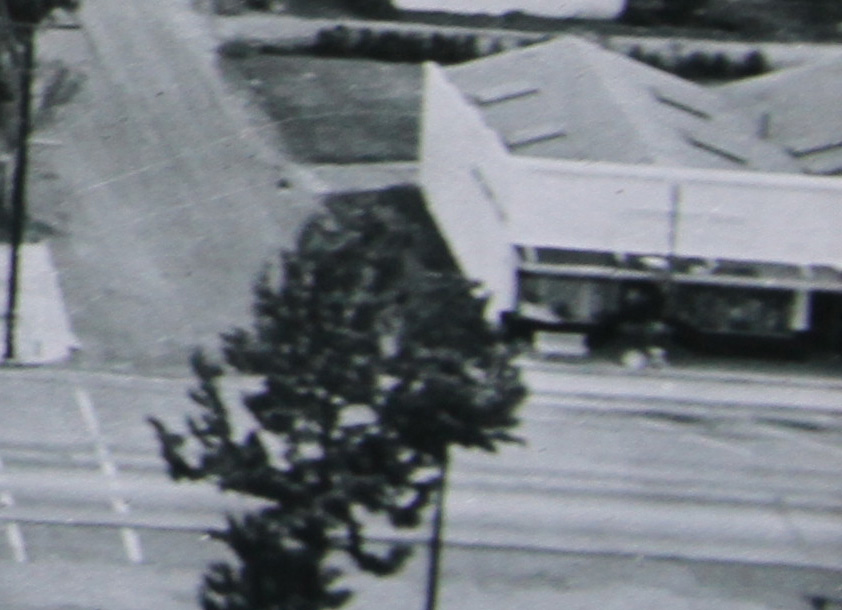 Number 6 is the intersection of Hollister and Nectarine/Pine.

Number 7 is this building that was a department store. Mr. Phillips recalls this as being Gray’s. The first place in town to buy Hang Ten shirts. Kind of a big deal for a surf rat. 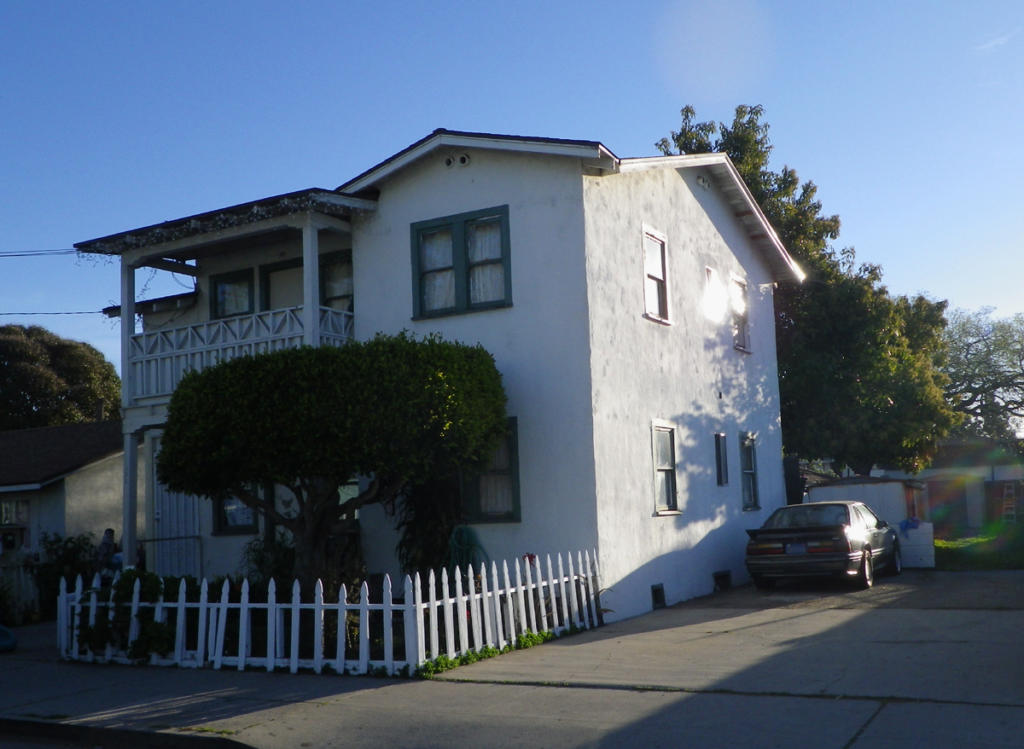 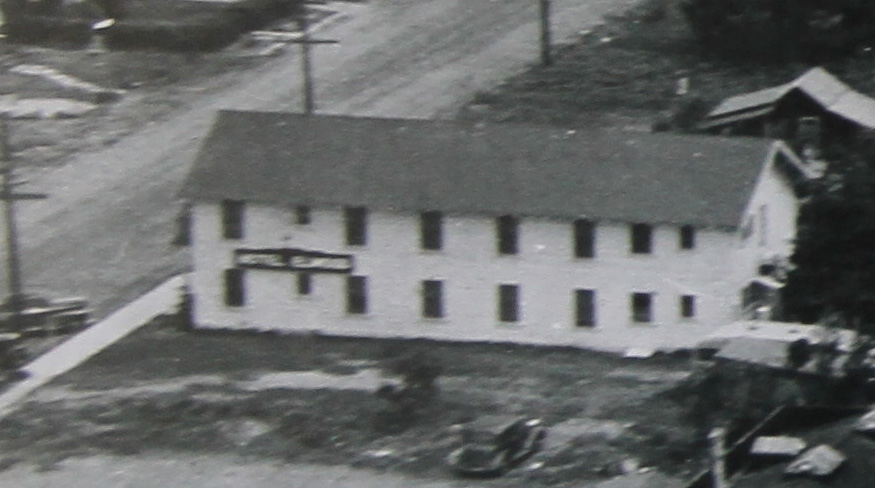 Number 9 was this hotel. Can you make out the name?

It looks like Hotel Ellwood maybe. Which would be appropriate because Judy Ensign, another Goleta native, says Ellwood Cooper, a Goleta pioneer, died in this building. Judy would know, because her parents bought part of Cooper’s ranch in the Winchester Canyon and that’s where she grew up. 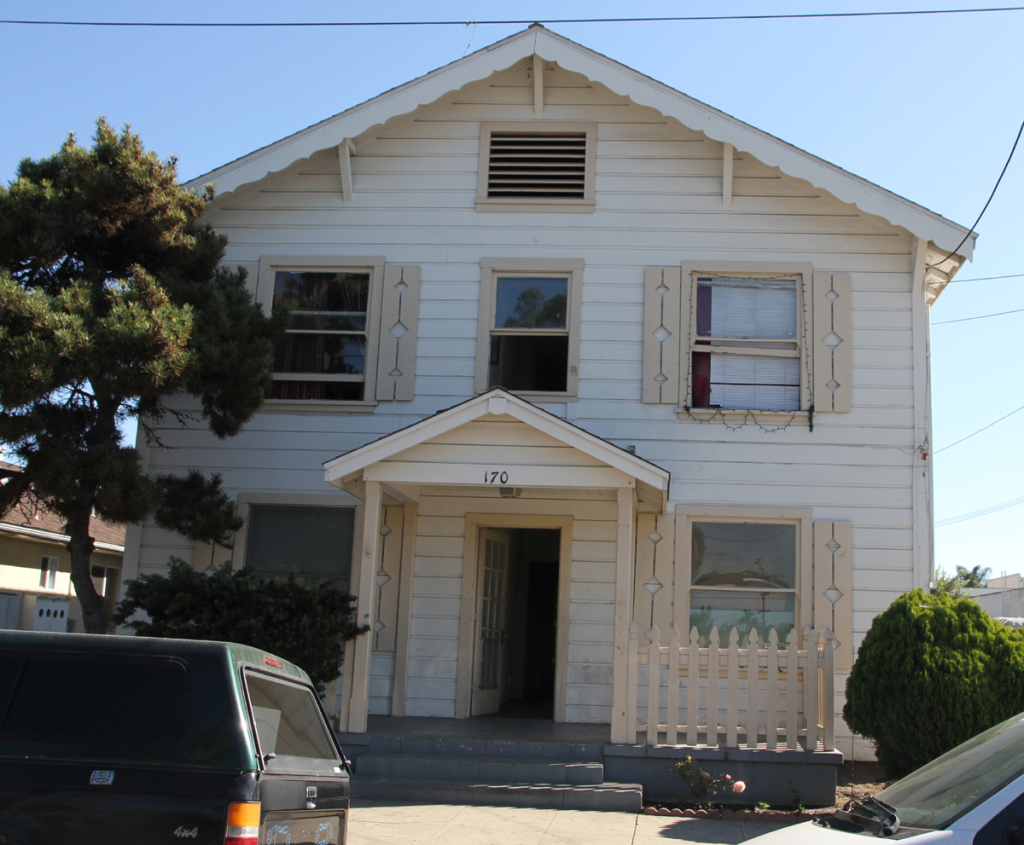 Here it is today, serving as an apartment building. 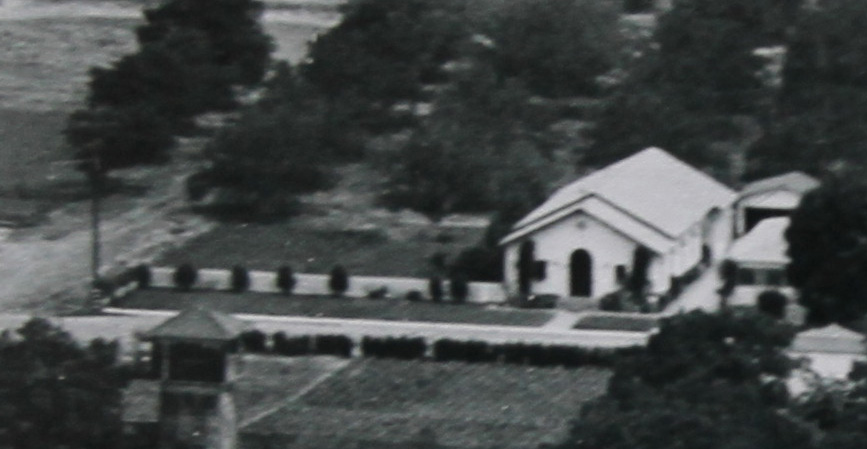 Number 10 was an early location of St. Raphael’s Church. The building was moved to the church’s present location and served as the parish hall for years. Unfortunately it was recently demolished.

Number 11 was, and still is the railroad. At first glance, you might think that’s the freeway, but it’s not. The freeway did not exist yet. The only through road was Hollister Avenue. Numbers 12 and 13 didn’t exist yet either: the Fairview shopping center and Calle Real. Just lots and lots of agriculture. Looks pretty good to me…
Thanks to Jay Allen, Rob Evans, Joe Kunze and Judy Ensign.
See the actual photo hanging in Santa Cruz Market in Old Town. 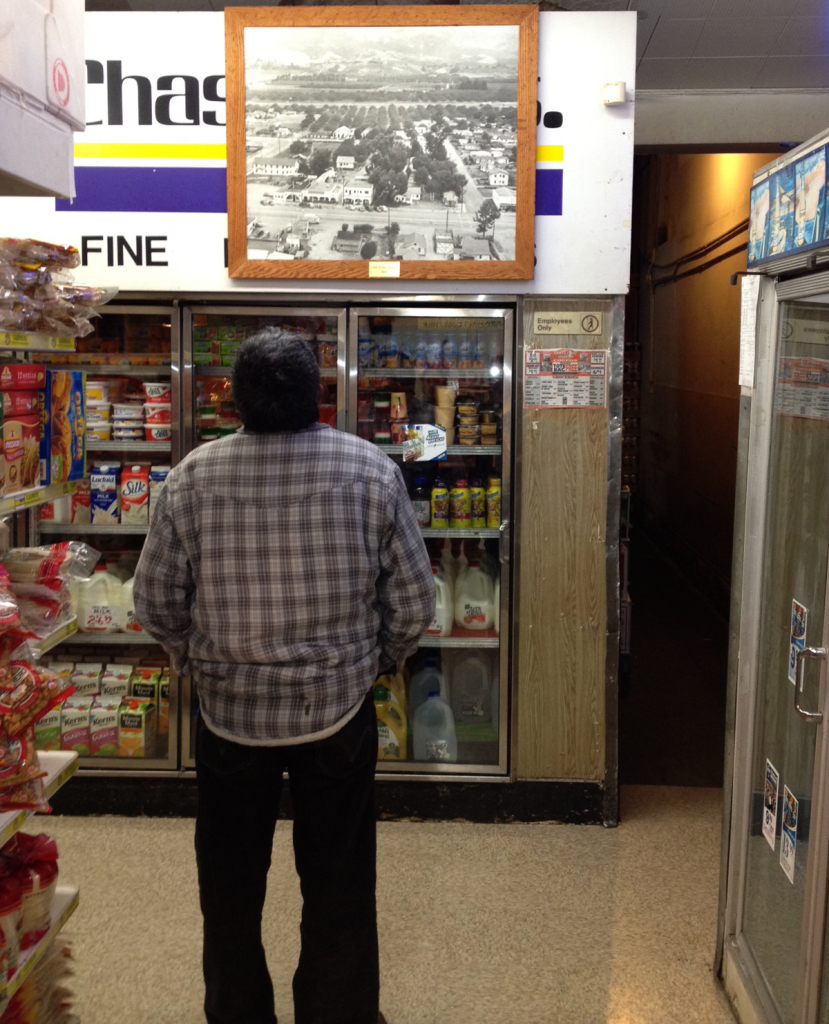 P.S.
After we published this page, we got a lot of response and some additional information we thought we should share….
Further information regarding St. Raphael’s Church:
The Old Town location was the 2nd location. The original was on the corner of Hollister and Fairview where Jiffy Lube now is. In 1996, I co-edited a book on a 100 year history of St. Raphael’s and have photos to show original building site with church.
-Wayne Rascati-

It was never used as barracks. I’ve been inside one original bungalow and it has all custom Catalina-style tile and is darling with a full bathroom and mini-kitchen. This was one of the first auto courts but it quickly became long term housing post WWII for young families because there was a severe housing shortage in Goleta before the tracts were built.

It was not a barber shop but Mie Ota’s beauty salon where she had clients such as Hollister family members. Mie became known for her fine styling and was popular for decades.