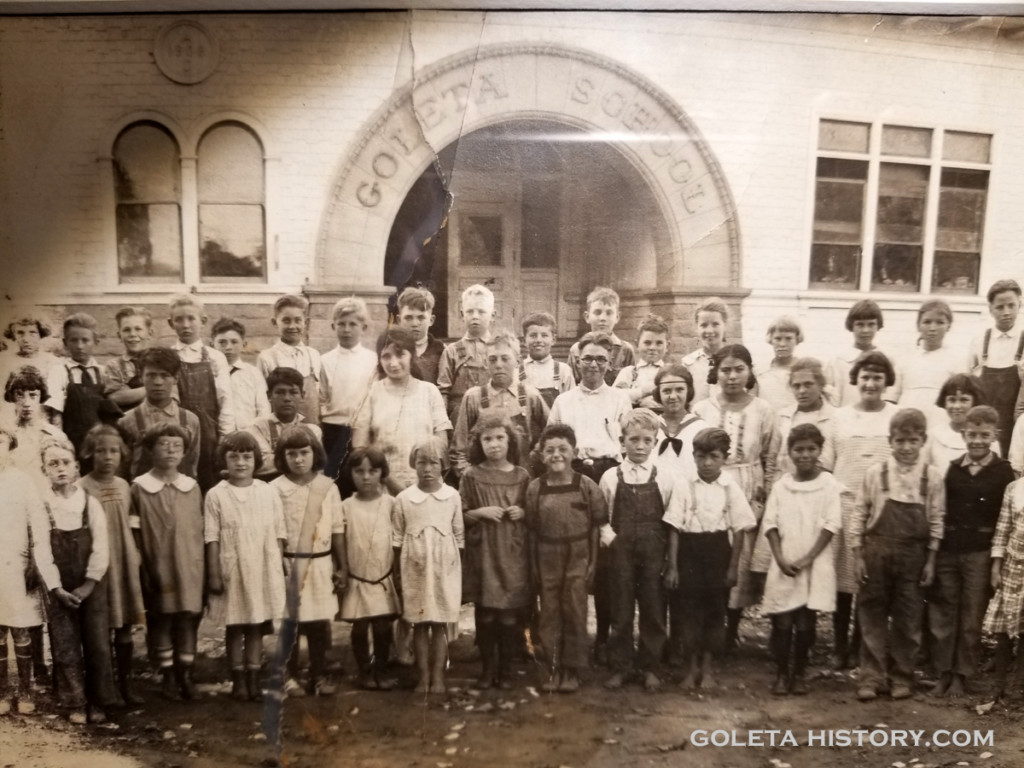 Goleta native and history aficionado, Judy Ensign, recently let me borrow this great photo of Goleta school kids from 1925. They are standing in front of the Goleta School, not to be confused with the Goleta Union School on Hollister Ave. 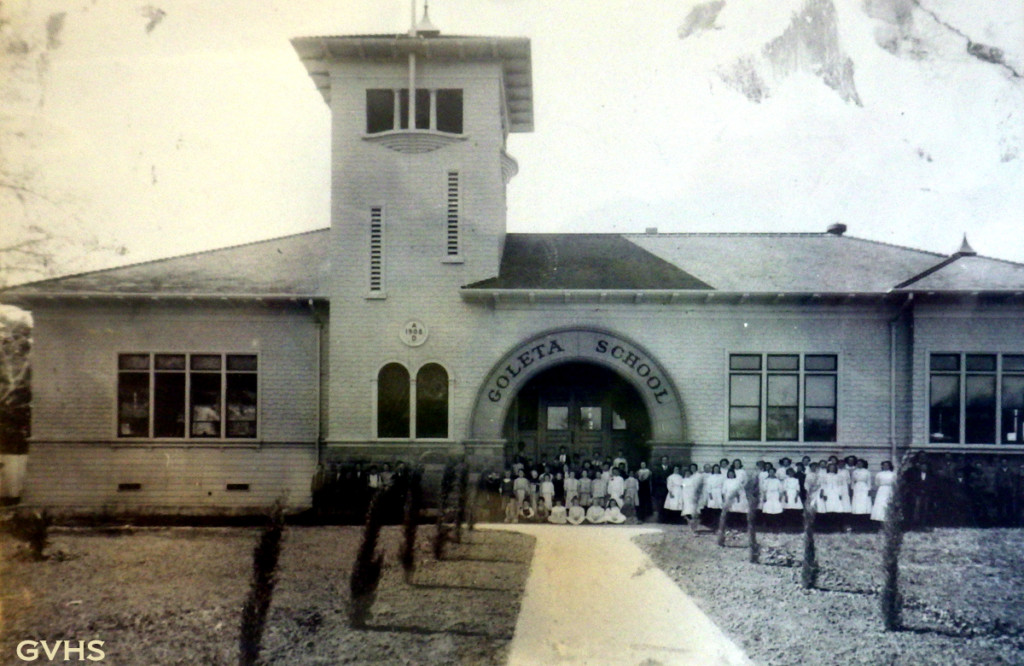 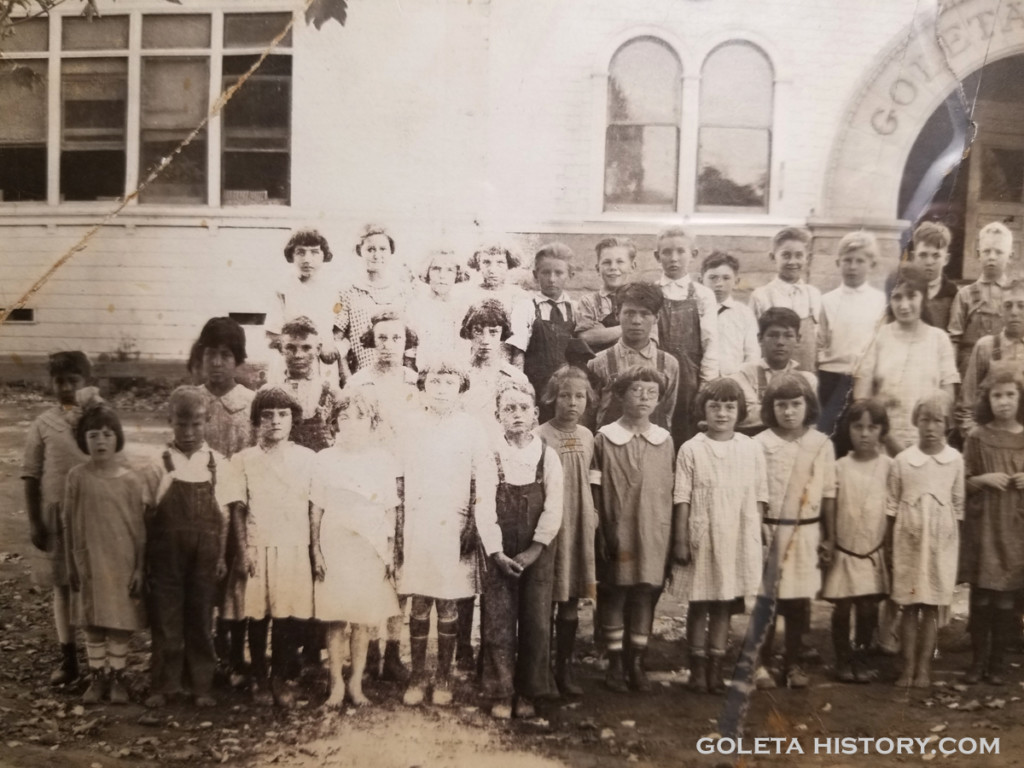 Looking closely at Judy’s photo, I couldn’t help but wonder what life was like for these kids. 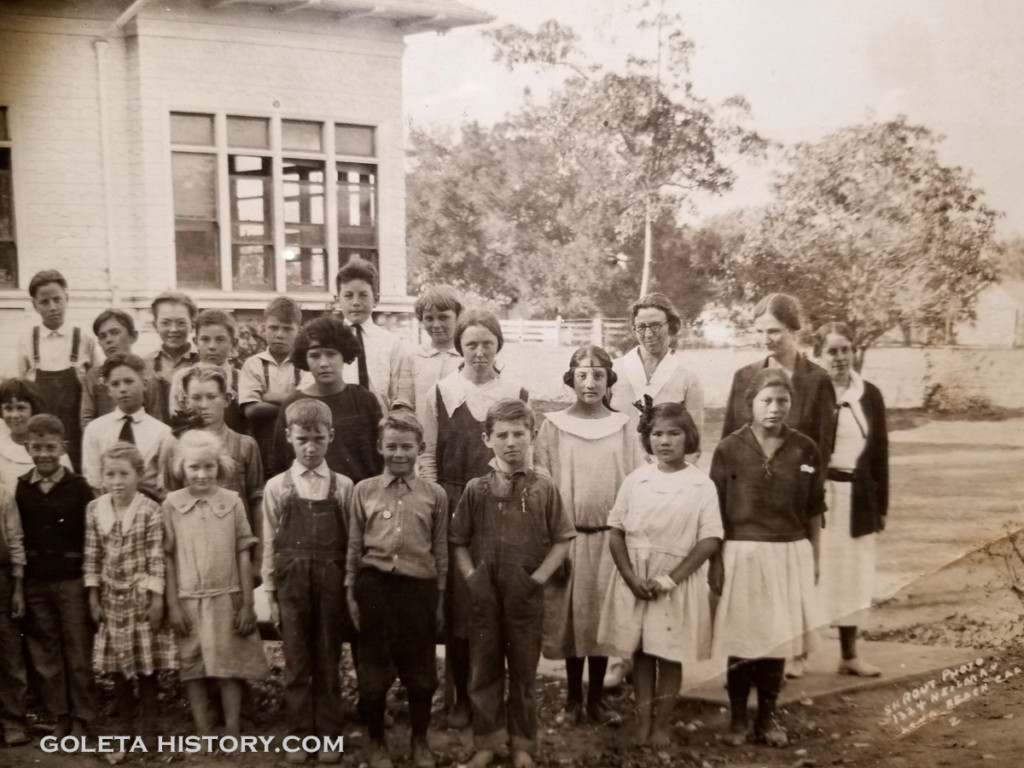 What hardships they faced and fun they had. And their futures….. 1925, America was about to go through some hard times… 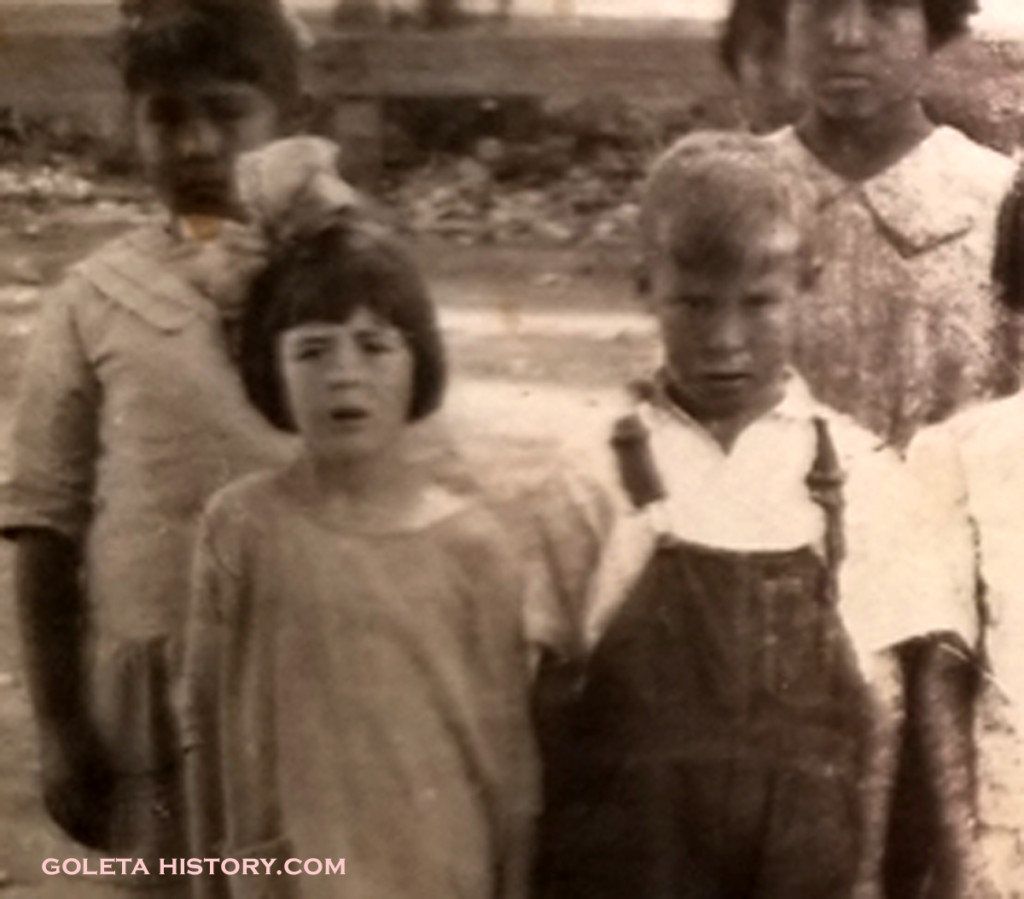 So I started really zooming in on these kids, trying to get a feel for their mindset. How hard was their life? Or was it really “The Good Old Days”? 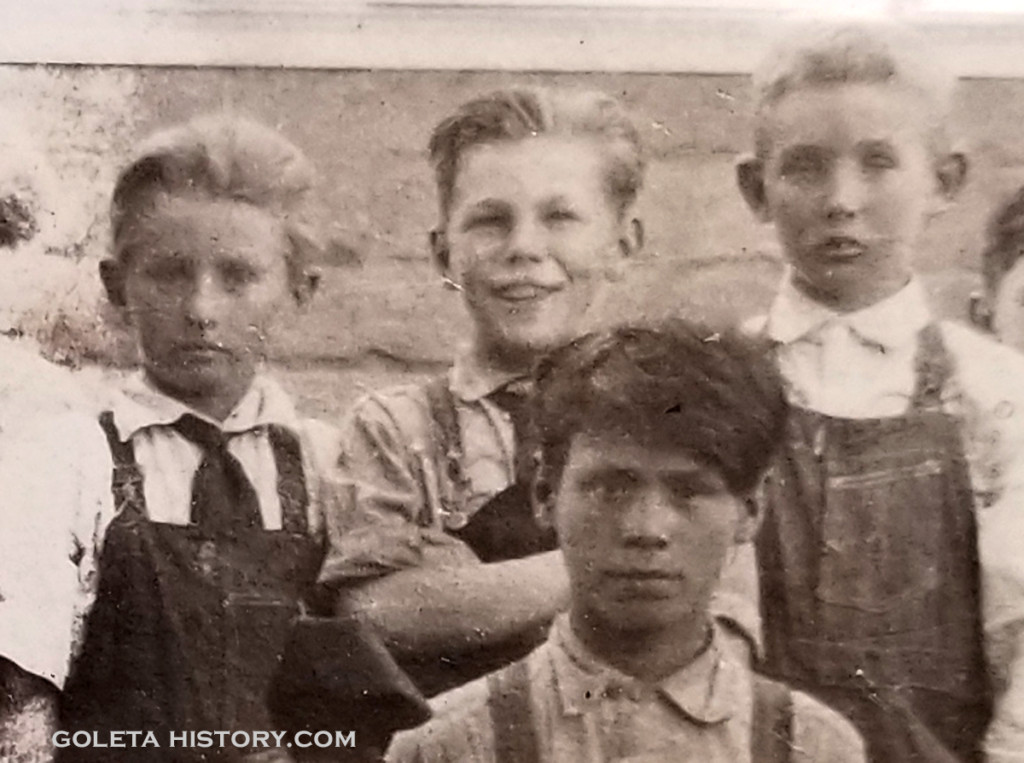 They say our kids today grow up fast, but some of these guys look wise beyond their years. And judging by their coveralls, looks like they probably worked after school, maybe before too! These kids were farmers. 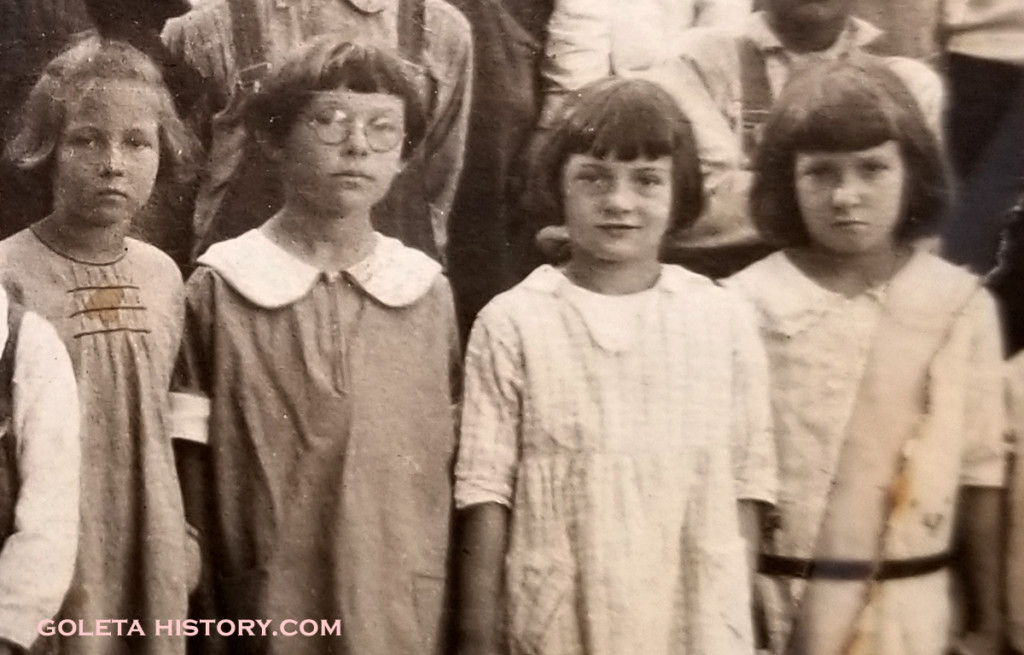 No fancy dresses for these Goleta girls and they also look quite mature. 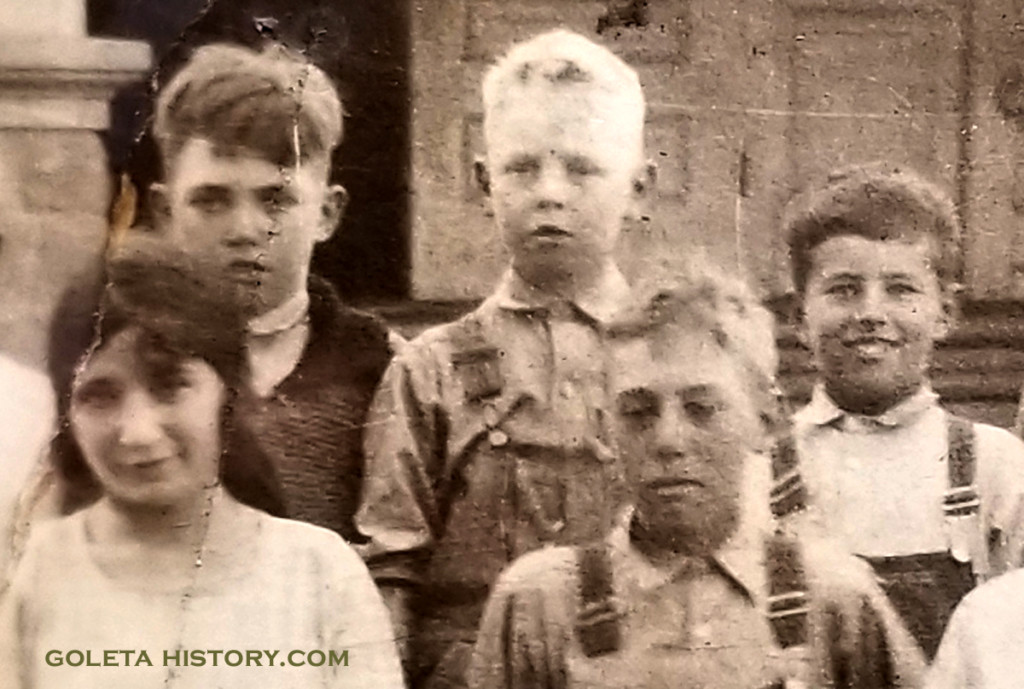 But kids are kids, and they’ll have their fun. 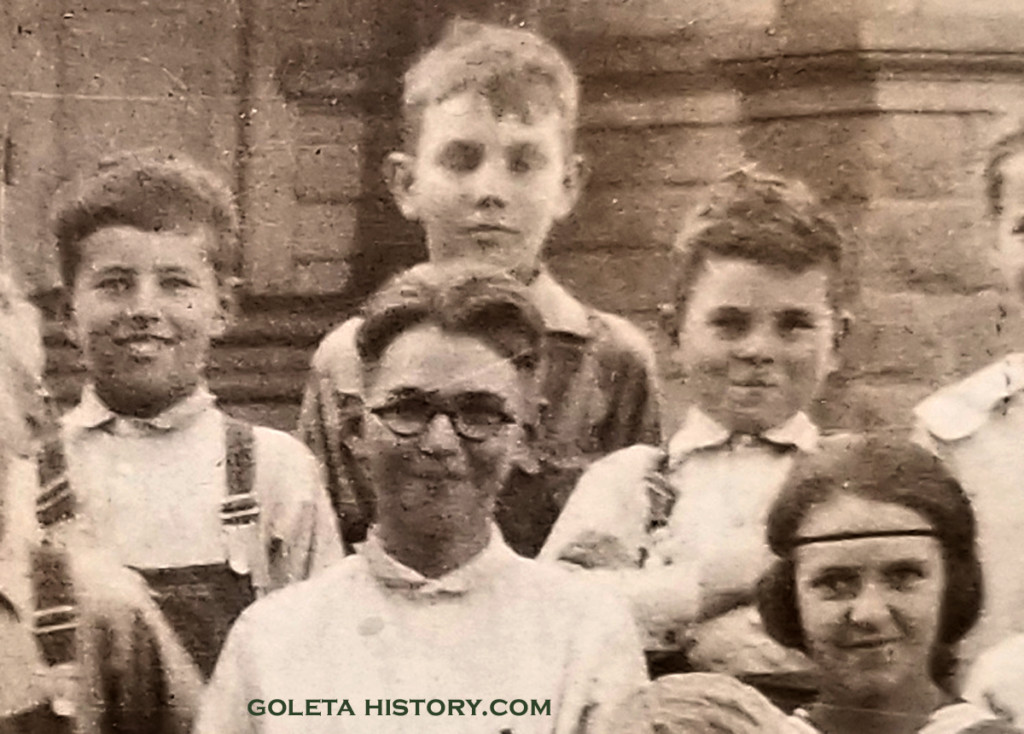 Looks like these guys were sharing a discreet joke . 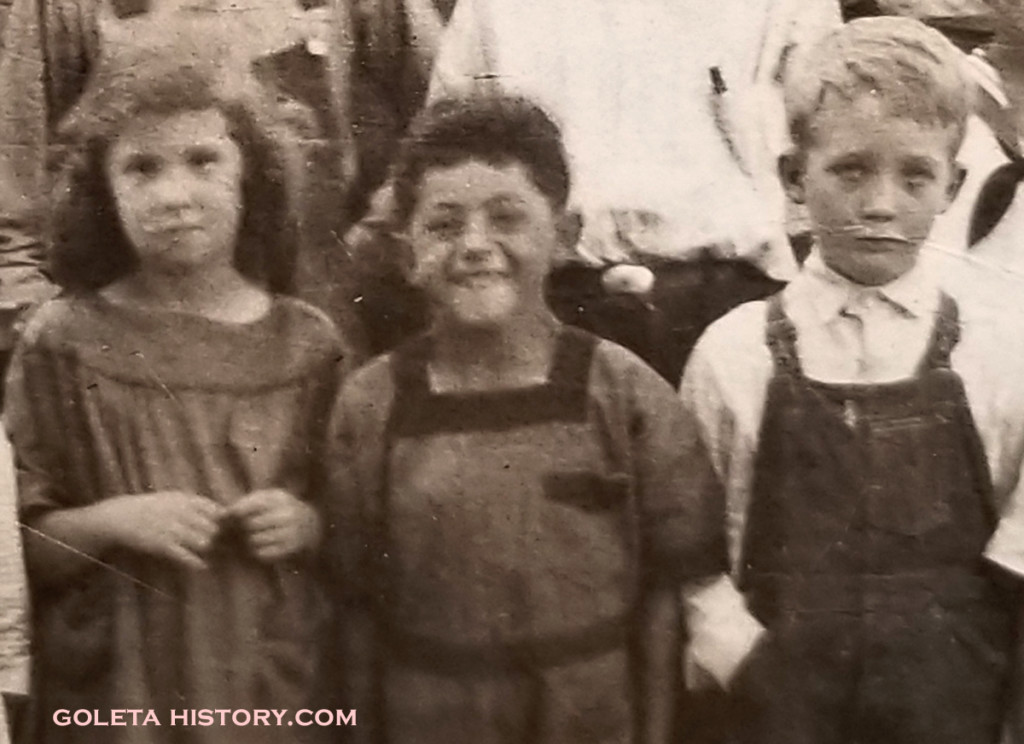 This guy, not so discreet… 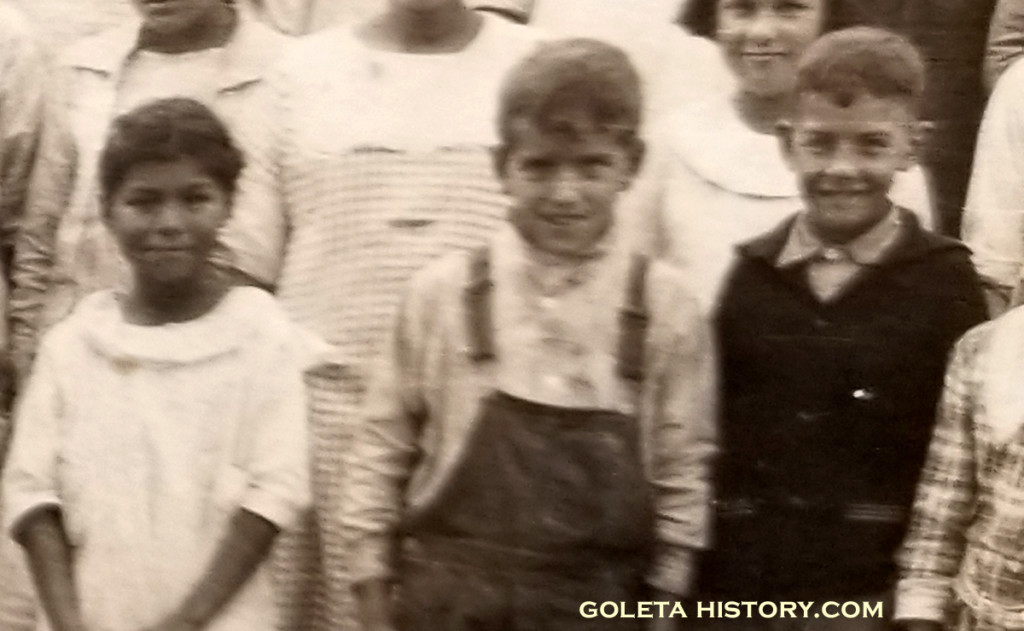 I see a little mischief in this guys eyes. 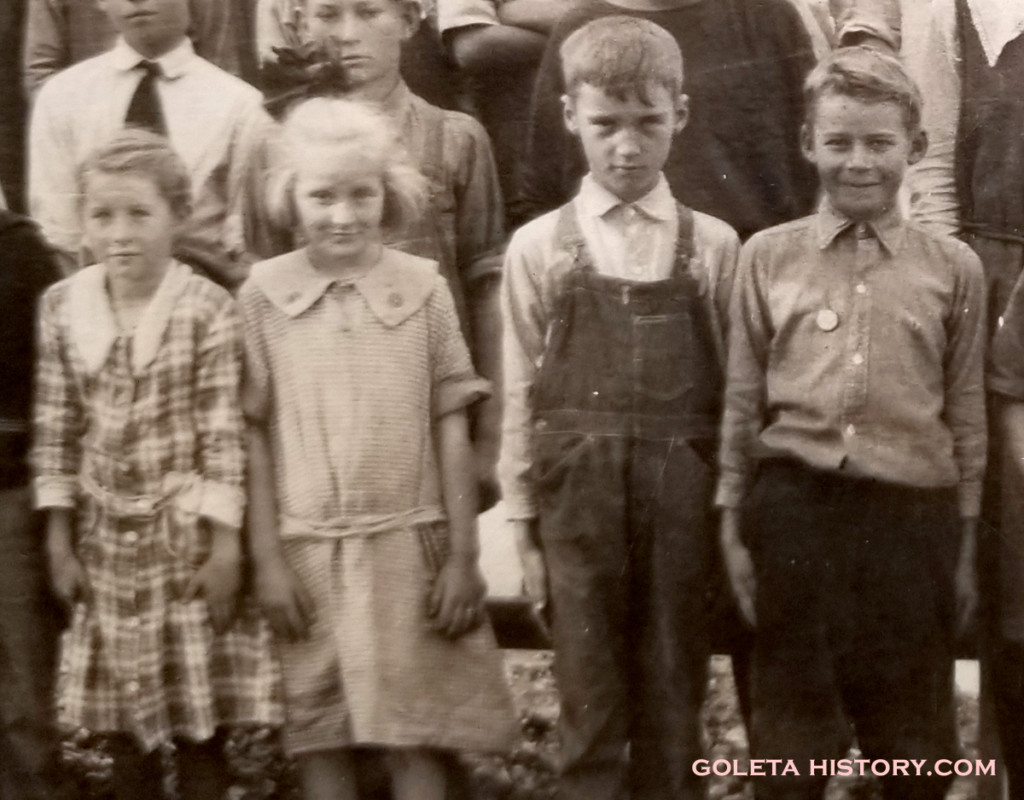 Someone told these kids to keep their hands at their sides… 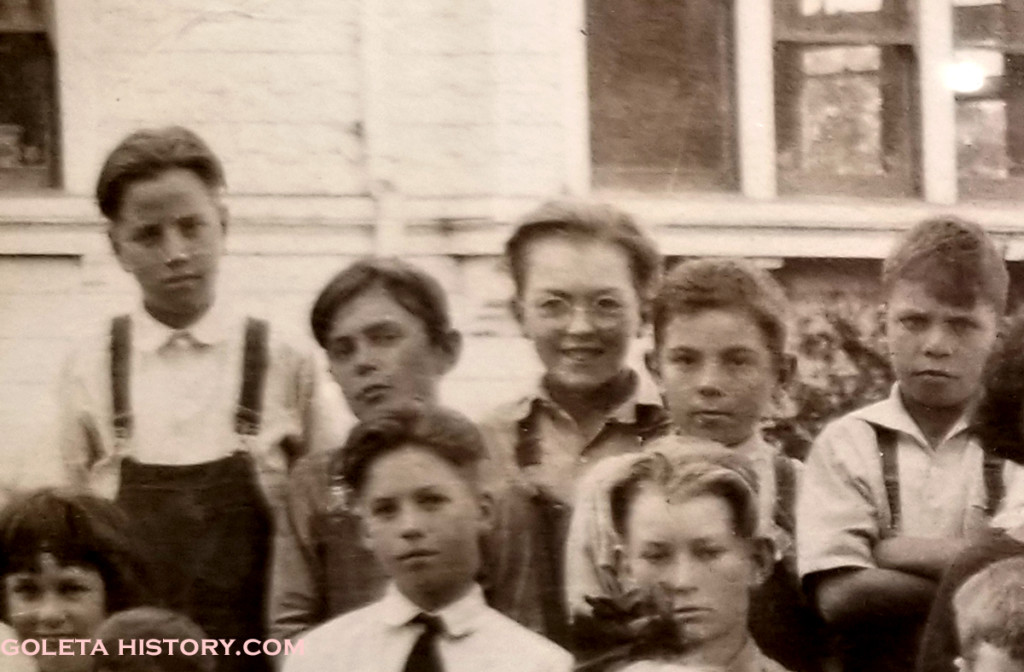 These fellows were probably in their late 20’s when we got into WW II. You gotta wonder how many of them served overseas and what they went through….. 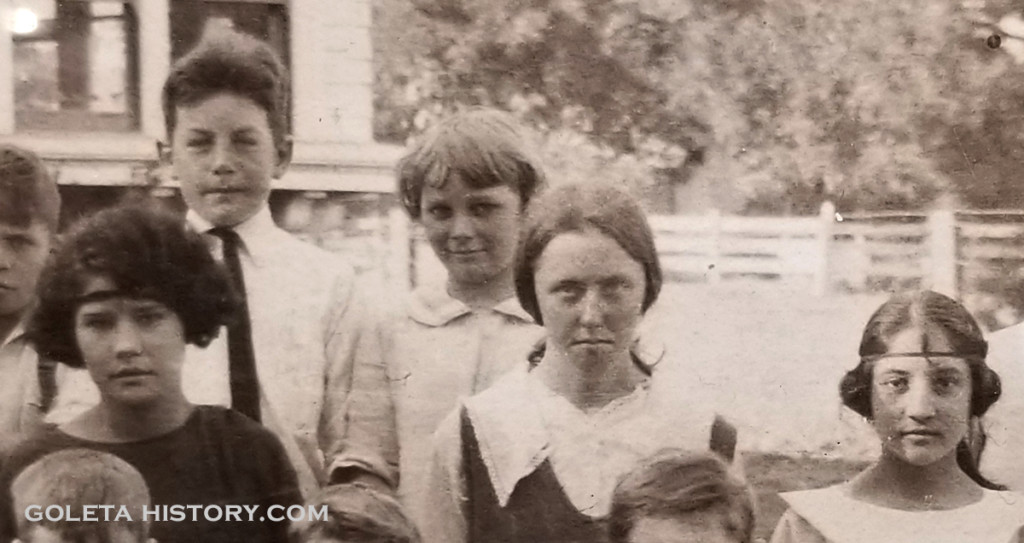 A couple of these gals are sporting a fad of the day. Flapper headbands. Probably about as fashionable as their teacher would allow. 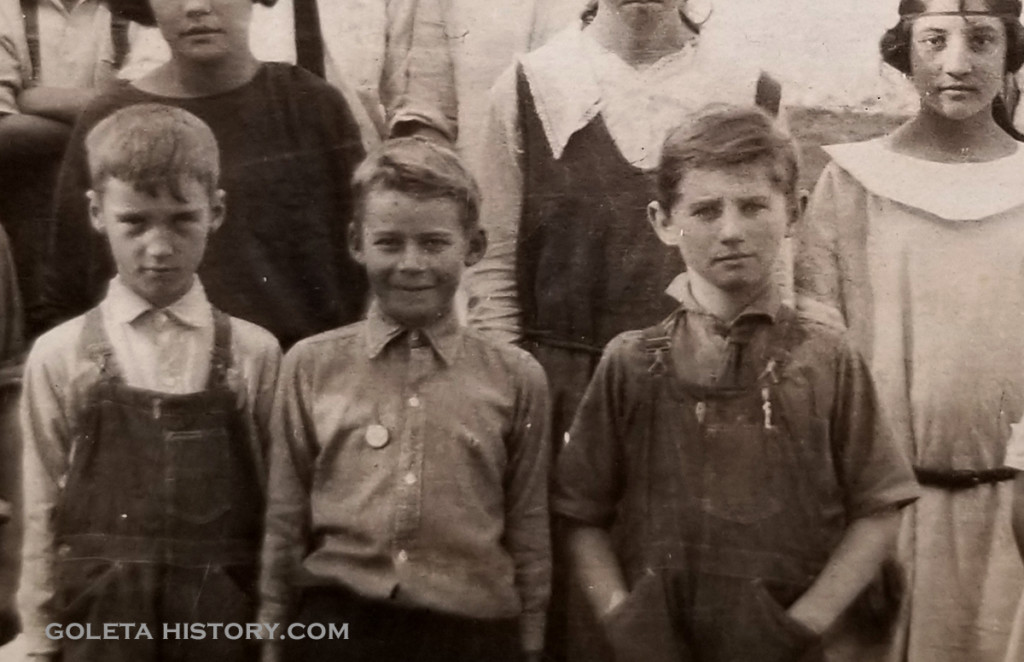 Curios what the little  button on this young man’s shirt said. And the fella on the right looks wise beyond his years. Even has a ink pen in his coverall pocket! Turns out that young man is George Begg. He grew up to be a welder, a farmer, a Sheriff’s Deputy and an investigator for the District Attorney! 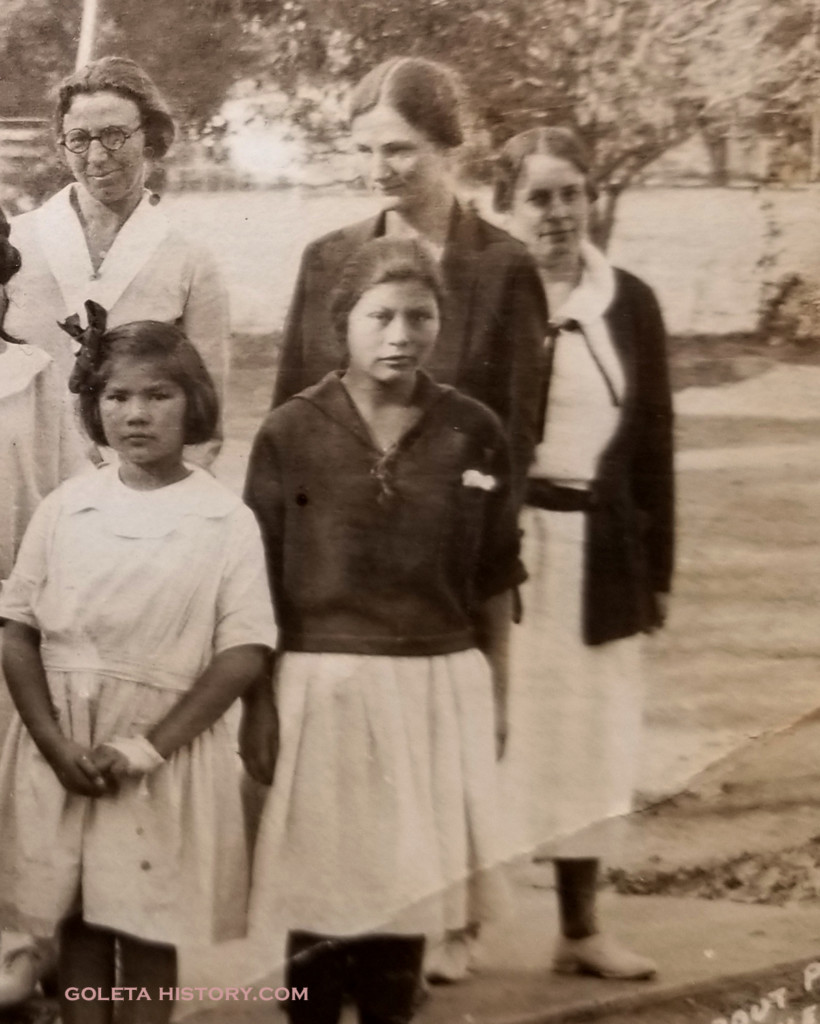 And let’s not overlook the all important educators, keeping a watchful eye over the entire scene. 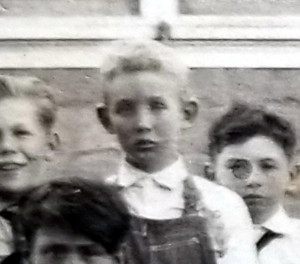 In the back row, you’ll find little Gene Lillard. This is Judy’s father and he was 11 or 12 when this was taken. 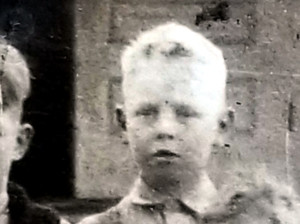 These are his brothers. 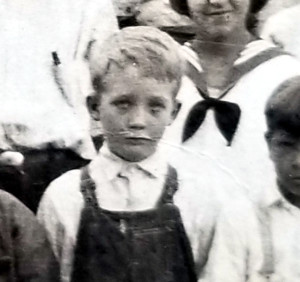 The amazing thing about these Lillard boys was that 2 of them went on to play professional baseball! 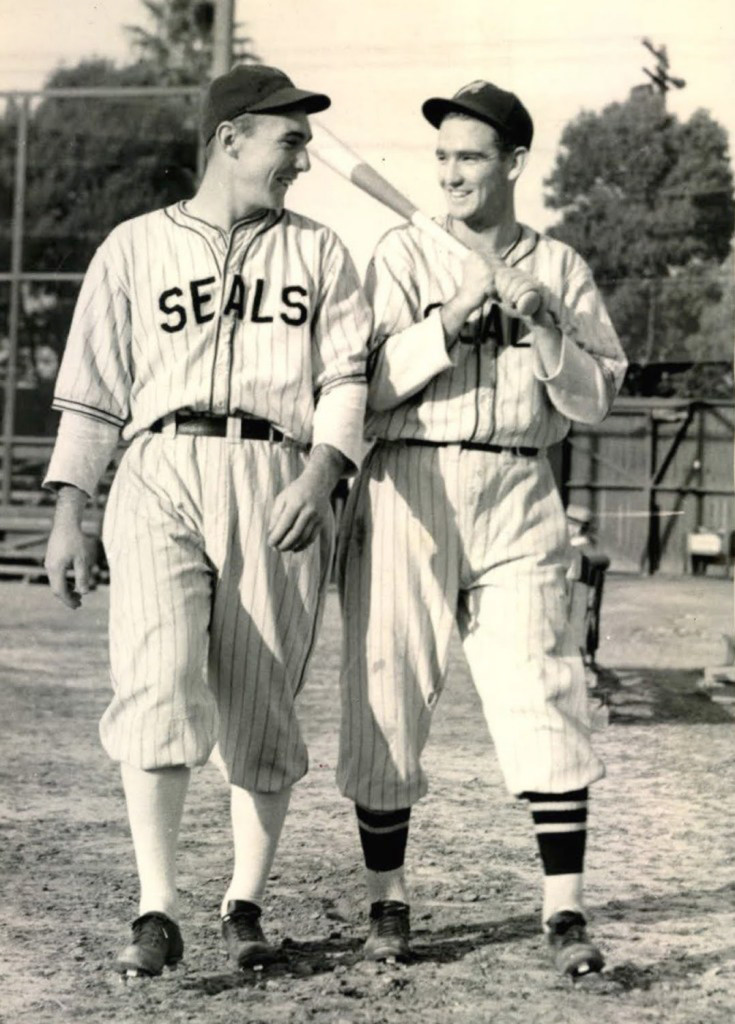 Gene and Bill Lillard both played for years in the minor league with the San Francisco Seals. 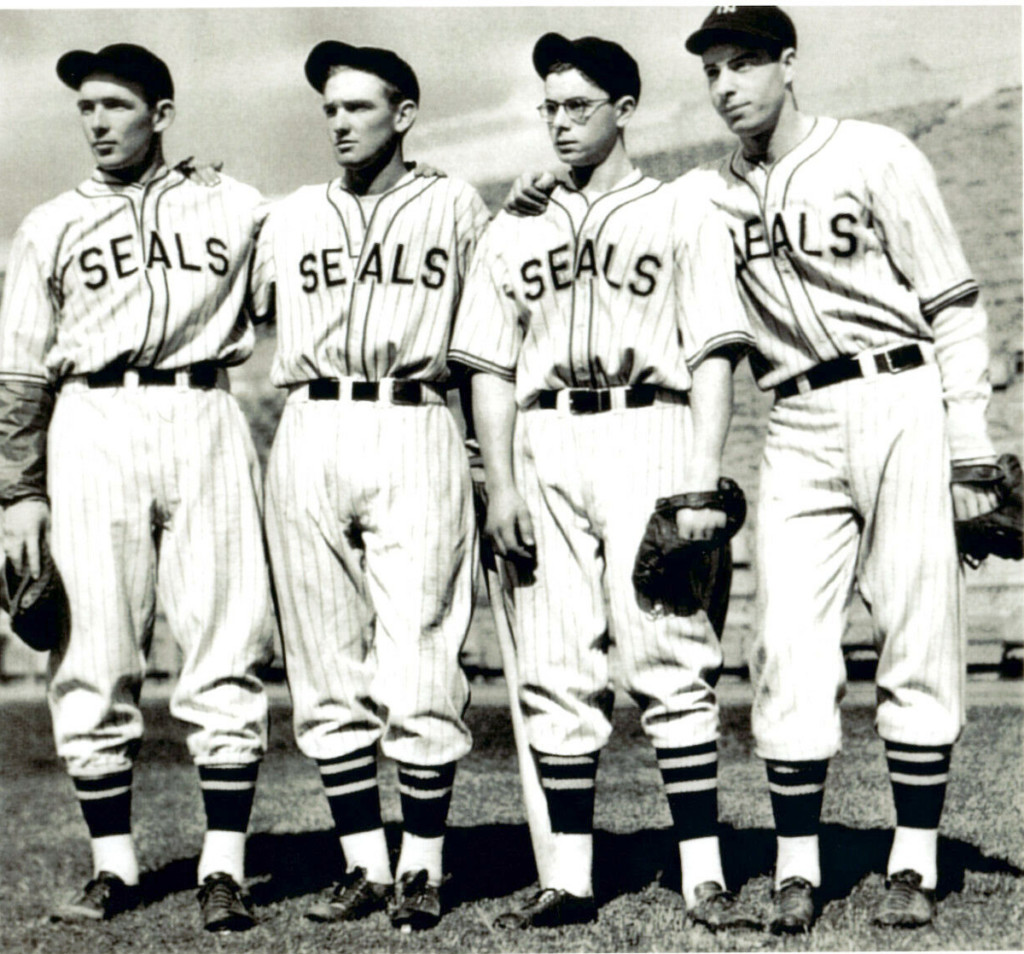 For a while they were on the team with another pair of brothers, Dom and Joe DiMaggio. Of course, Joe would soon steal the show… 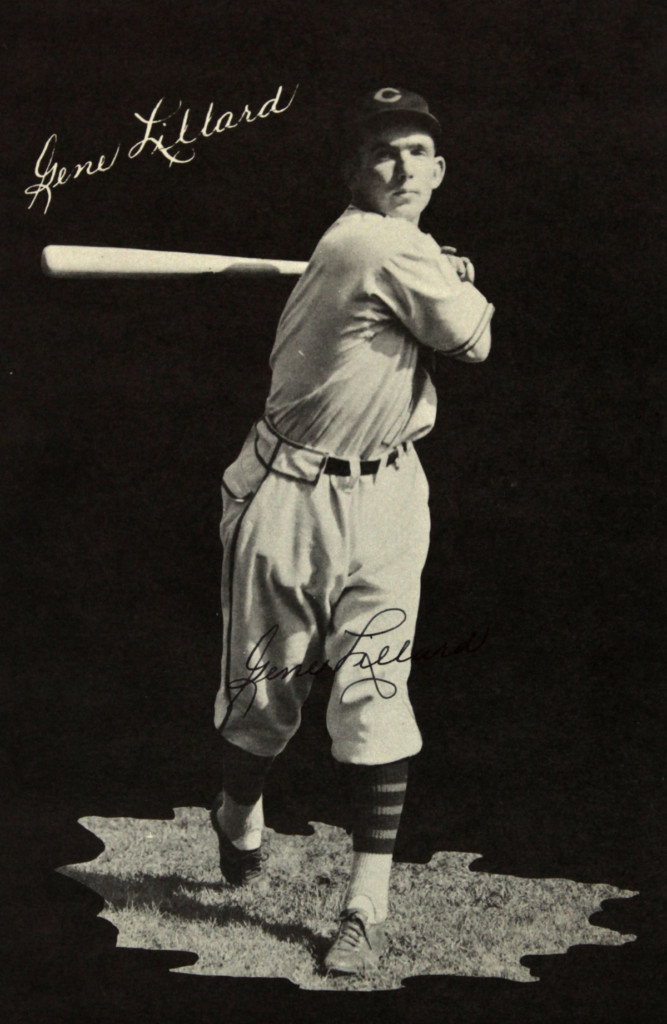 But, both Lillard brothers made it to the Major Leagues for a few years, playing for the Cubs, the Cardinals and the Philadelphia Athletics and the New York Giants. 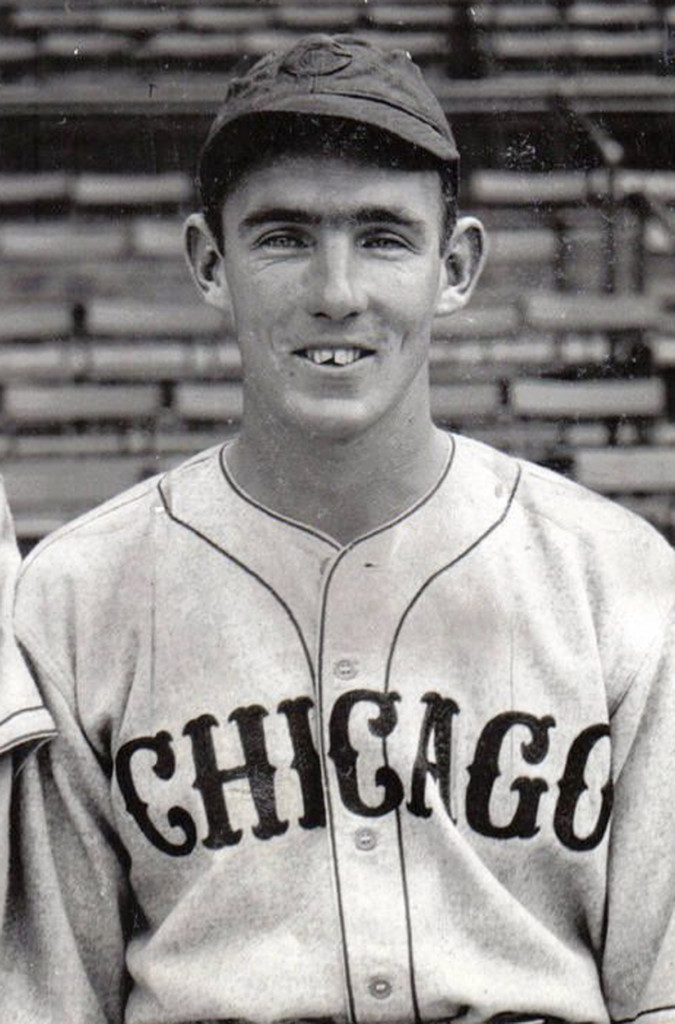 The War took Bill to the Pacific Theater where he was wounded and received the Purple Heart. Gene came back to Goleta and kept the farm running and started his family, which included Judy, who gave us the school picture! Quite a story, and I’m sure we’ve just scratched the surface……