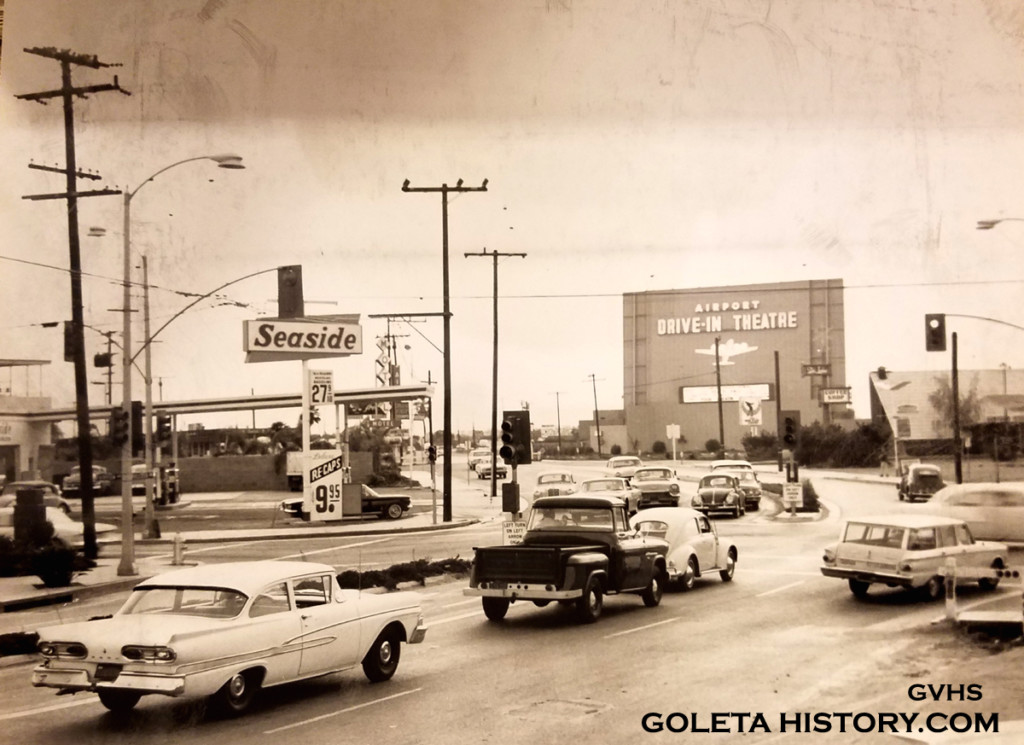 If you’re a local, this photo will trigger a flood of memories. This is the corner of Hollister and Fairview looking towards the airport in the late 1960’s. 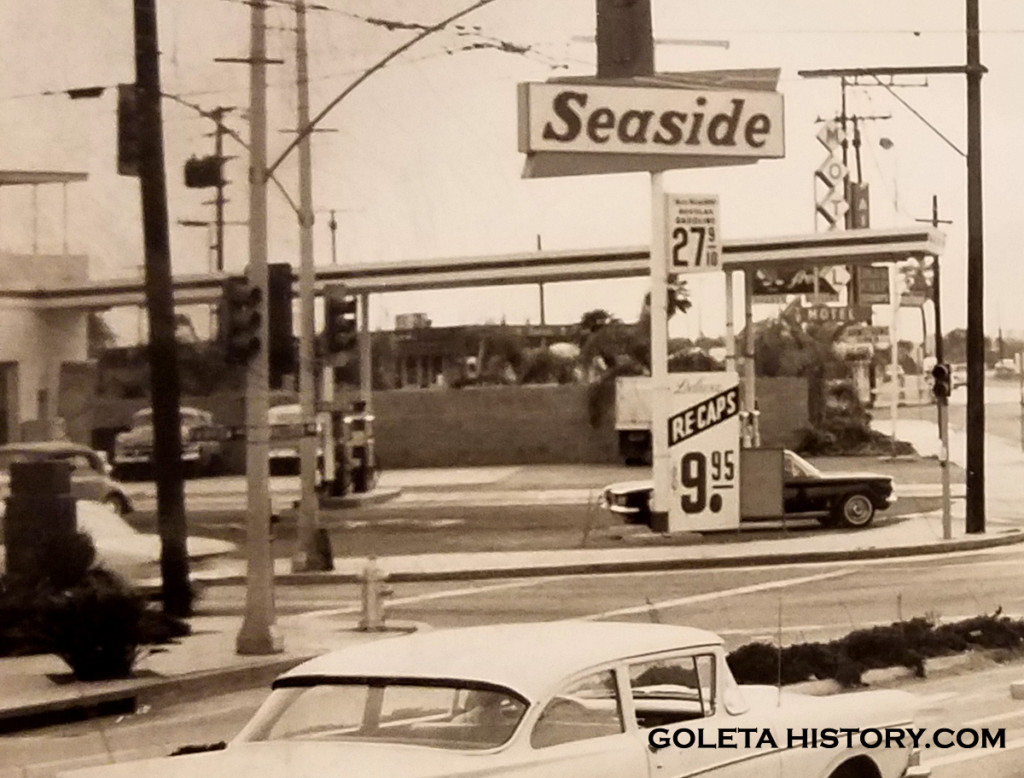 Gas at Bob’s Seaside service station was 27 cents a gallon, and recaps were $9.95. 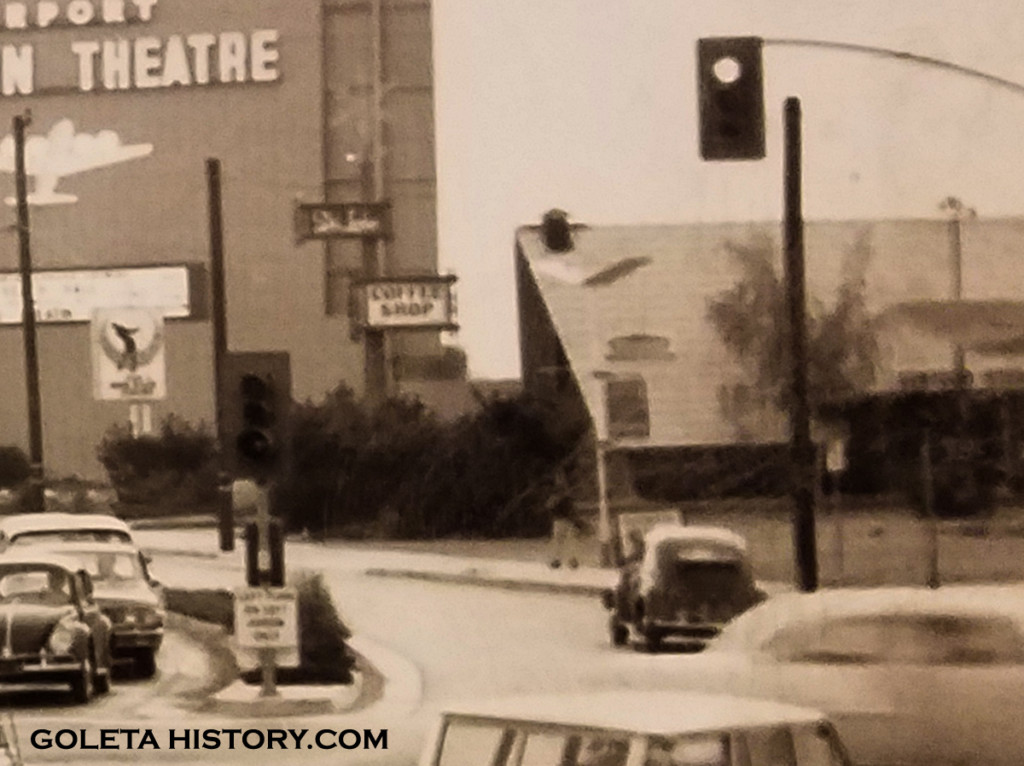 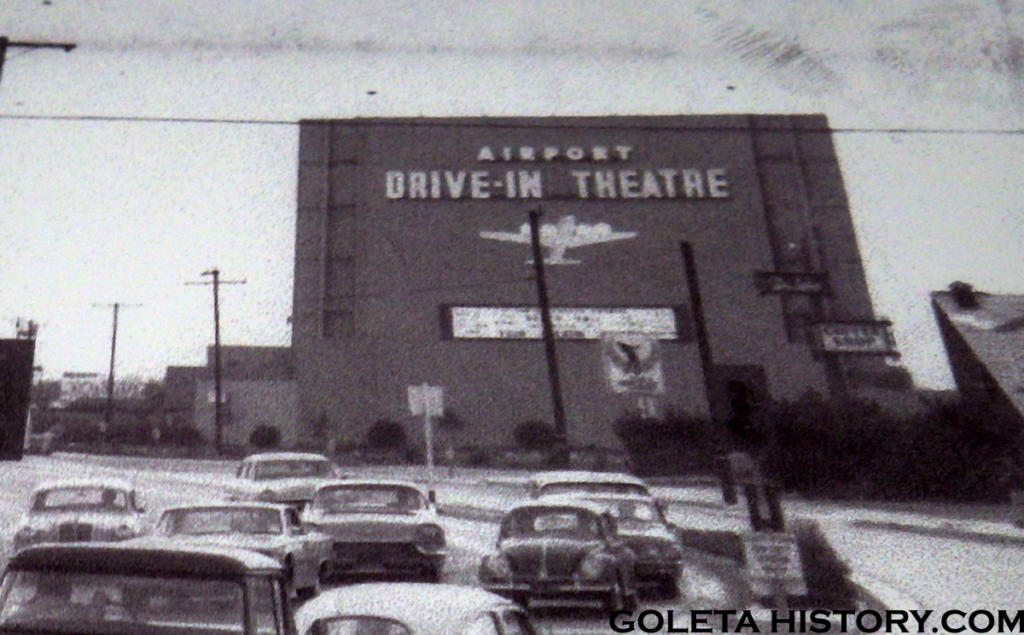 But this place, the Airport Drive In, was of utmost importance to Baby Boomers growing up in Goleta. It was where millions of happy memories were made. Photos of this place in its heyday are hard to come by, so when we heard Mike McLean had this picture hanging in his office at McLeans Auto Body, we had to go see it. 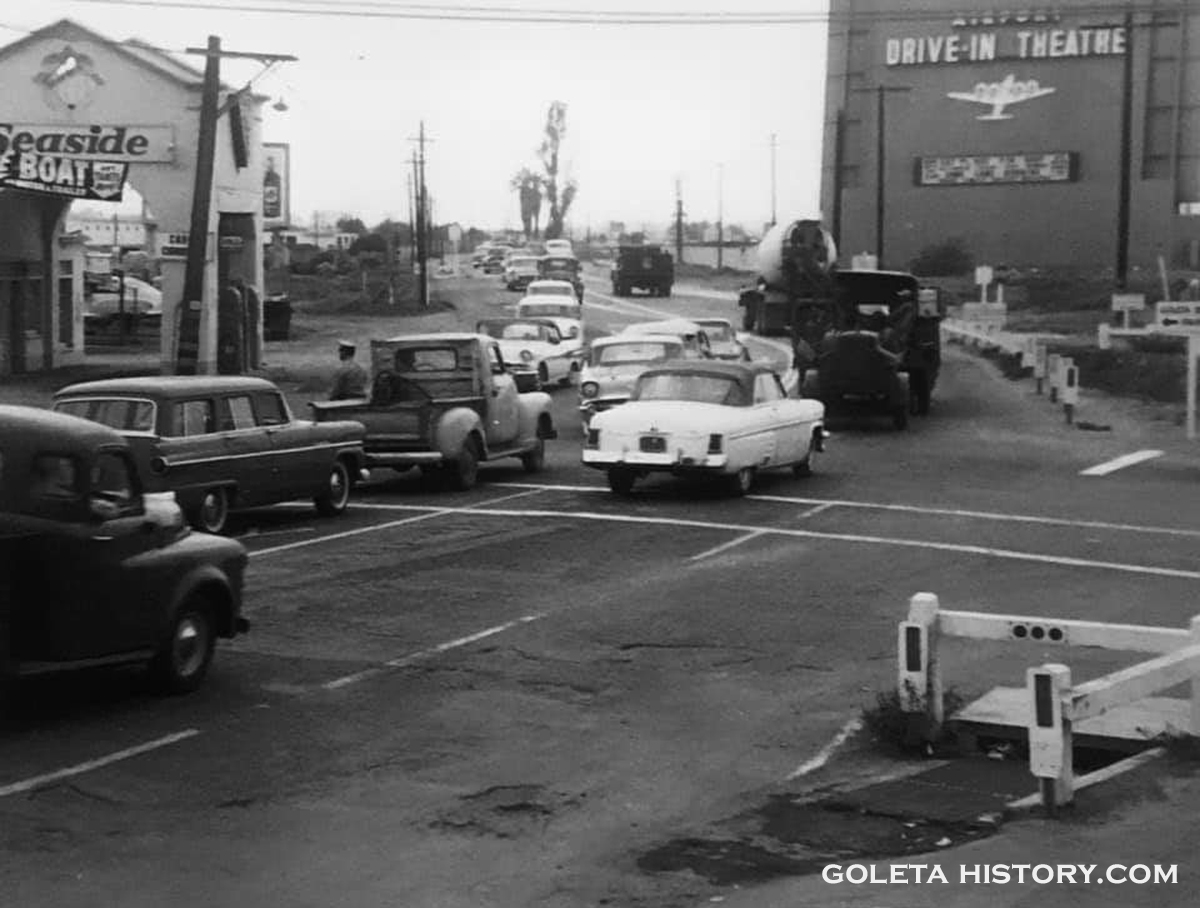 Recently we found this photo of the same corner in the mid 1950s, when the Drive-In was brand new. This sign at night was a sight to behold. The airplane was lit up and the propellers spun around, a neon masterpiece. 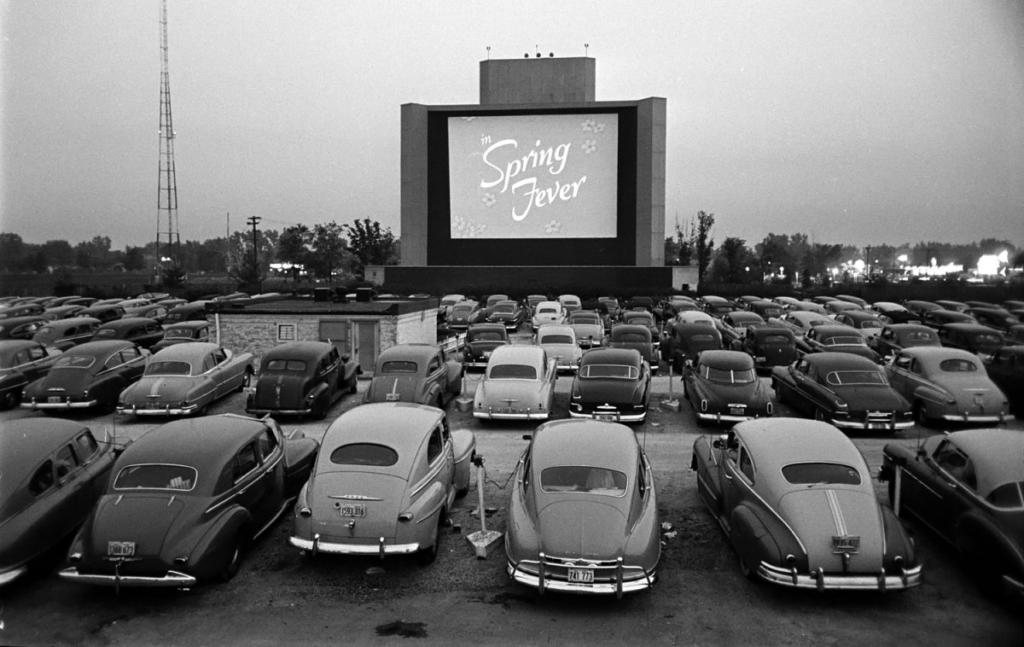 Today, drive-in theaters are a novelty and a place for swap meets, but from the 1950’s through the 1970’s, they were a family event and an adolescent escape. 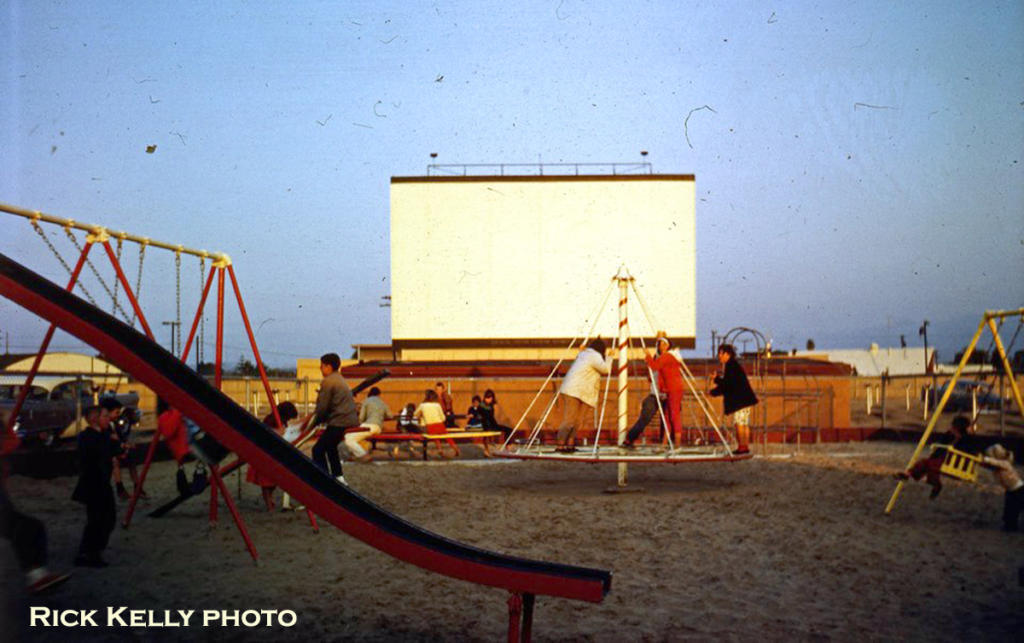 Great for young families, kids loved the playground and the chance to hang out with friends at night. Parents loved that they could put the kids in their pajamas and watch a movie in the comfort of their own vehicle, and it was affordable! 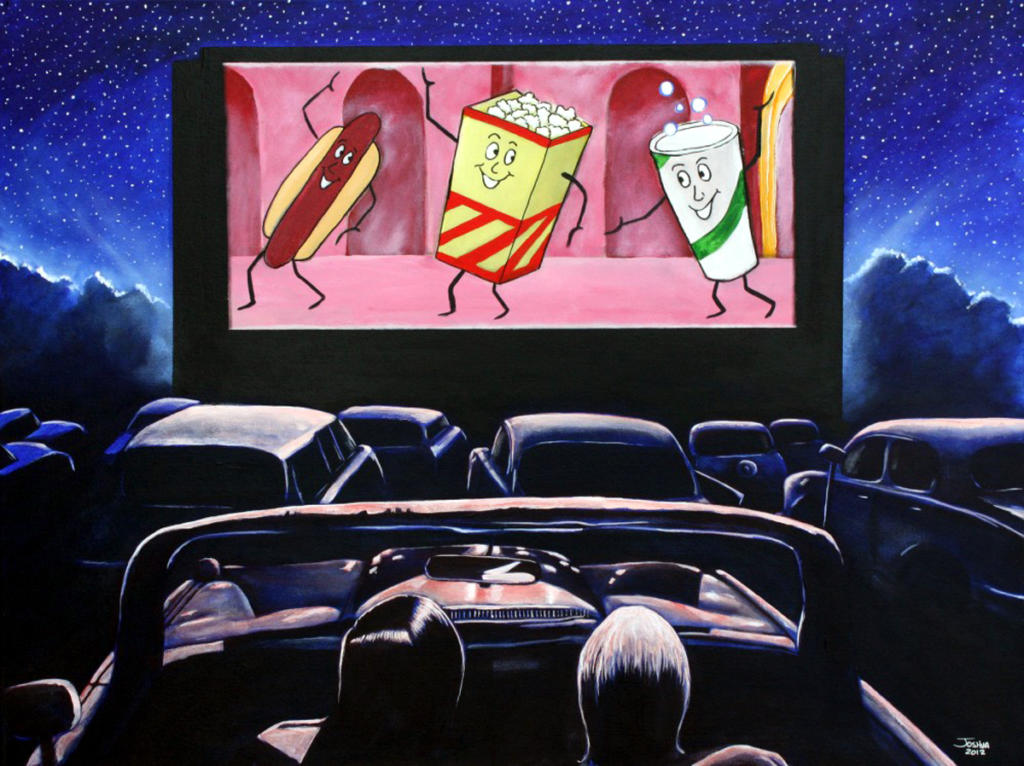 In between movies, a classic old cartoon prompted you to go to the snack bar to get some delicious treats. And hordes of kids in pajamas would swarm the playground again. 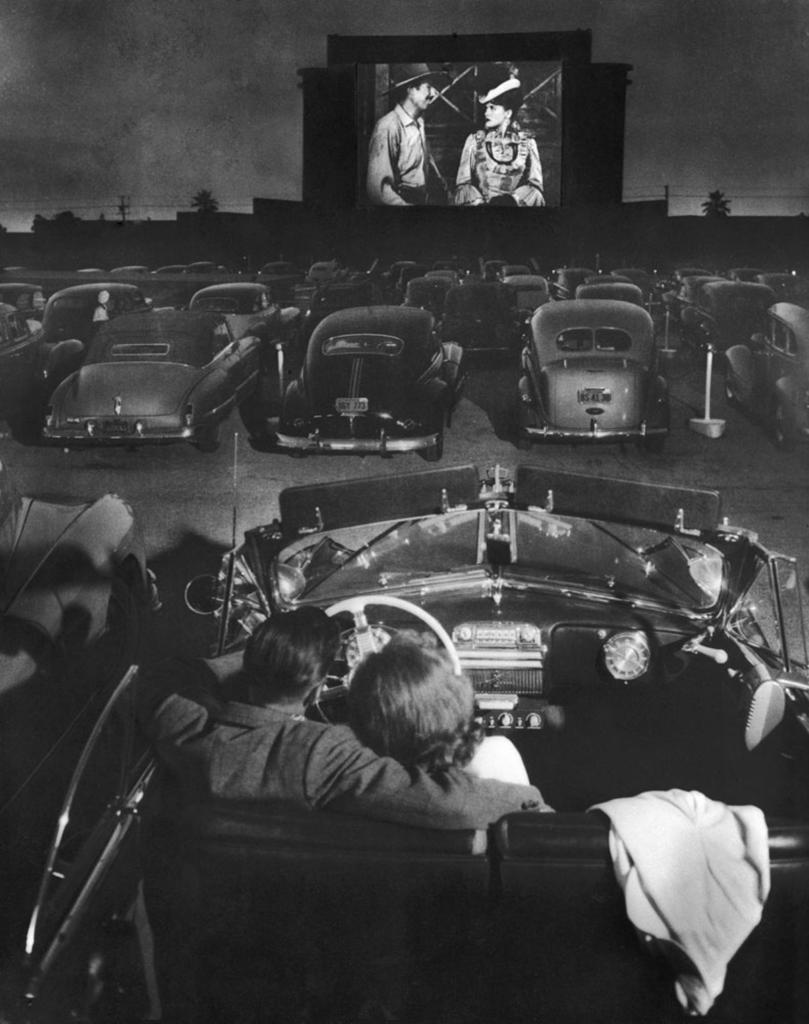 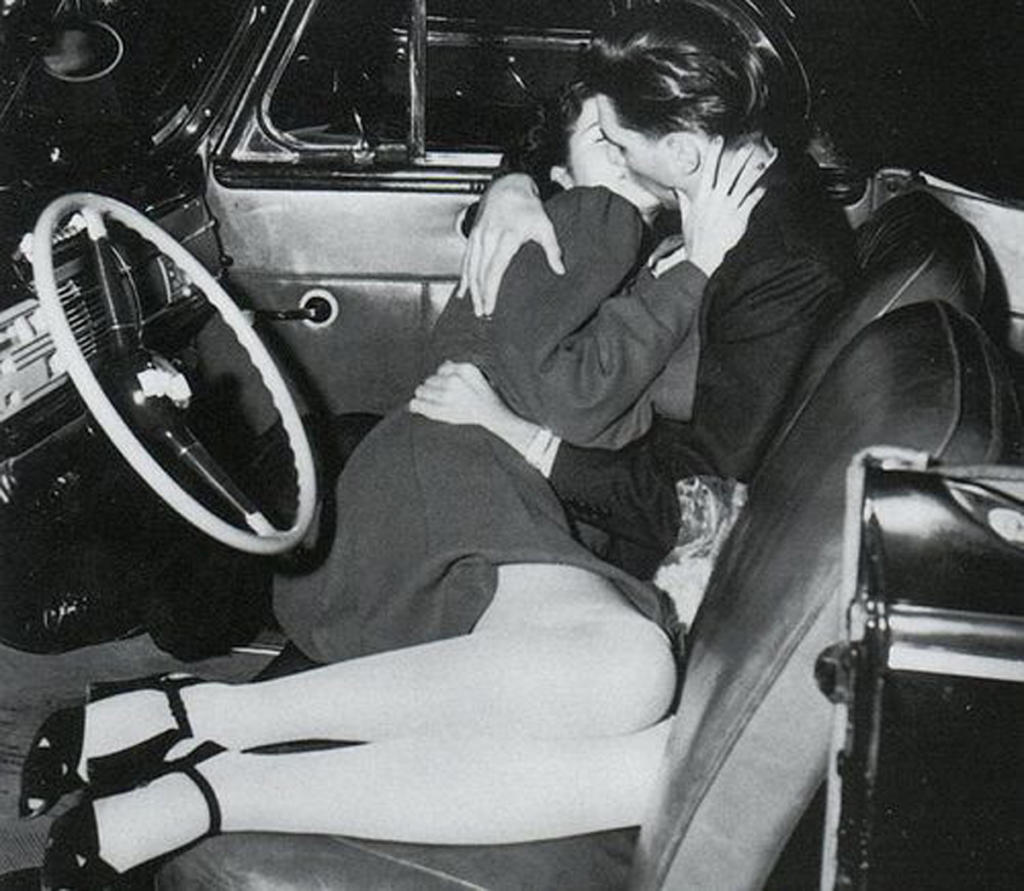 So much so, in fact, that they soon got labeled “passion pits” by some. 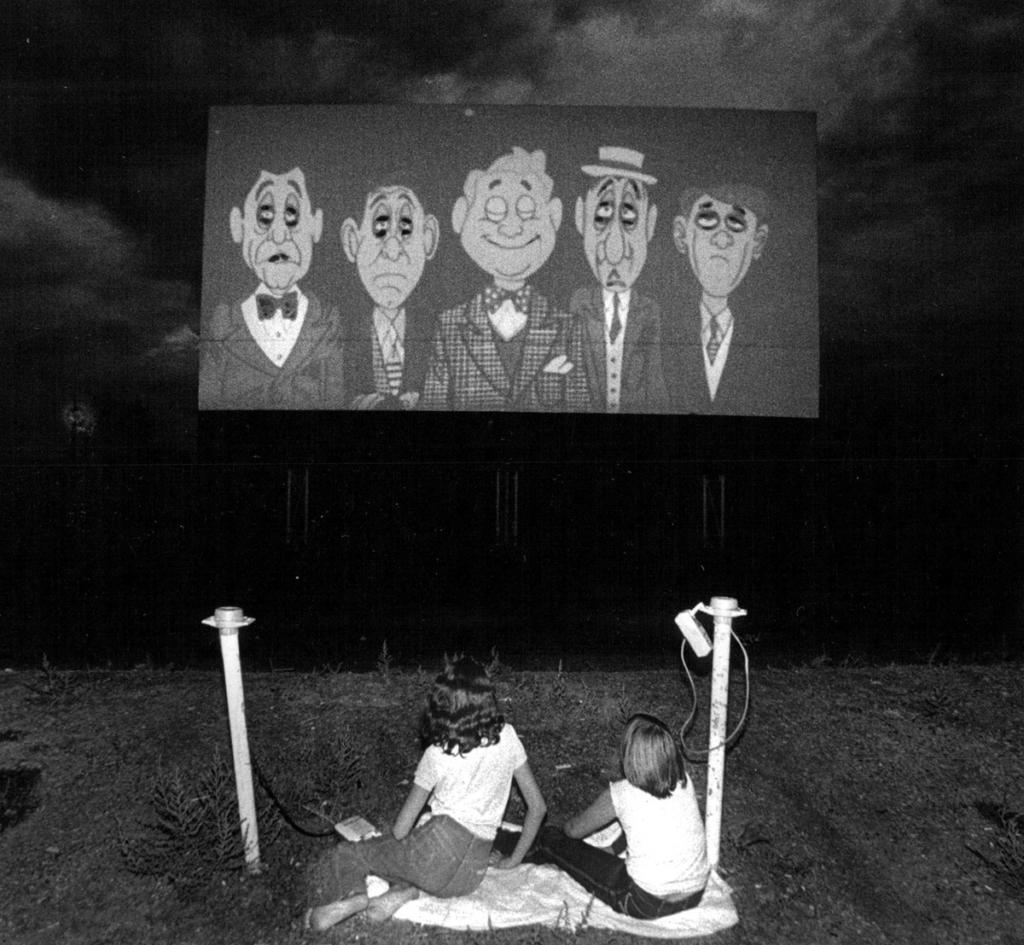 Drive-ins were not as profitable as regular theaters, however, because they could only show movies at night, and it was common practice to hide your friends in the trunk. In Goleta, some folks remember sneaking in through a hole in the fence with a date and a blanket and watching the movie lounging on the grass just below the screen. Talk about a cheap date! 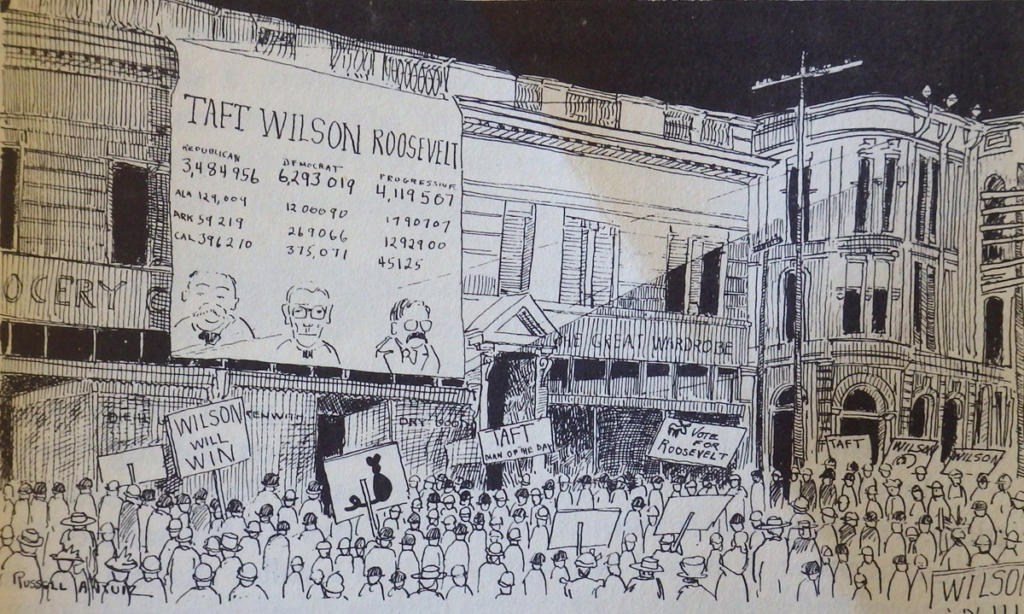 According to Walker Tompkins, the first “drive-in theater” in our area was on State Street in 1912. During the presidential election, a large white screen was hung on a building and election returns were projected from the roof of a building across the street. Between updates, movies were shown to keep the crowd entertained. Seeing how well this went, a local merchant began showing free movies nightly on a giant white board erected behind a building at State and Ortega. While admission was free, the entertainment was peppered with local advertisements.

Another outdoor theater, that charged admission, briefly operated on a hillside in Santa Barbara, but it was impossible to keep freeloaders from watching from further up the hill, so it soon closed. The only earlier outdoor movie known of in California was in Monterey in 1908. 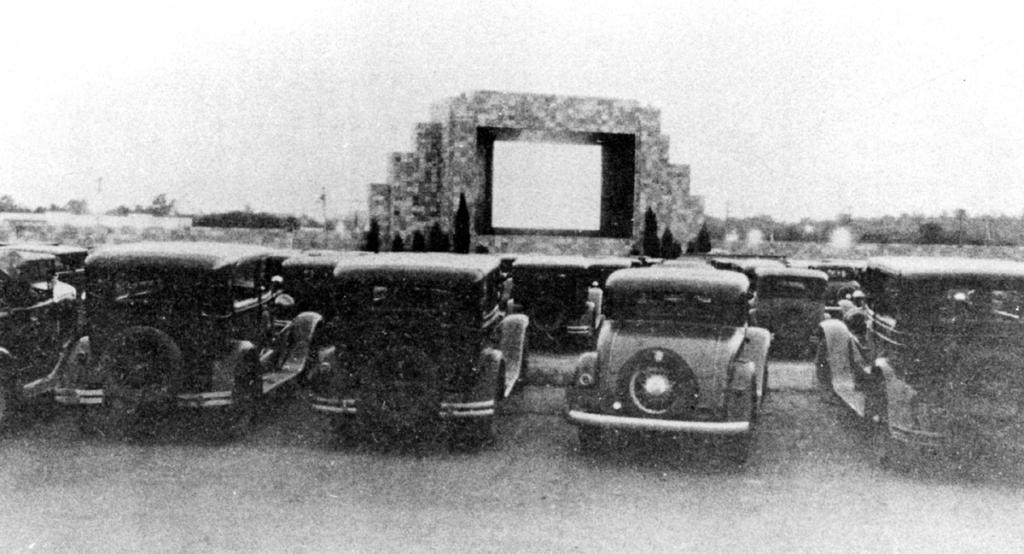 The first automobile drive-in theater opened in New Jersey in1933. Their slogan was “The whole family is welcome, regardless of how noisy the children are.” It was a financial failure, and the owner sold out, but the idea was good and the trend eventually caught on nationwide. 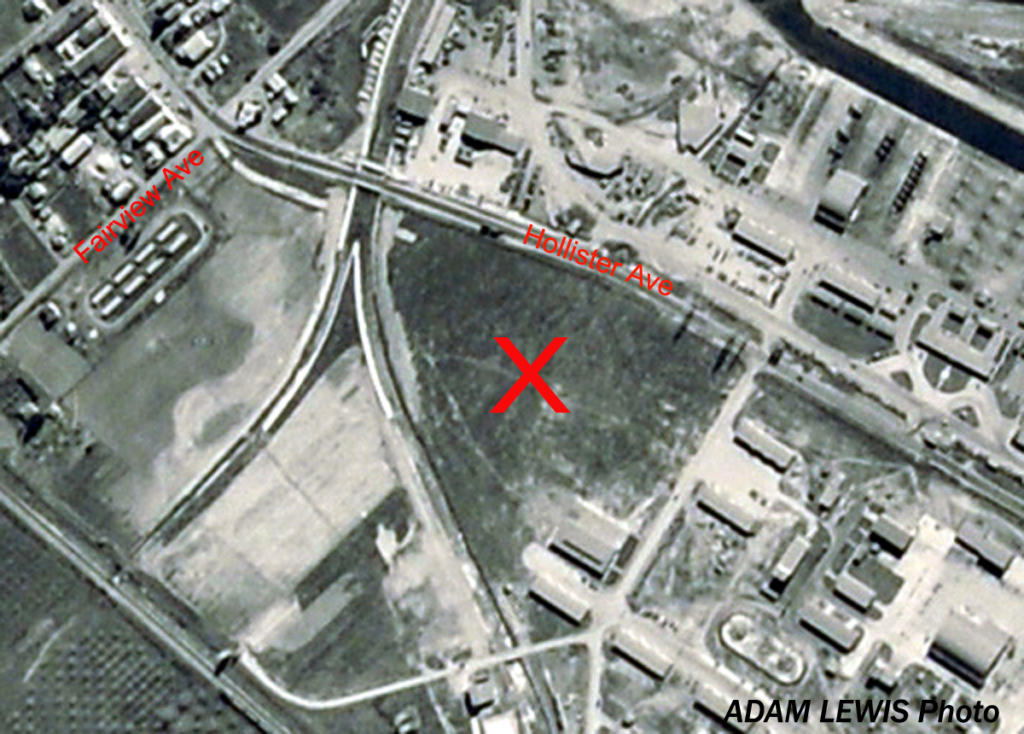 During World War II, this was how the lot looked that would soon be the Airport Drive-in. Surrounded by the Marine base, it was already the perfect shape! 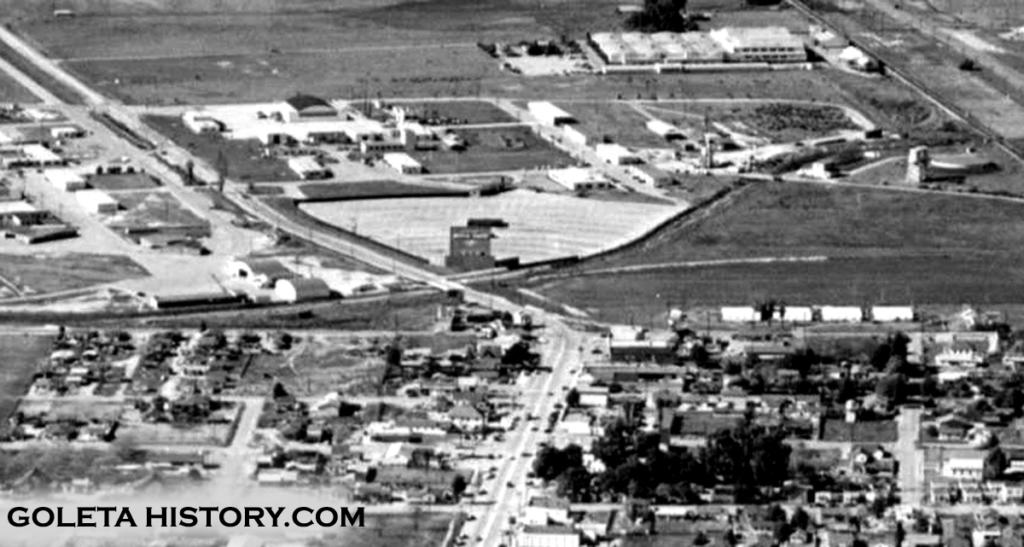 The Airport Drive-in opened in April 1951 with enough room for 700 cars, putting Goleta on the entertainment map for Santa Barbara County. Lots of folks remember parking on Hollister in the 1950’s, when the bushes were still small, and watching the show from the side of the road. It was so quiet you could hear the sound from the speakers. 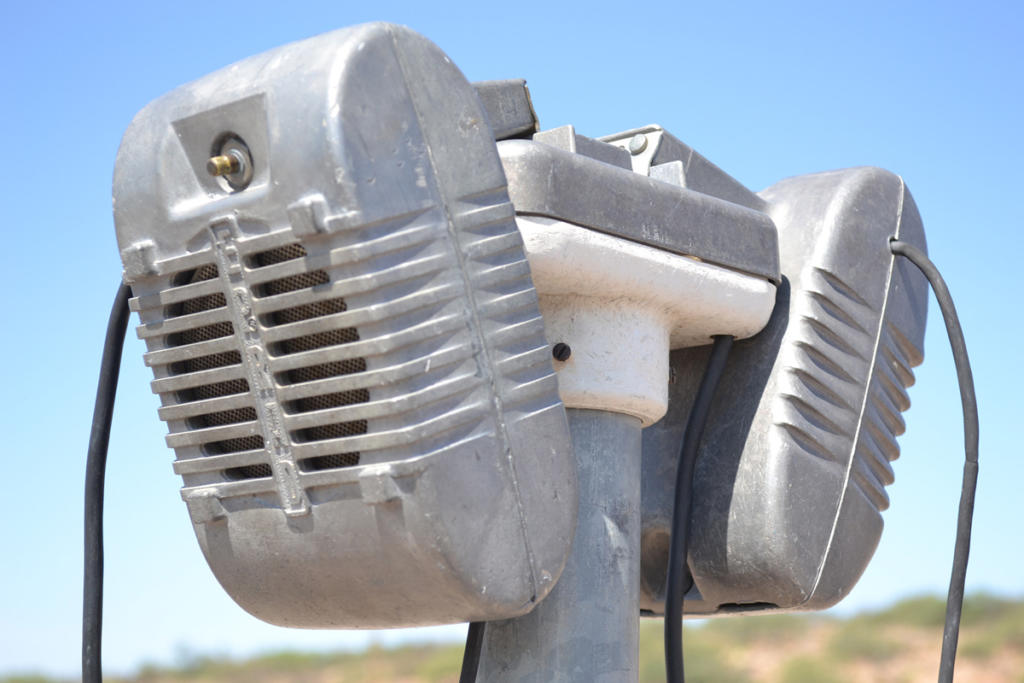 Modern Drive-in patrons probably have no idea what these are, but how many of us remember the poor sound quality these speakers delivered. And how many of us accidentally started to drive off before we removed them from our window…. 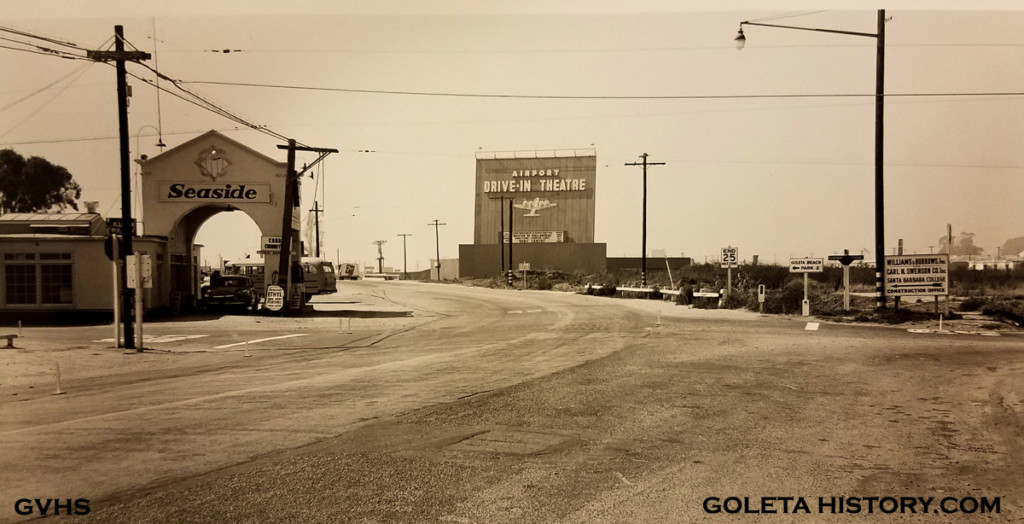 We recently found these quality photos from 1953. 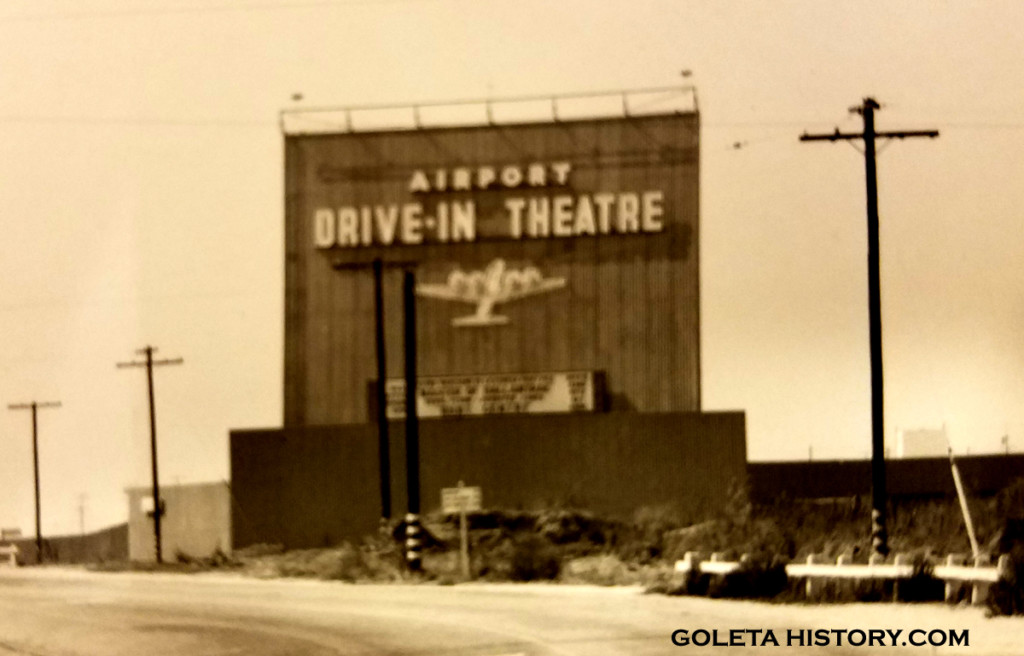 A good shot of the neon airplane. 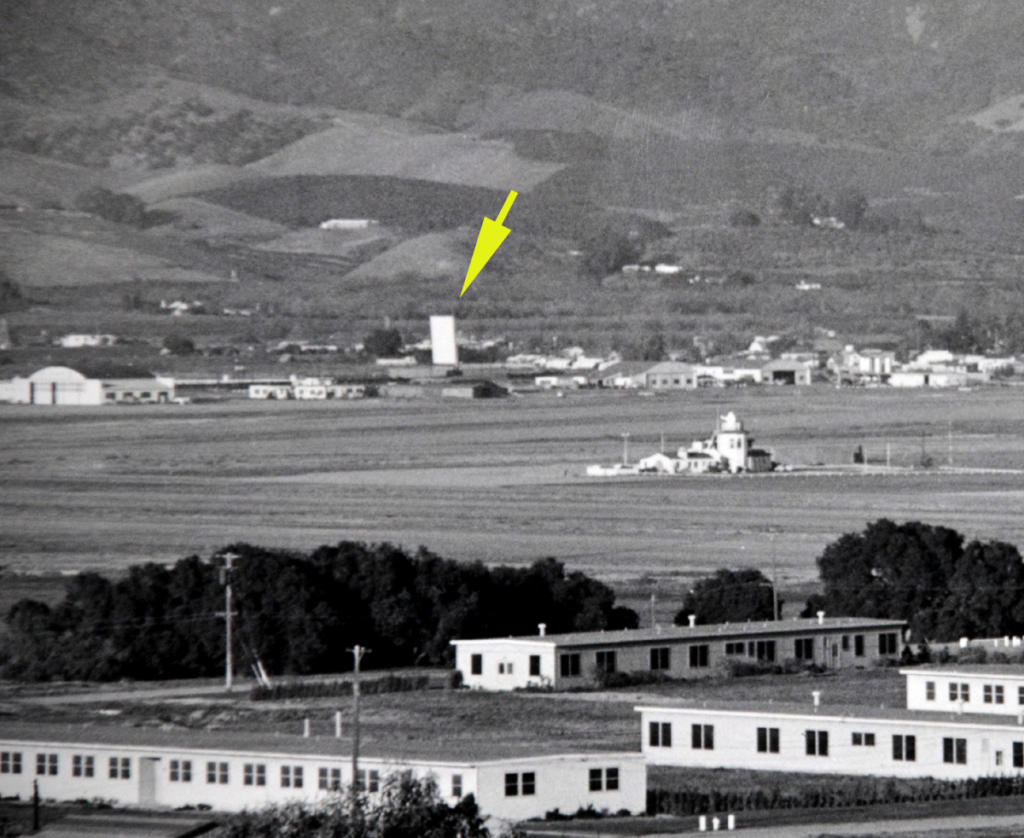 Here is a photo of the Airport Drive-in in 1959. The buildings in the foreground were Marine barracks, at this time being used by the newly formed UCSB. Also notice the Airport terminal and the original two hangars, mid photo on the right. 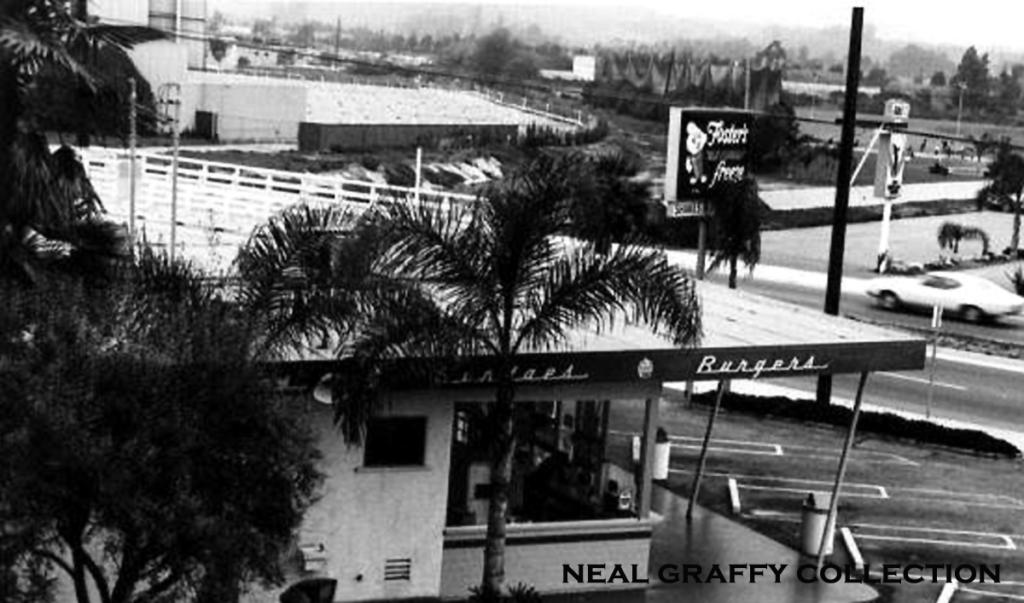 This great photo from the late 1960’s shows the Foster’s Freeze that was across the street, with part of Airport Drive-in visible in the upper left. The Swingers sign is also in view on the right. 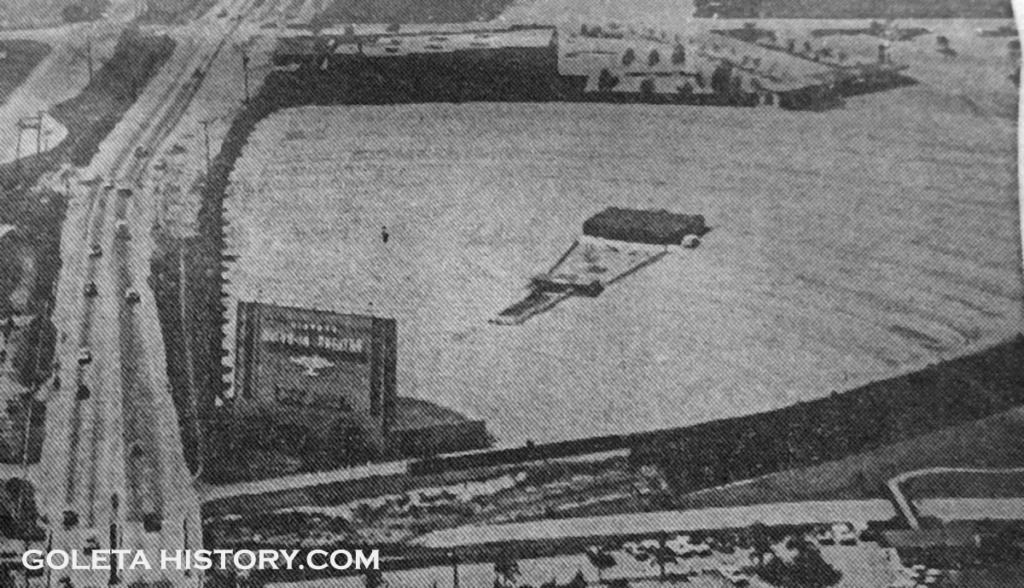 This photo is from 1968, the prime of the Drive-in’s career locally. By the 1970’s, the popularity was waning, and horror movies would stay for long runs. It seems like Friday the 13th and Dawn Of The Dead played there for months, and we all had them memorized. But it didn’t matter. We weren’t really there for the movie, it was a place to hang out at night with friends, many of whom were employed there! 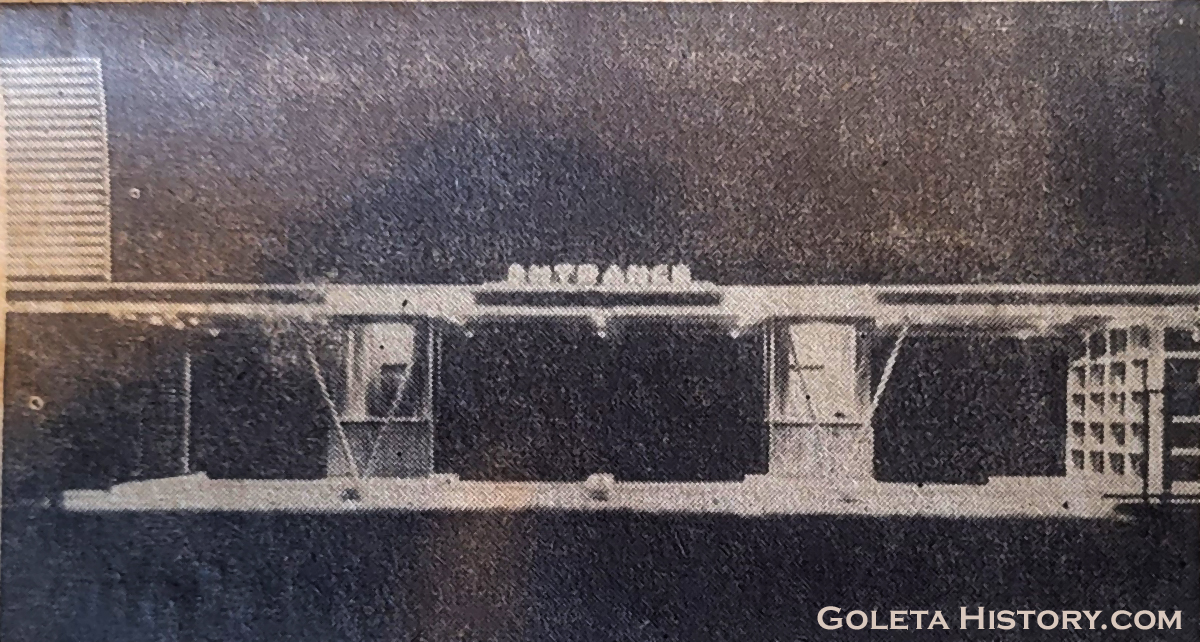 This was a very familiar sight to countless Goleta teens throughout the years. Most every weekend, the Airport Drive-In was the default place to meet. If there weren’t any parties to go to, the Drive-In was the place to be. Even when there were parties, we would often end up here afterwards.

As business continued to wane, they began offering a “$1.75 a Carload” night.  And as fewer customers came, the teenagers created more and more mischief, eventually requiring security guards to be hired. It became Party Central, reportedly, some guys would show up with a keg in the backseat of their car, and all their friends would meet them there. Creative pranksters would improvise the marquis once in a while. One local remembers driving by and seeing that “Three Days of the Condom” was showing… 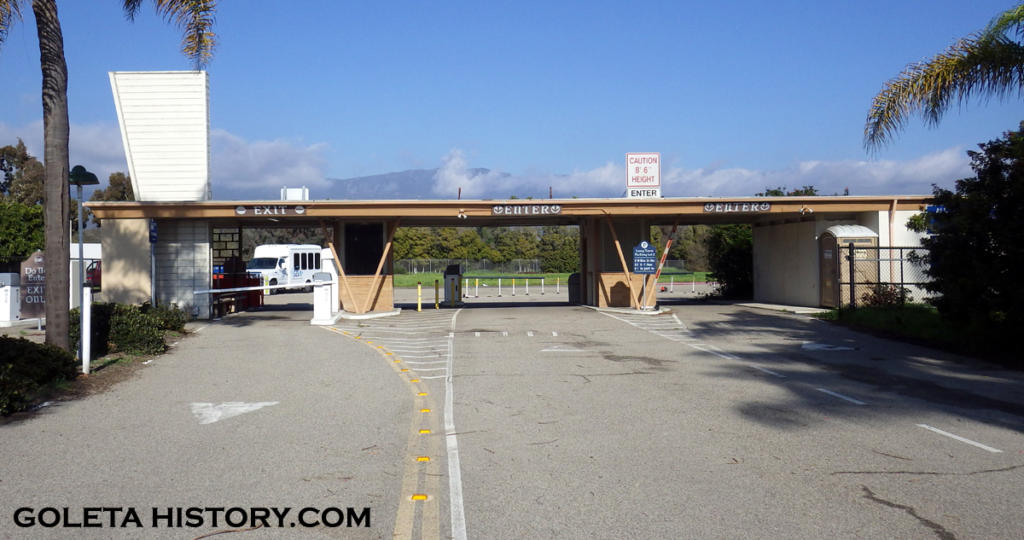 By the late 1990’s, the Airport Drive-in went out of business.

Today, the old drive-in serves as a parking lot for the Santa Barbara airport. 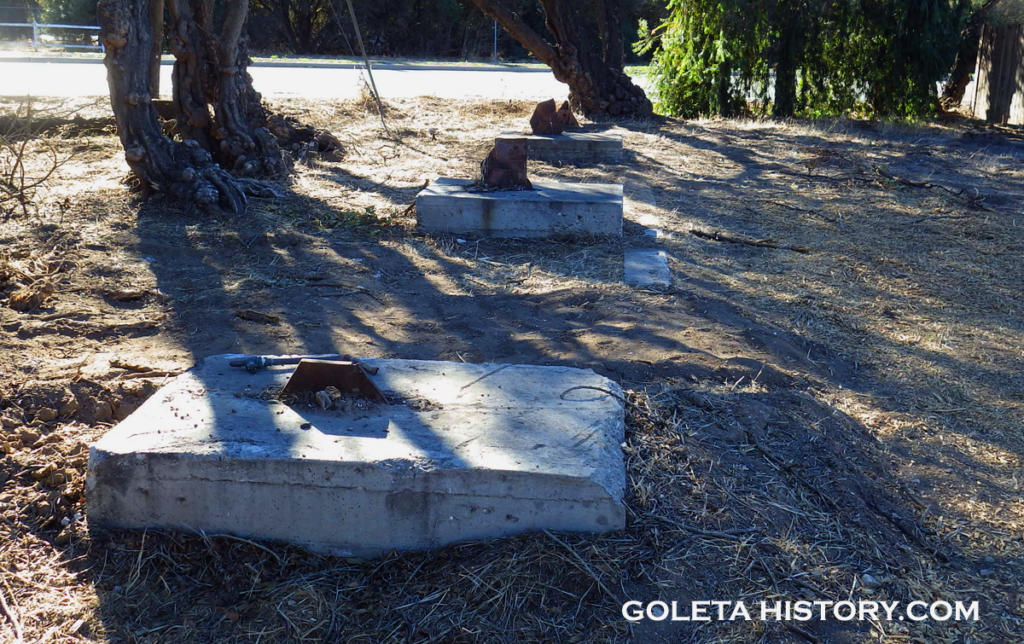 All that’s left of the screen with the big neon airplane are these concrete slabs. 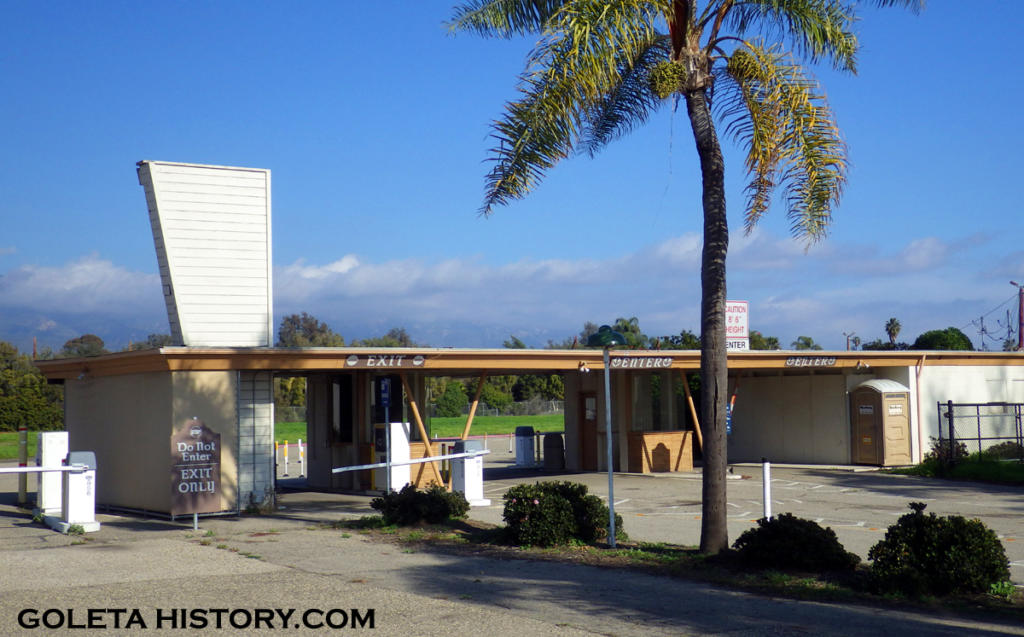 But the entry gate and office still stand with its vintage 1950’s architecture on full display. 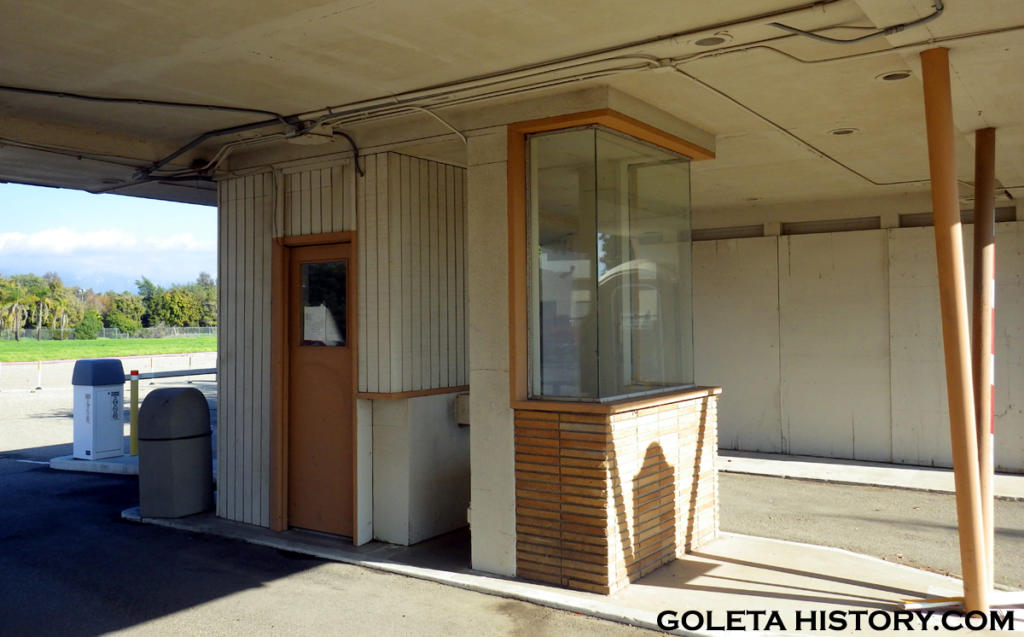 The ticket booths remain in perfect condition, standing guard over so many memories… 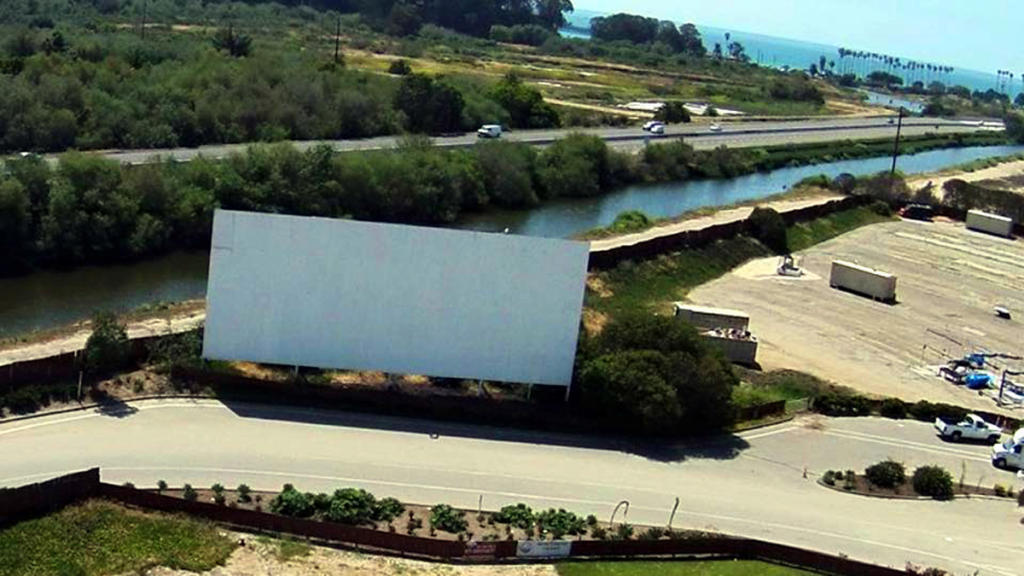 You can, however, still go to a drive-in movie in Goleta . Formerly known as the Twin Screens Drive-in, the Santa Barbara Drive-in is still open on South Kellogg Avenue. It’s still as much fun as ever, and a great experience for kids too young to remember the old days. 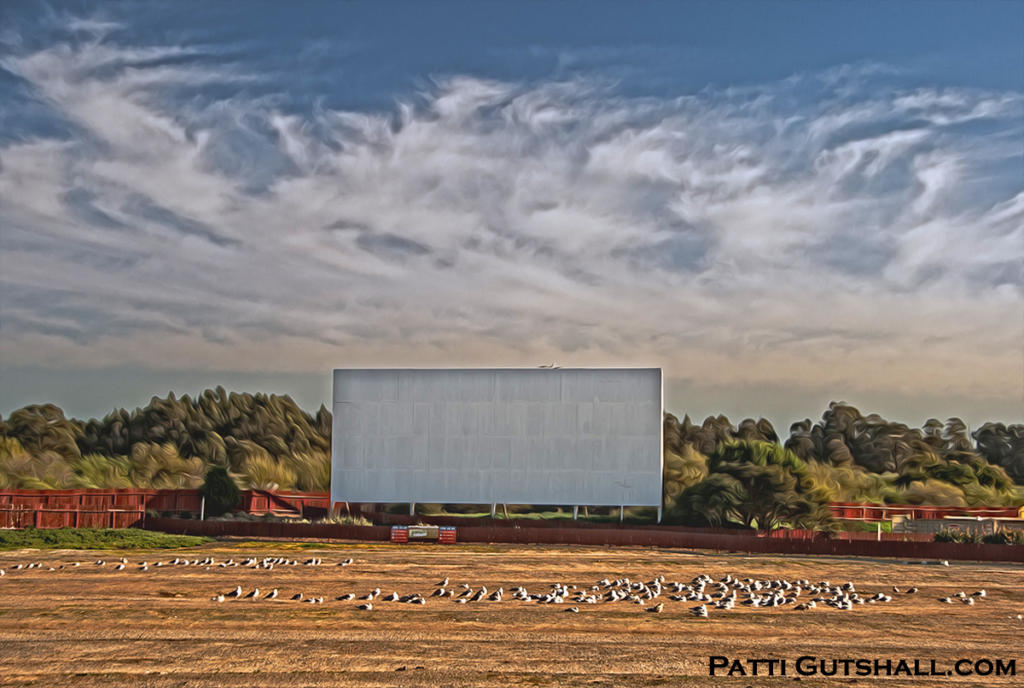 But for us old timers, nothing can compare to the good old days at the Airport Drive-in.