Most folks know there’s a stretch of the Gaviota Coast that’s referred to as Naples. But do they know how it got this name?

It was first called Naples all the way back in 1887, by a wealthy world traveler named John H. Williams and his wife Alice. They had a dream to build a world class hotel called the Crescent Beach Hotel and a planned community called Naples-by-the Sea, and make a pile of money. 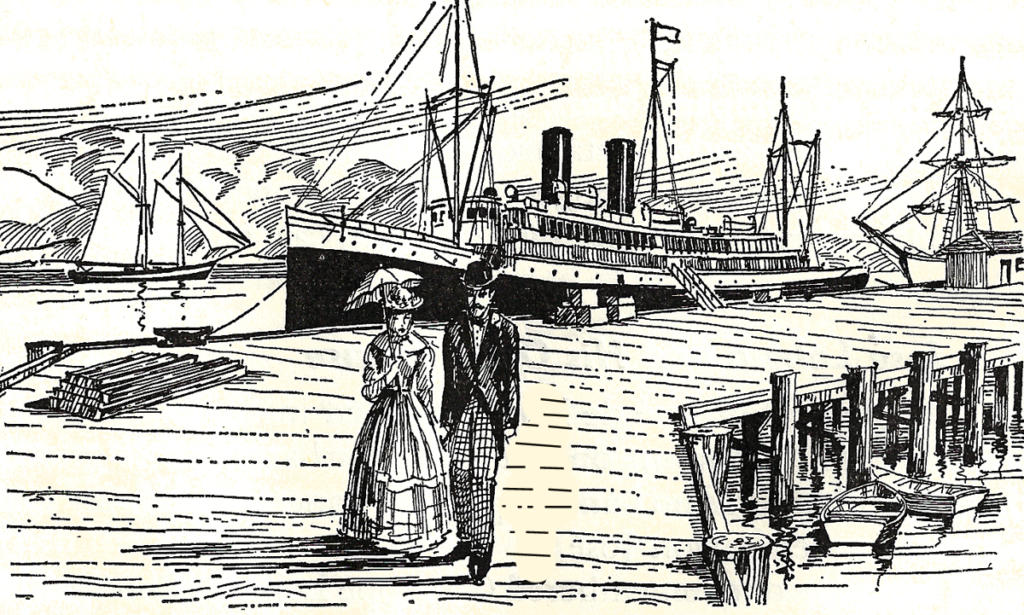 The Williams liked to spend their summers in Italy and their winters in California. They would frequently travel to San Francisco by steamship for business, and as they passed the Dos Pueblos Ranch, they would always comment on the similarity in appearance to Naples, Italy. 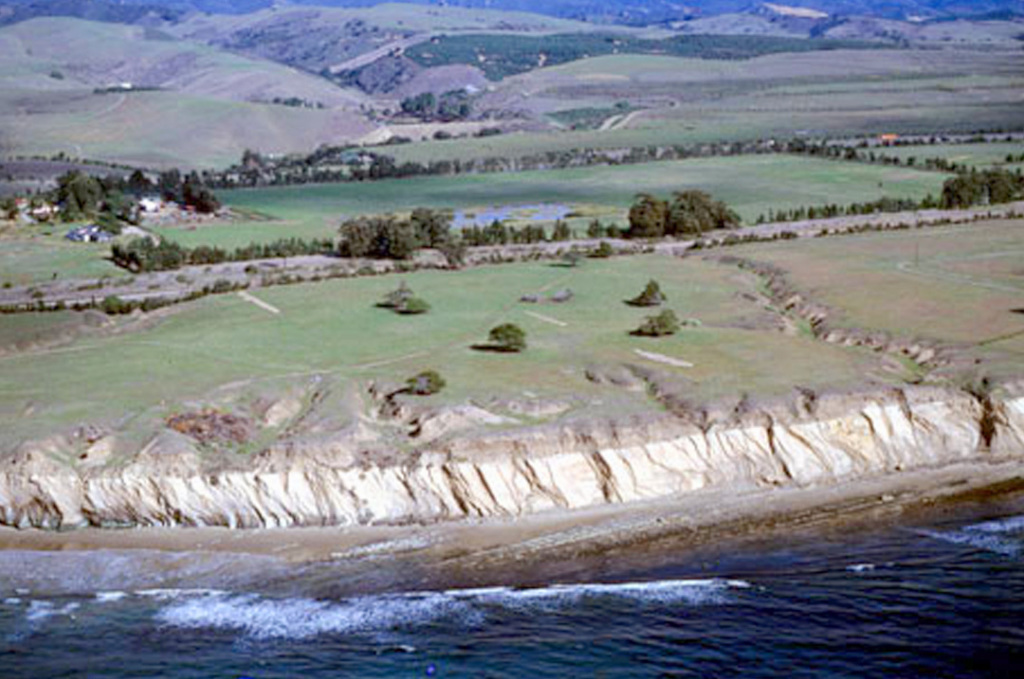 At this time California was in the midst of a real estate boom, sparked by the completion of a San Francisco to Los Angeles railroad line. Investors were buying and flipping land all through Southern California. The promise of a Coastal route railroad line connecting L.A. to San Francisco via Santa Barbara brought the frenzy to Goleta. The Williams’ got caught up in the excitement, and decided to make their real estate dream a reality.

On June 2nd, 1887, John Williams bought 900 acres of prime ocean front real estate from the widower of Rosa Den for $50,000. Thus began the “Naples Improvement Company”, and Williams took four partners, all executives with the Southern Pacific Railroad. They guaranteed him the completion of the Coast line route was near, and that was crucial to the success of his project.

Immediately, a nation wide advertising campaign was launched, extolling the virtues of the climate and describing the town and hotel as if they already existed. They described boating on Naples Bay and showed pictures of a lavish hotel. They also showed a picture of the “Dos Pueblos River” with an ocean liner docked in the magnificent harbor. In reality, the “foaming cascades” of the upper Dos Pueblos River were usually just a trickle and the “harbor” was a duck pond, a few feet deep. 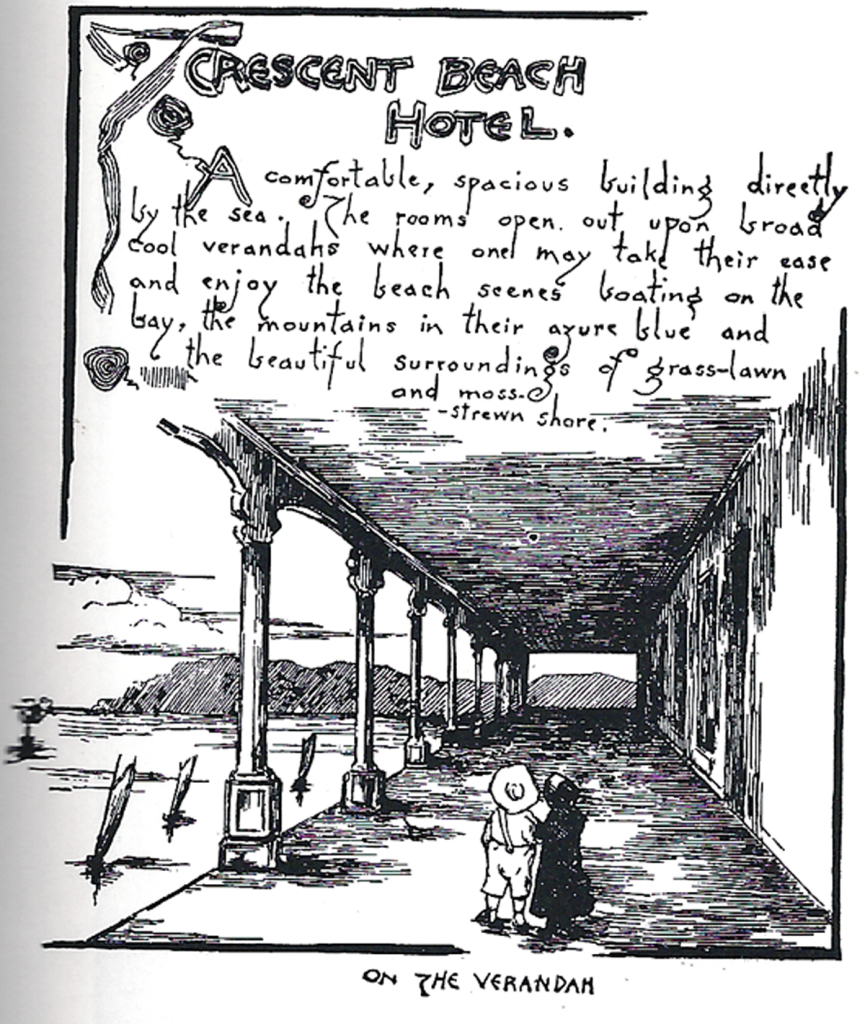 While the hype machine cranked out all these stories of a perfect wonderland, the Williams were still eagerly depending upon the completion of the Coastal railroad line. A necessity to bring construction supplies, and a major selling point, the railroad station.

Williams dumped thousands of dollars into his advertising campaign, but the returns were minimal. Without the rail customers, he turned his attention back to the sea-going public with a desperate marketing effort. Huge wooden letters, twenty feet high, were erected on the bluffs, spelling out NAPLES. The white washed letters were visible ten miles out to sea. They eventually blew down, one by one, in the wind storms of 1890, symbolic of things to come for John Williams’ dream. 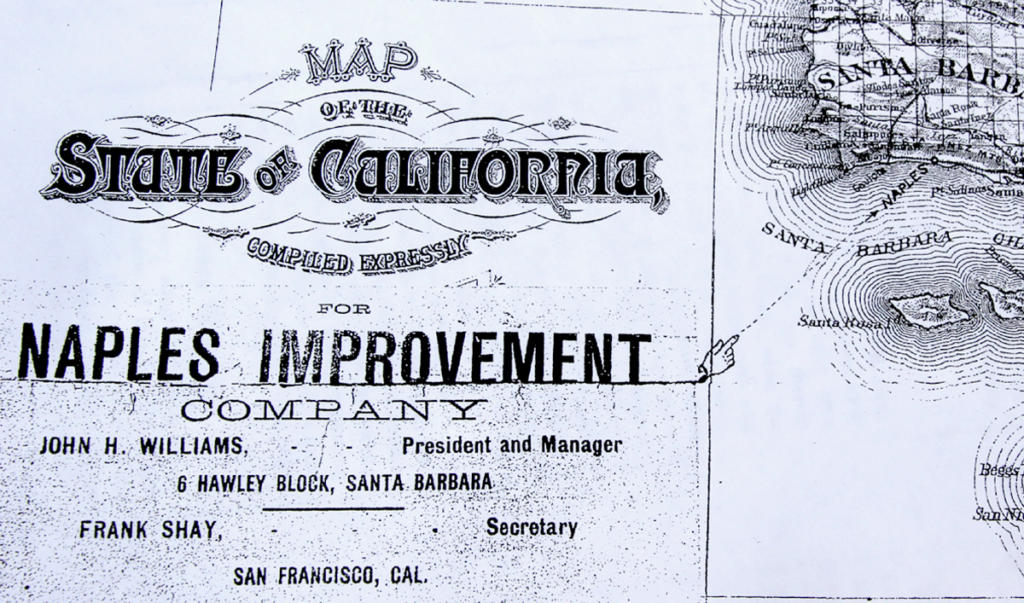 Maps were distributed, proclaiming the development as a “Poetic Realm”, “Ordained by Nature”, and the “Queen of Summer and Winter Resorts”. The advertisements called it the Bay of Naples, which is a stretch, to say the least.

If nothing else, the city was laid out on paper, featuring scenic avenues and parks, and detailing utility easements and landscaping. Streets running east and west were numbered 1 through 18, starting at the ocean. Running north to south, the avenues featured “Neapolitan” names, such as Vesuvius, Aetna, and Capri.

The only two roads that actually existed were named after celebrities of the day. 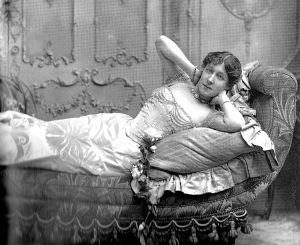 There was Patti, named for a Spanish soprano, and Langtry, named after theatrical sex queen, Lily Langtry, pictured here.

But there were complications. The economy took a downturn, and funds for the Coastal rail were diverted elsewhere, bringing the progress to a grinding halt. The railroad got as close as Ellwood, where a roundabout was built, and that was where the line ended for fourteen years. This spelled disaster for John Williams’ plan. By the time the railroad got to Naples, the land boom was over. 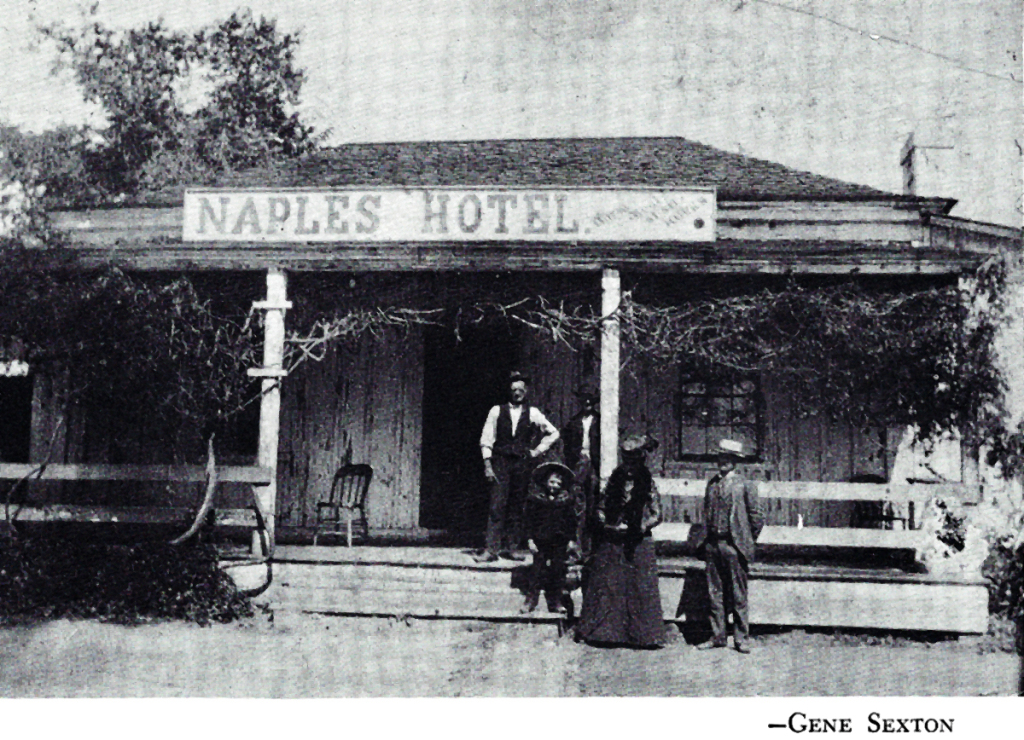 John Williams on the far right stands next to his wife Alice in front of the Naples Hotel. This was not the hotel of his dreams, by any means. In fact, he passed away before the railroad ever rolled onto his property. But he did manage to build a small town at Naples using lumber he acquired from a schooner that anchored off the mouth of Dos Pueblos canyon and floated supplies ashore. 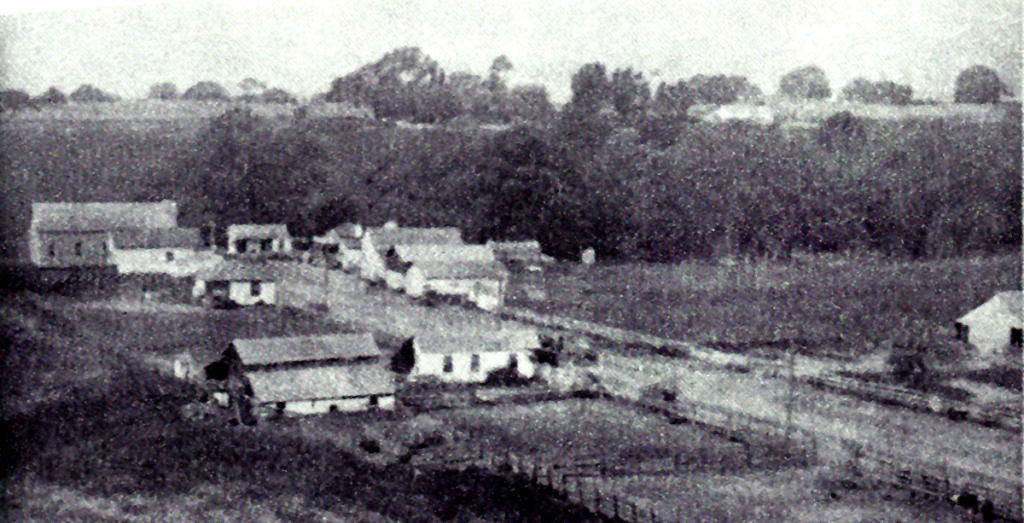 Williams’ plan was to create a farming community to provide fresh produce and supplies for the future 5,000 residents of his dream city. He even created the Dos Pueblos Water Company, building a dam upstream and water mains down to the town site. 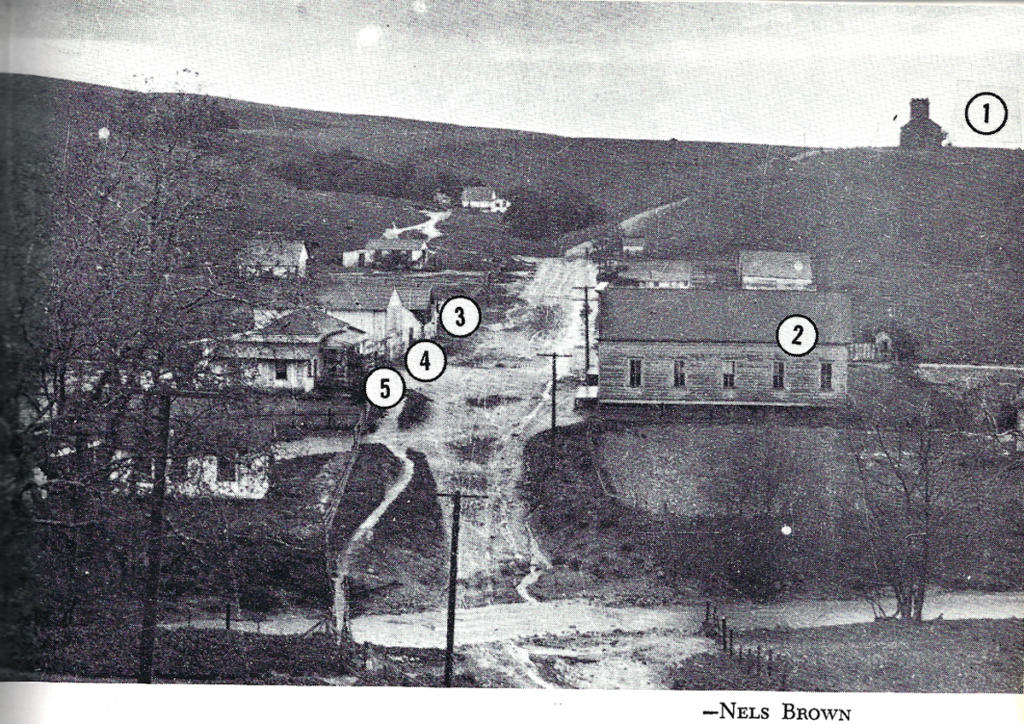 Looking back towards Goleta, this was the town of Naples during a rainstorm in 1900. 1: the Haunted Chapel – 2: Naples Dance hall – 3: Blacksmith shop – 4: Wells Fargo barn – 5: Naples Hotel.

Despite the failure of the grand plan, the little town of Naples began to look like a small community. The Naples Dance Hall became a popular social spot for the youth of Goleta and Santa Barbara. Couples would rent carriages for the long moonlit trips up the coast to attend a Naples dance. Sounds like fun even today!

On December 15th, 1895, John Williams passed away, leaving his dream to his wife, Alice. She was every bit as determined to see Naples By The Sea materialize. She decided to build a Gothic church on the east rim of the Dos Pueblos Canyon, where future residents could worship. 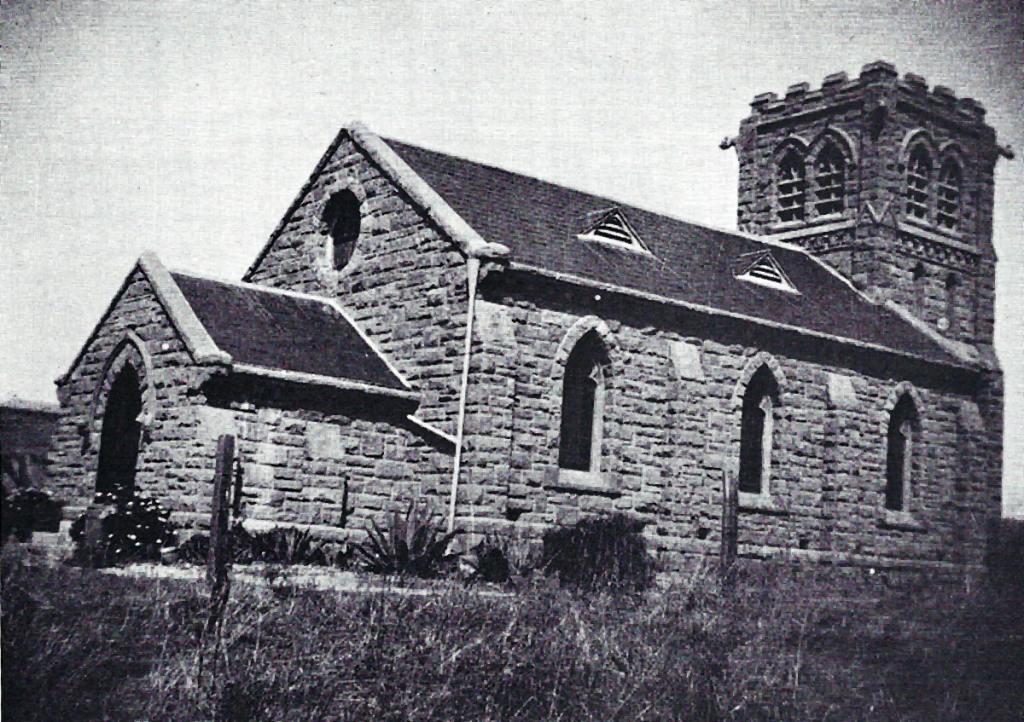 She spared no expense in the construction, hiring a prominent architect and importing stain glass windows and slate shingles from Tuscany. Gargoyles with panther heads graced the corners of the structure and cactus and century plants made up the landscaping. The remains of John Williams were returned from an undertaker’s in San Francisco and sealed in one of the tombs built in the mausoleum. Also entombed there, to the dismay of the community, were the embalmed carcasses of two of her precious pug dogs. Sculptured likenesses of the dogs heads were also carved into the exterior of the church. It was her desire to have a wedding held at the church, but no one accepted her kind offer.

Locals declared it a spooky place from the day it was built, and some took to calling it a “dog cemetery”.

For twenty seven years it sat empty, the most prominent man made landmark between Santa Barbara and Gaviota, and never once used for a religious service. Beside the locked doors read an inscription dedicating the church to the memory of John Williams, the founder of Naples.

Kids dubbed it the Haunted Chapel and bats made their home in it’s looming bell tower. In Walker Tompkins’ words, it was a monument to “the dead dreams of John H. Williams and his City by the Sea”. 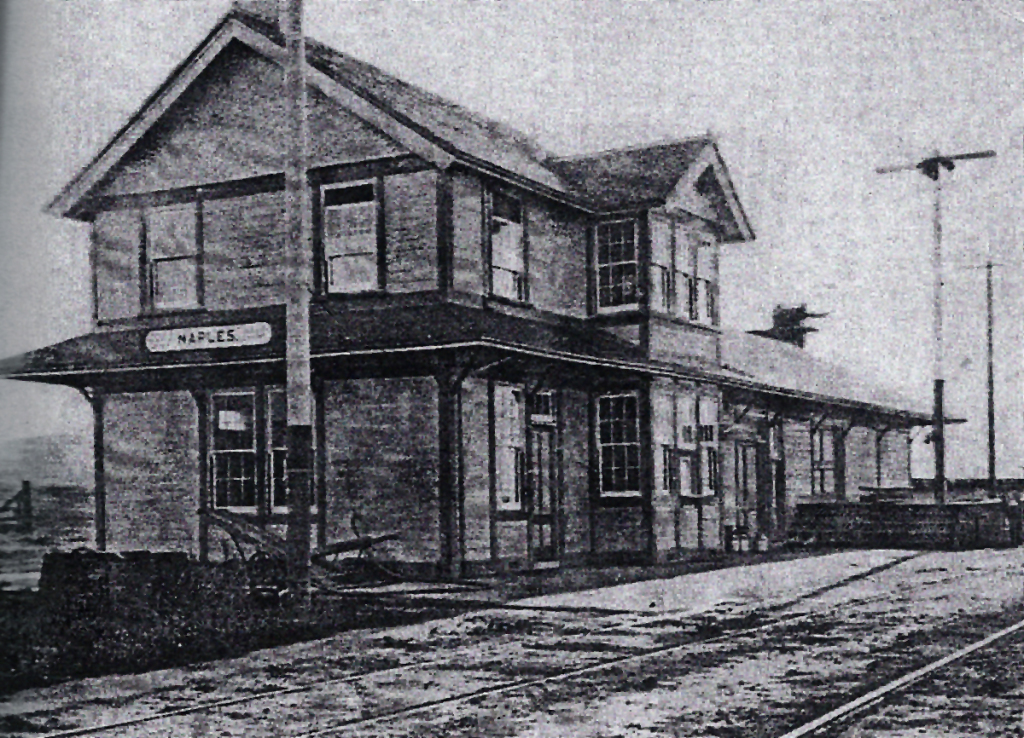 Alice Williams never did give up on her husband’s dream. She did, however, become known as an eccentric, a penny pincher and a recluse.

On March 31st, 1901, she stood on the platform of the brand new Naples train station, her arms full of roses. When the first ever train pulled in from Los Angeles, she “ceremoniously garlanded the cowcatcher with flowers”. Three days later, when the first train came in from San Francisco, Mrs. Williams flagged it down. J.J. Hollister told Walker Tompkins what happened next. “She told the engineer it had been her husband’s fondest desire to ride the first train into Santa Barbara from Naples. Then a group of pallbearers lifted the coffin of John Williams into the train’s baggage car and, along with Alice, he made the trip to Santa Barbara and back. Upon their return, he was placed back in his vault in the Naples chapel. Even in death, John Williams hadn’t been cheated out of his fondest desire.”

So while Alice Williams had lived to see the completion of the railroad through Naples, the land boom was over, the exquisite Potter Hotel had been built in Santa Barbara, attracting all the rich and famous Naples was intended for, and many of them were building multi million dollar mansions in Montecito. Meanwhile, Naples itself was in decline. 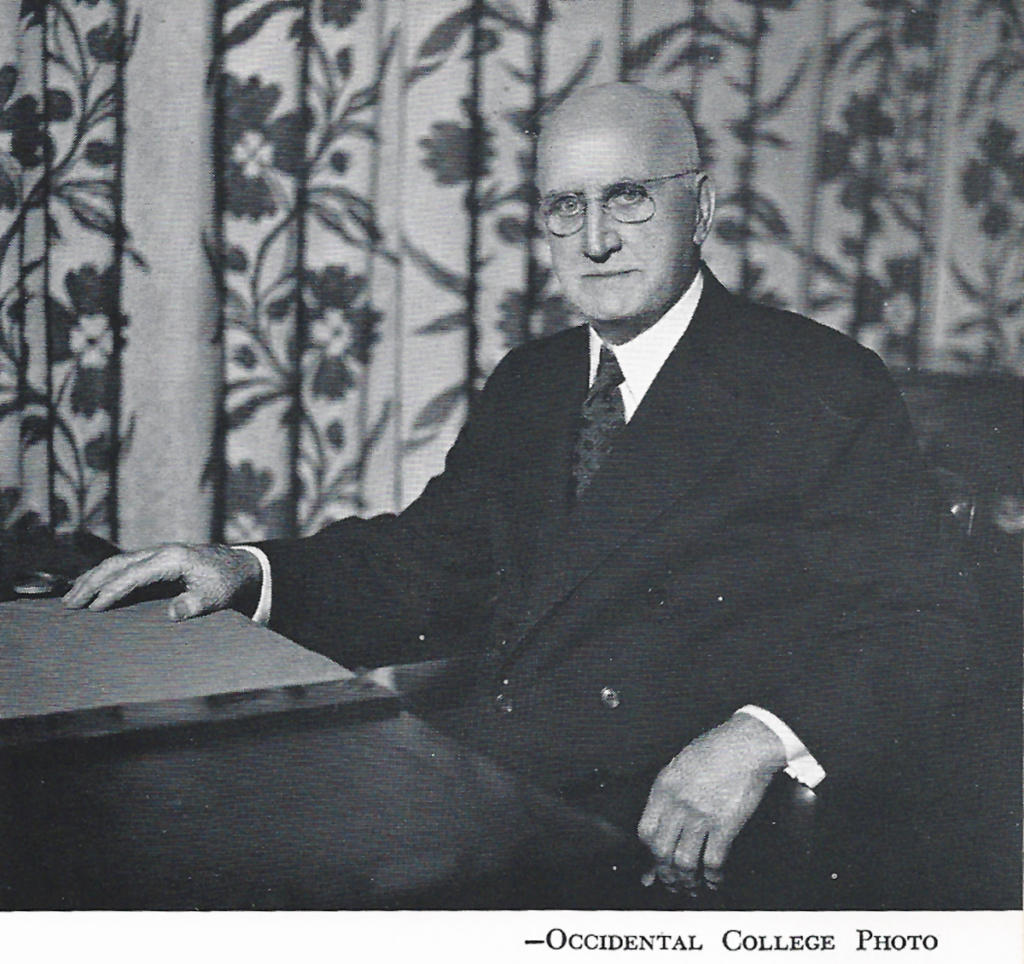 Eventually, Naples was bought out by retired oil man H.G. Wylie, and his spokesman announced that henceforth the name “Naples” would be abolished and it would be referred to in it’s proper name, Dos Pueblos Ranch. Immediately, the old clapboard town of Naples was demolished and the ranch was enclosed by a barbed wire fence with prominent NO TRESPASSING signs on display. Where the town was, Wylie planted walnut trees. 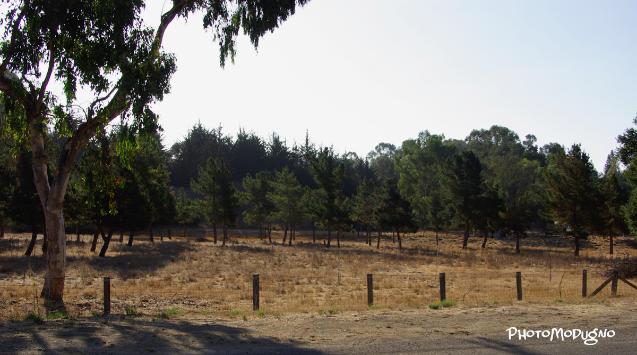 This is how the town site looks today, with the remains of an old Christmas tree farm.

The powerful Santa Barbara earthquake of 1925 damaged Alice Williams church, and Wylie, quickly dismantled what was left of the spooky old structure.

Some of the stone blocks from the haunted chapel were used as walls and a gate for the big house at Dos Pueblos Ranch where they can still be seen today. 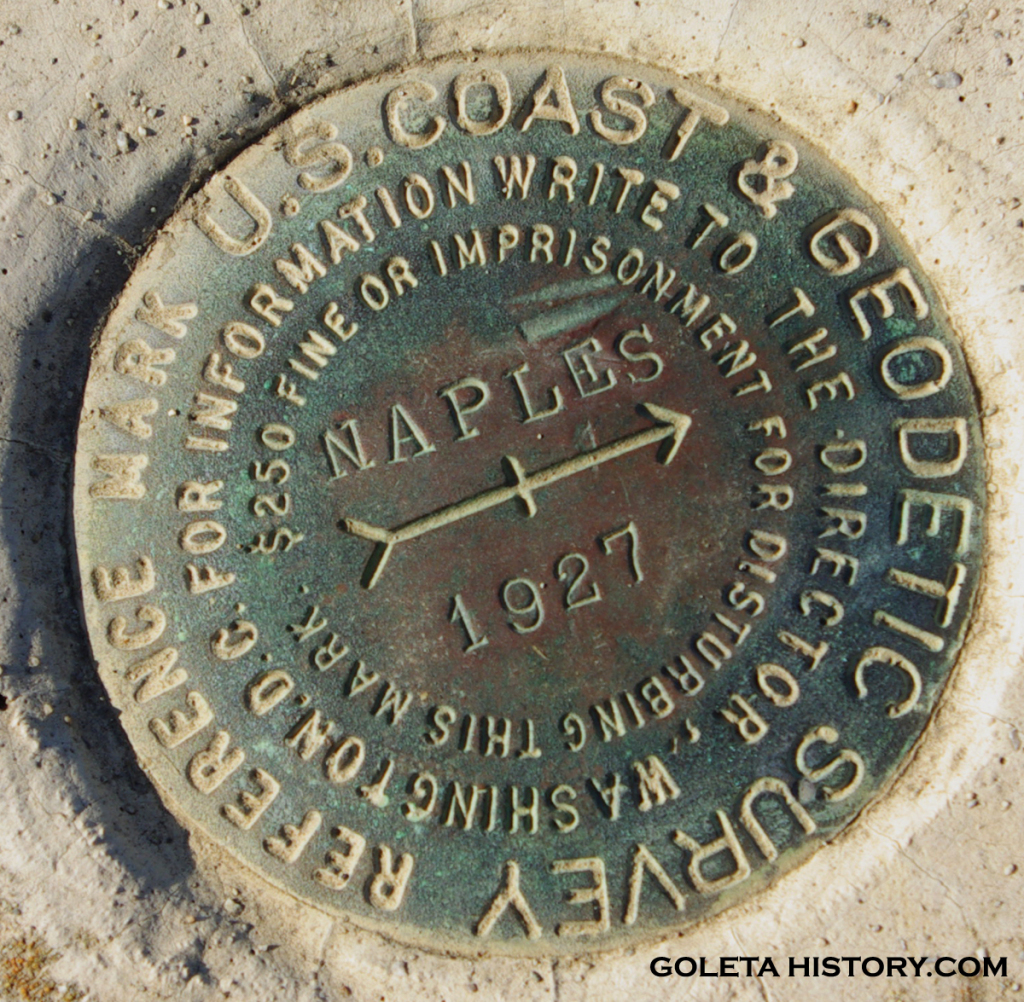 While H.G. Wylie did his best to erase the Naples name from history, it lingered. Fifty years after this reference mark was planted on the beautiful coastal bluff, the Morehart Land Company purchased Naples. They didn’t think John Williams plan was that outrageous.

In fact, they kind of liked it….

After years of legal wrangling, Morehart got the County to approve an Official Map of the Naples Township, originally drawn up in 1888. 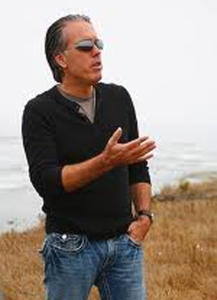 Enter Matt Osgood. His development company from Orange County picked up where John and Alice Williams left off, and they would have been proud of his determination. He battled for ten years against environmental groups, and his reward was to be foreclosed upon by his lenders. The lawsuits continue to fly to this day.

Meanwhile, the beautiful stretch of California coast that resembles Naples, Italy sits quietly, oblivious to all of the trials and tribulations fueled by man’s desire to capitalize on natures perfection.

If you would like to help nature win this battle, the Gaviota Coast Conservancy is dedicated to long-term strategies to permanently protect the Gaviota Coast. You can help join them in their efforts to preserve this beautiful and irreplaceable national treasure.

There are a lot more interesting details to the story of Naples.  Read them in Walker A. Tompkins classic book Santa Barbara’s Royal Rancho.