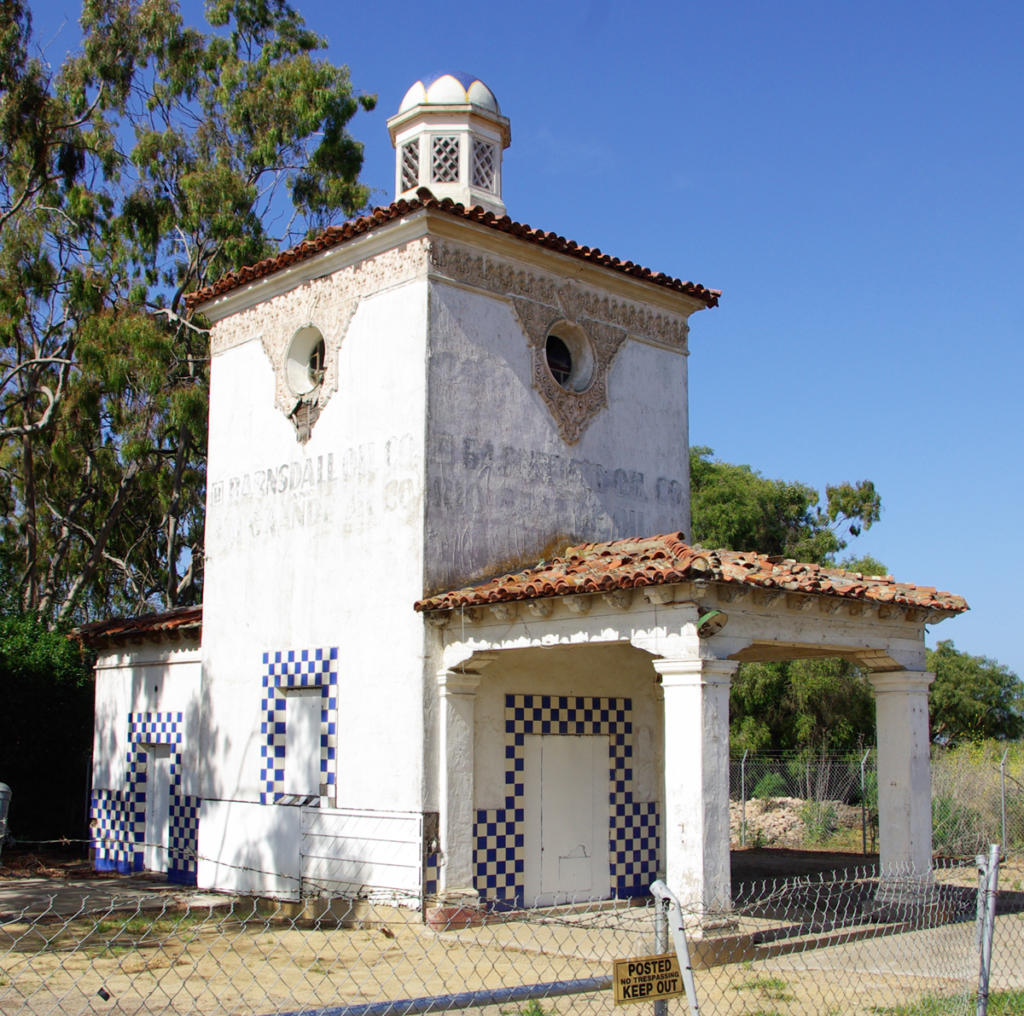 If you’re driving past Sandpiper Golf course on Hollister Avenue, you can’t help but notice this distinguished looking building, standing proud among the weeds. An almost forgotten landmark in Goleta, the Barnsdall-Rio Grande gas station is a reminder of a simpler time. Located beside what was once a vast oil field, the building is showing it’s age, but it’s a very unique structure and its elegant architecture is still evident today. 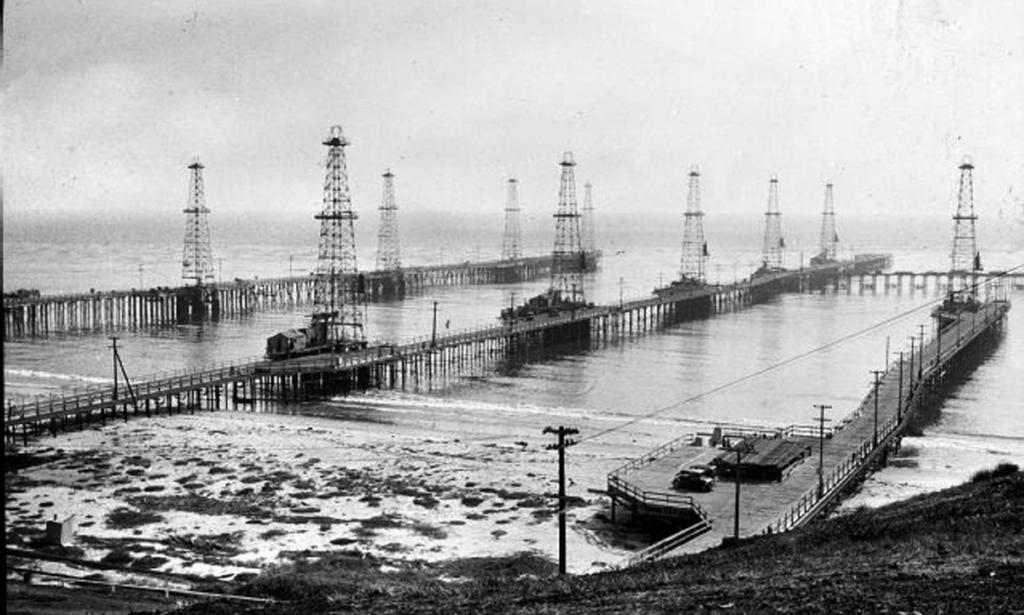 It’s a product of a time when “green” was just the name of a color. Oil was big money, and the Barnsdall-Rio Grande oil company was making plenty of it at Ellwood. In 1928, an oil strike quickly made the little company a major player on the New York Stock Exchange, and almost overnight, they were the county’s biggest taxpayer. 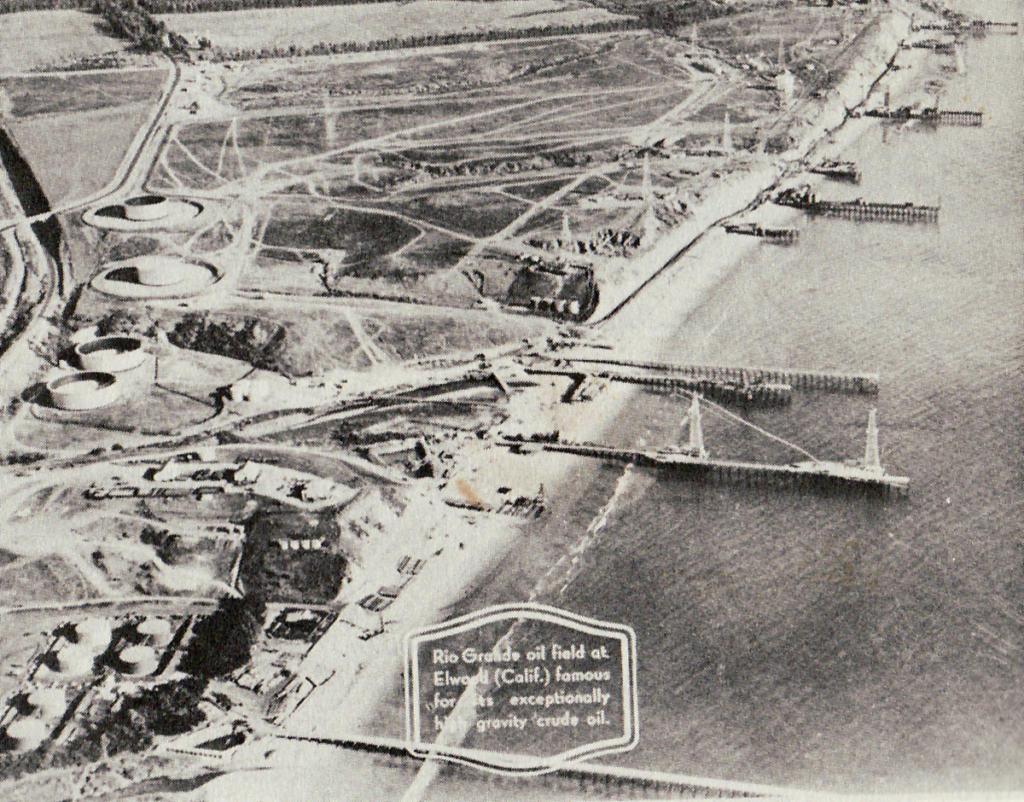 At one time, Ellwood was the most productive oil field in the world, yielding over 100 million barrels of oil in over three decades. As the caption on this photo from 1930 states, “Rio Grande oil field at Ellwood California, famous for it’s exceptionally high gravity crude oil.” 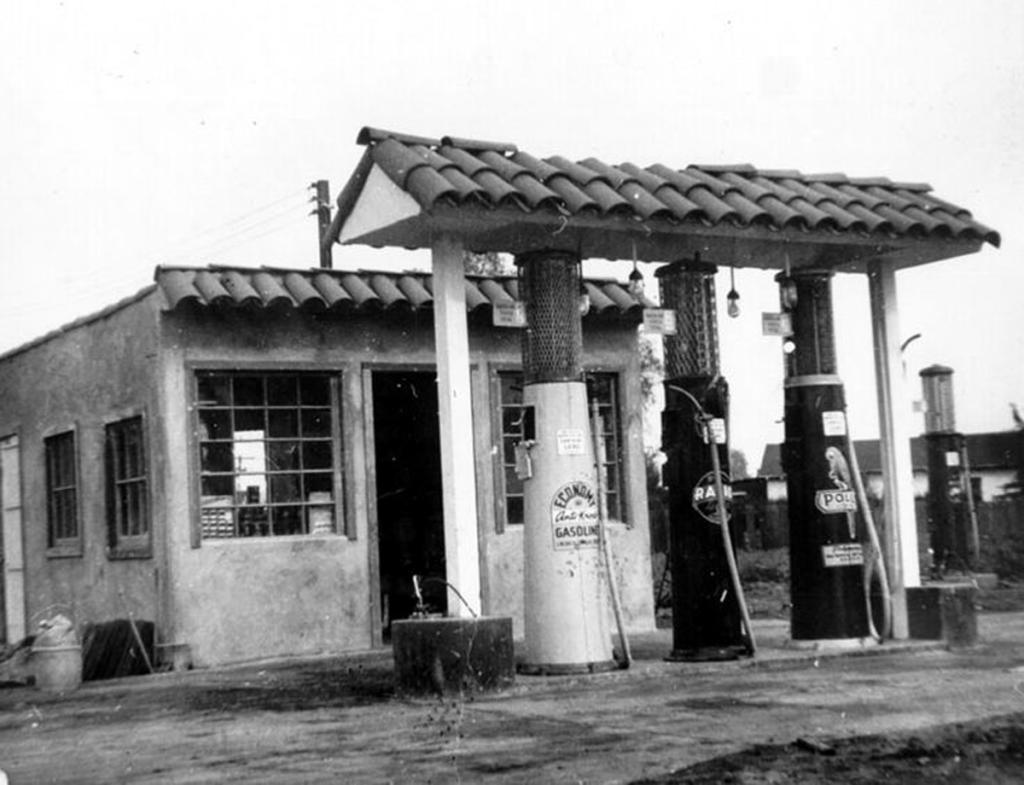 Most “filling stations” at the time were plain, unattractive, boxlike structures. When Pearl Chase began her program of civic improvements to the Santa Barbara area, she wanted to upgrade their appearance.

Many buildings were constructed in the Ellwood area to support the booming oil fields, but when Barnsdall-Rio Grande decided to build a filling station on the State Highway adjacent to their booming fields, they wanted it to be a showpiece. Pearl Chase was surely pleased.

An exclusive architecture firm out of Los Angeles was selected and the product of their efforts was completed and opened for business in 1929. A classic example of Spanish colonial revival architecture. 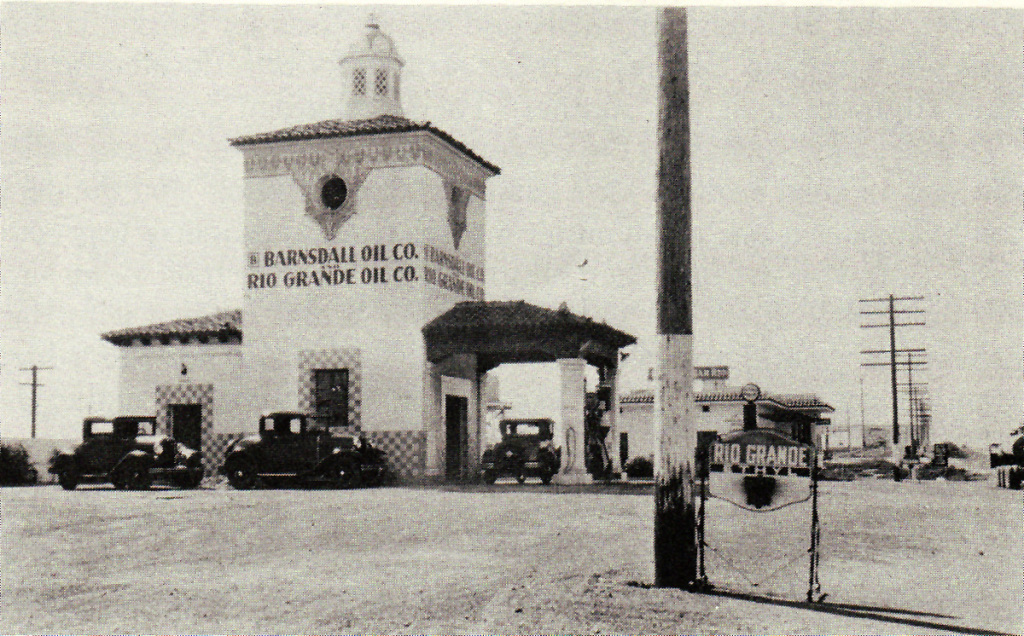 Standing 40 feet high, the white plaster walls, blue and white ceramic tiles and red mission roof tiles made quite a flagship. In the years to come, the station would win several awards for it’s beauty. 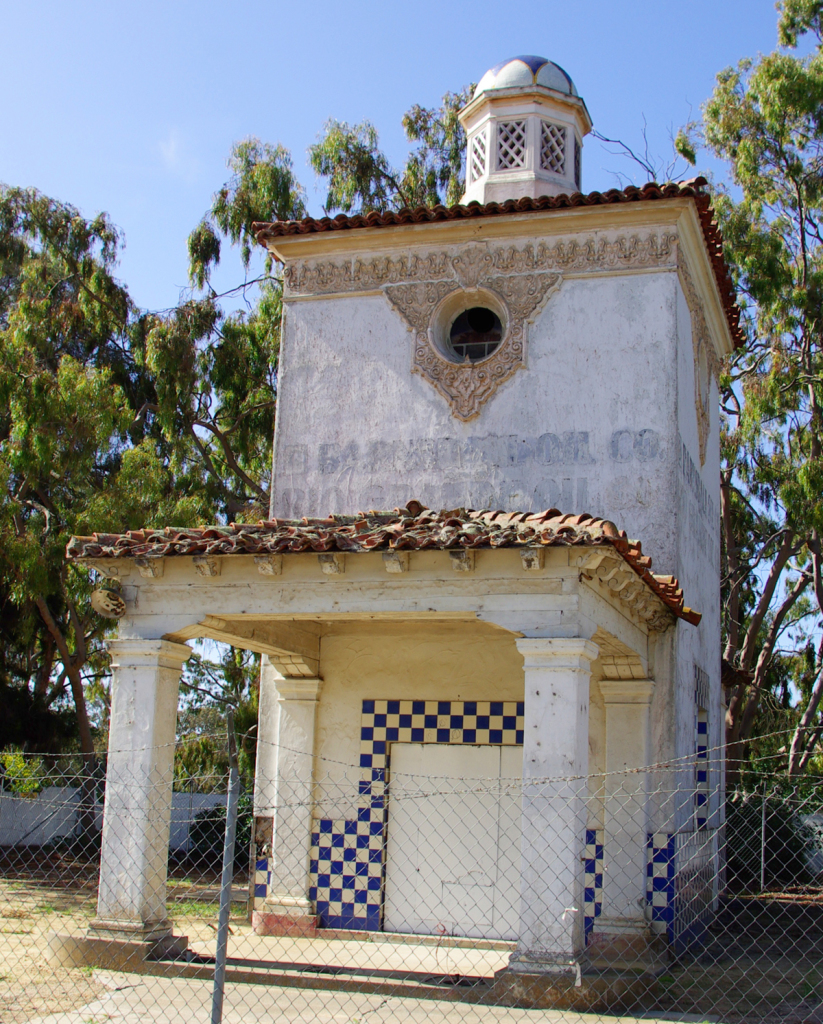 And despite years of neglect, the beauty of the design still shines through. 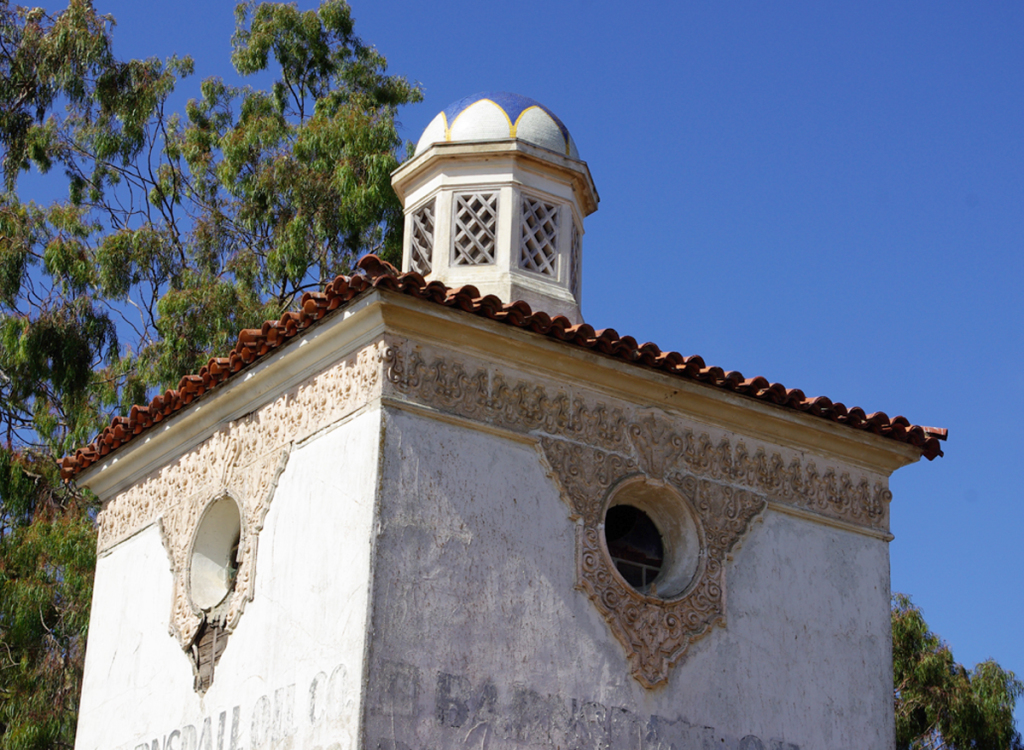 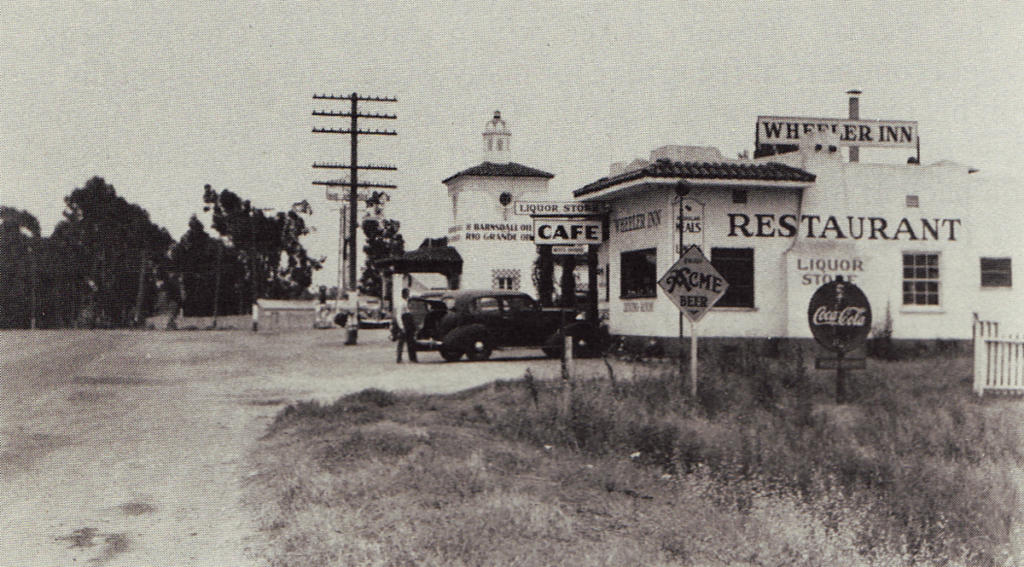 In 1931 the Barnsdall- Rio Grande added a restaurant next door. It was called “Wheeler’s Inn”, named for the husband and wife that ran it. Eventually they added a family apartment and a liquor store. This location became a popular meeting place for locals and travelers alike. A fairly regular customer at the station and the restaurant was William Randolph Hearst, who made Ellwood a midway stop between Los Angeles and his little place up at San Simeon.

This is Wheeler’s son, Marshall, looking pretty pleased with his sweet Oldsmobile. 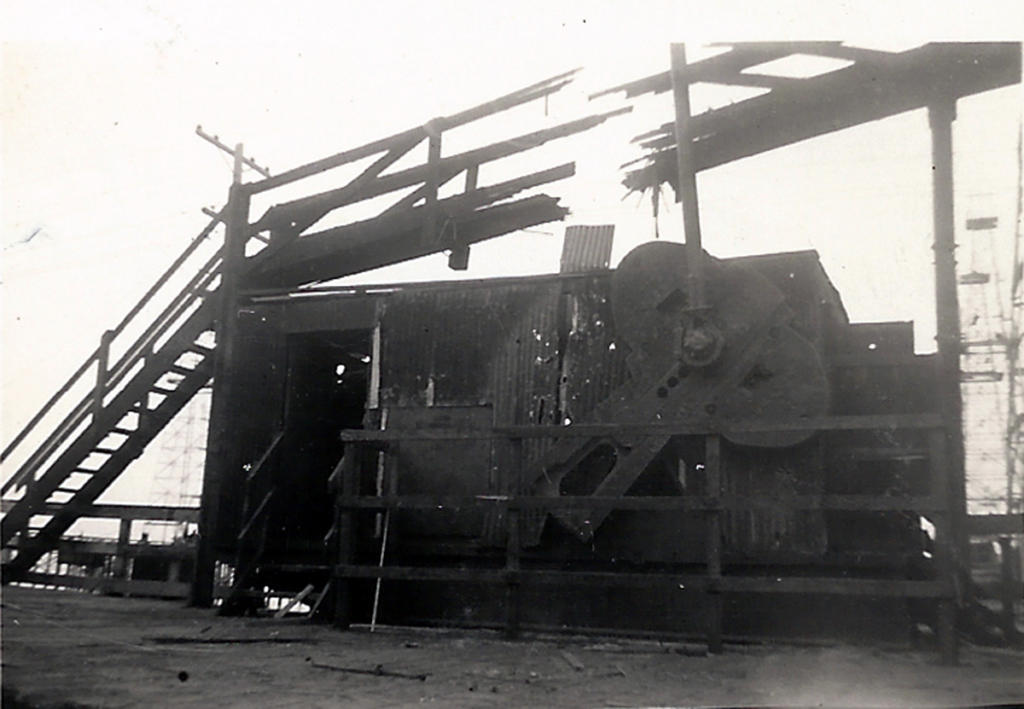 In 1942, a Japanese submarine bombarded the Ellwood field, sending shells whizzing by the gas station and some landing in close proximity. Their attack caused no real damage to the facility, but it did have a devastating effect on Wheeler’s Inn. After an initial swarm of curious sightseers, fears of a repeat attack and local blackouts forced the Wheeler’s to close up shop and relocate to 37 E. Victoria St. in Santa Barbara. 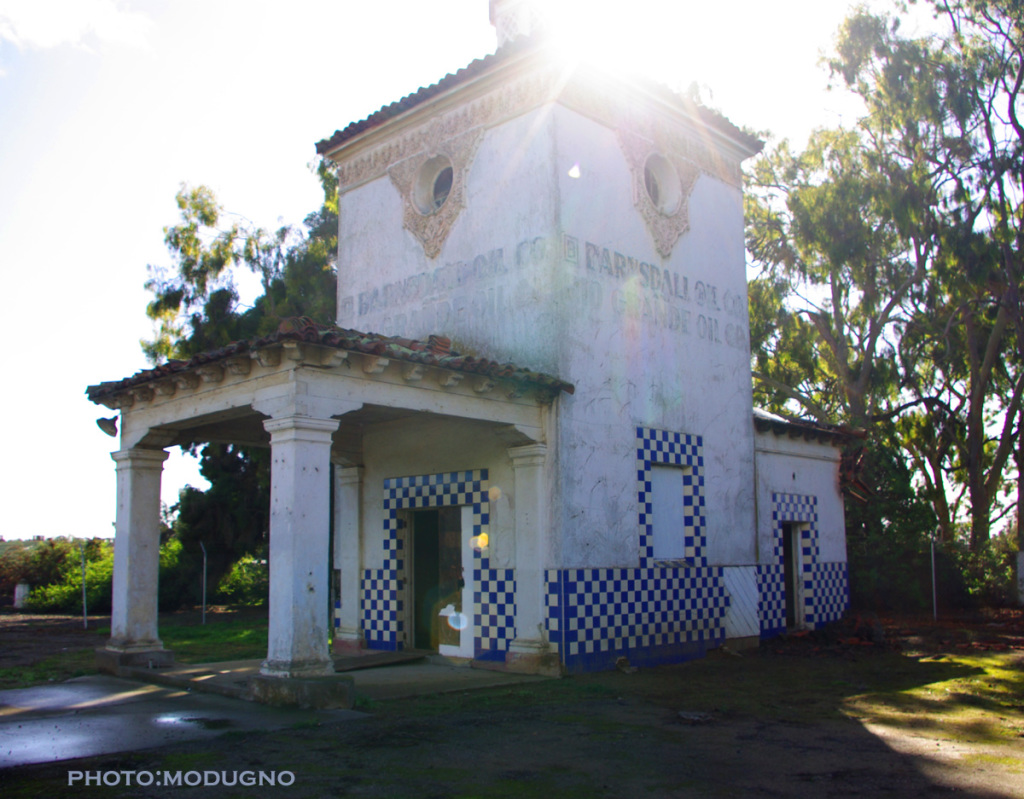 The rerouting of Highway 101 was completed in 1947, bypassing Ellwood and isolating the Barnsdall-Rio Grande filling station from traffic. By the early 1950’s, the station was closed. 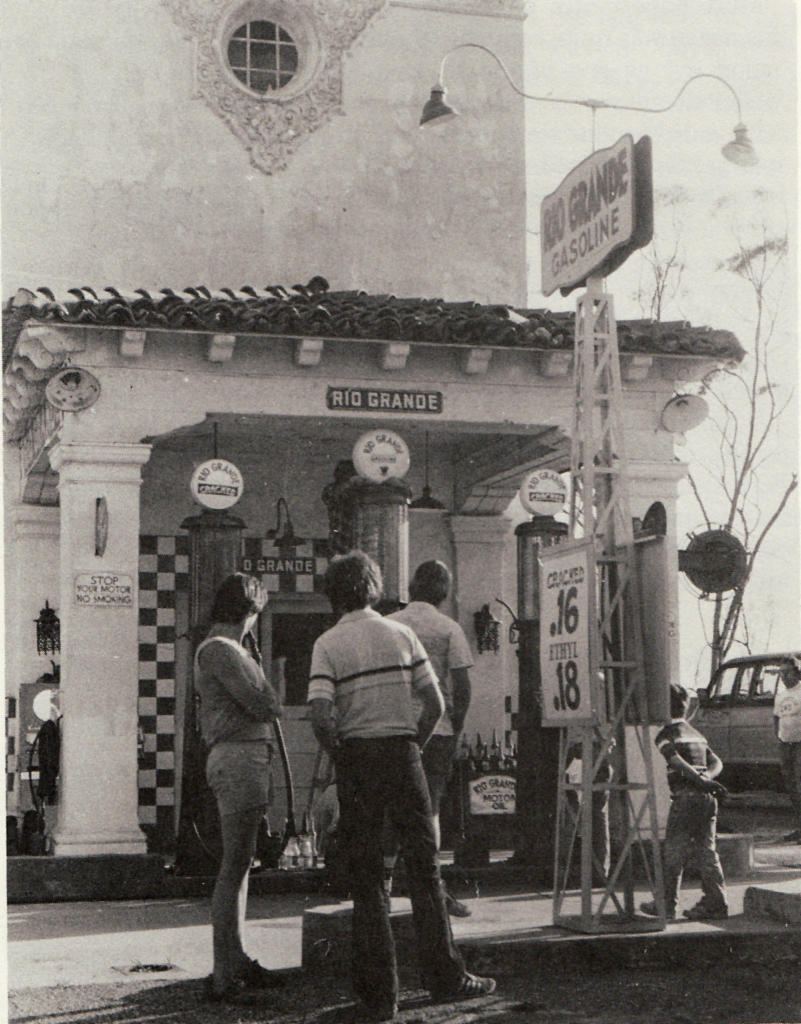 It did relive it’s former glory for one brief moment in 1980, when United Artists used it in a scene for a remake of “The Postman Always Rings Twice”, starring Jack Nicholson and Jessica Lange. 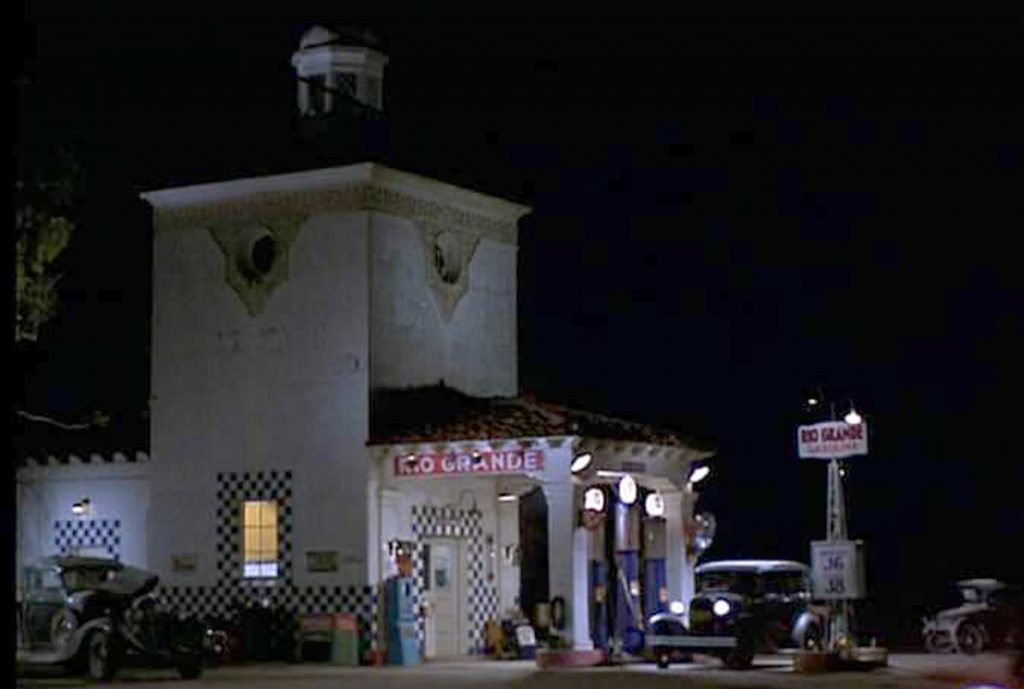 They made it look good as new for a few days. 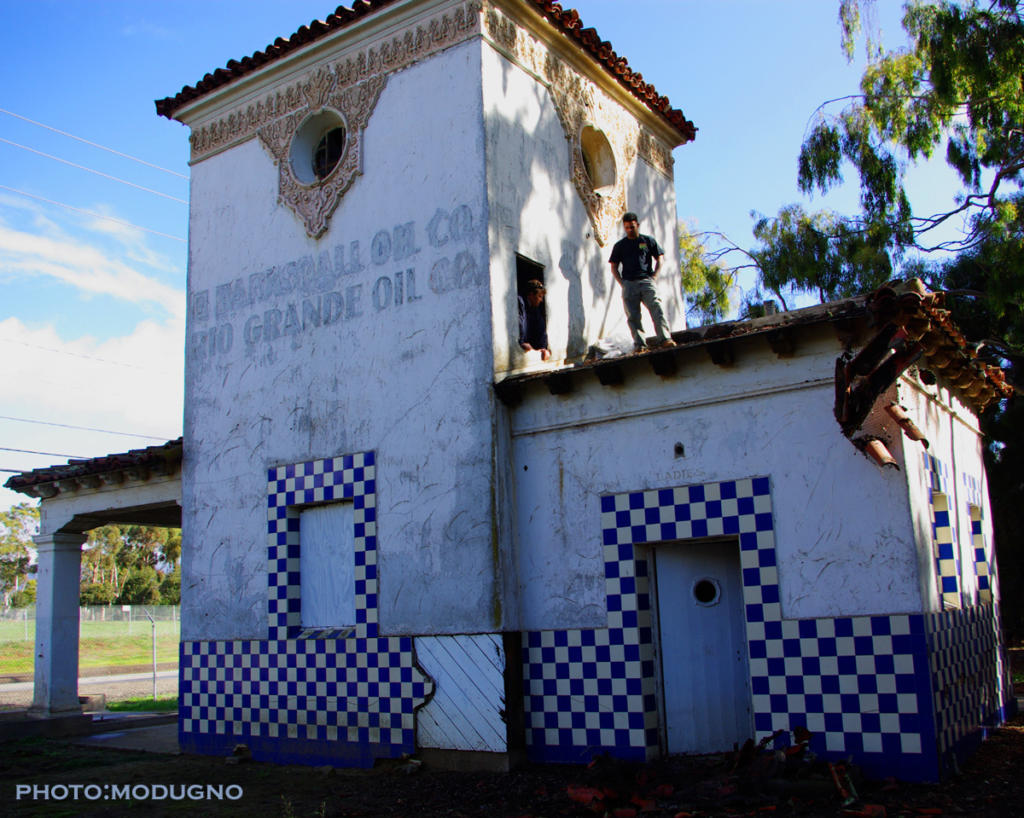 A while back, we found a construction crew surveying the building. They mentioned the owner restoring the building to it’s former glory, but so far, nothing has happened. With all the growth around it, it would seem like a good place for a business venture or a museum perhaps? 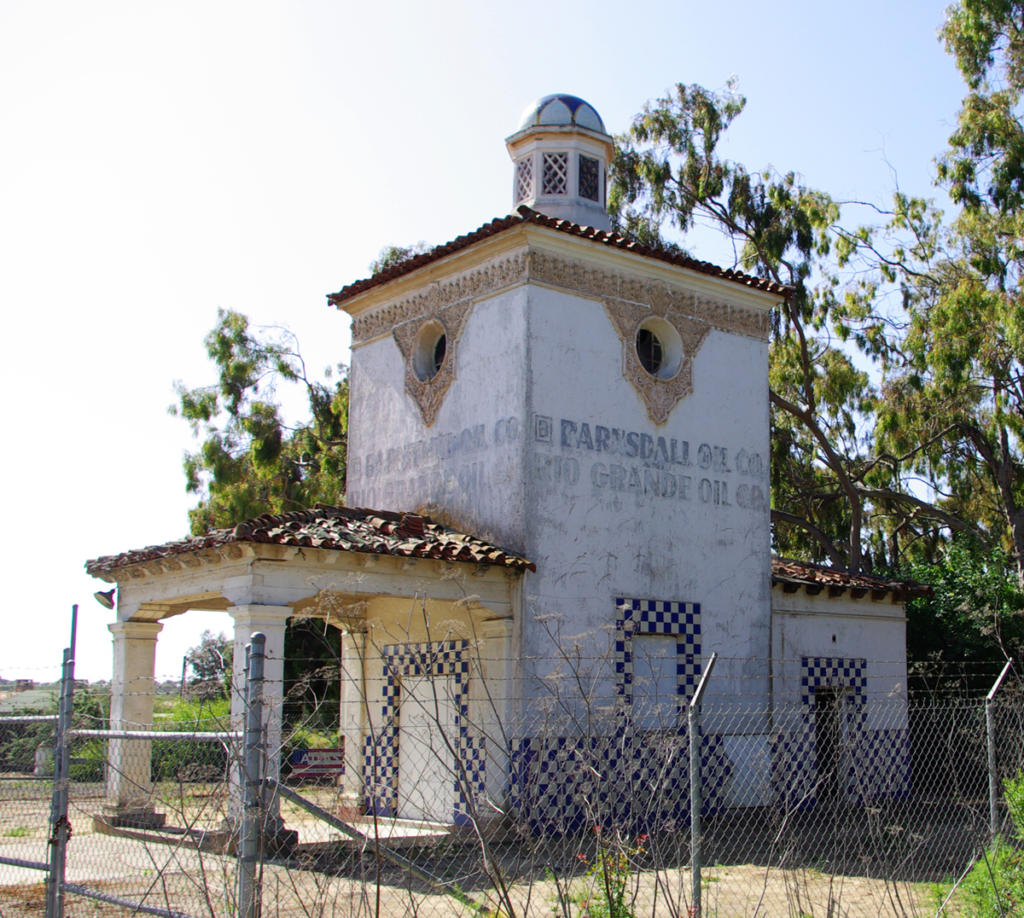 Hopefully someone will save it from it’s slow decay and this piece of Goleta history will live on for future generations to enjoy. 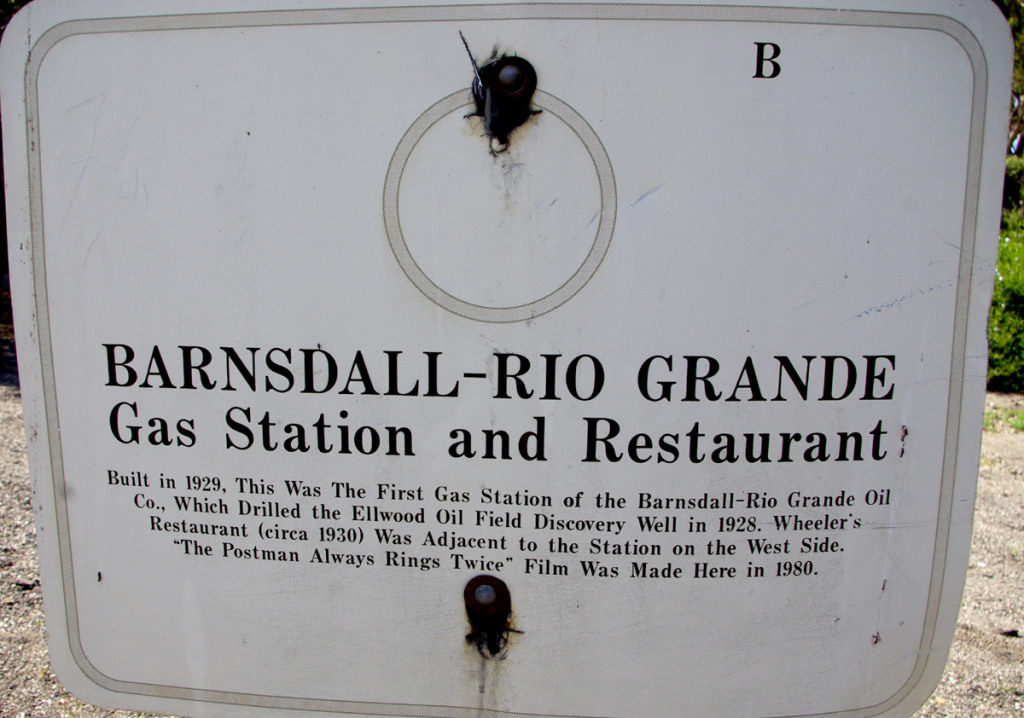 See the petition we started to help preserve this beautiful building. 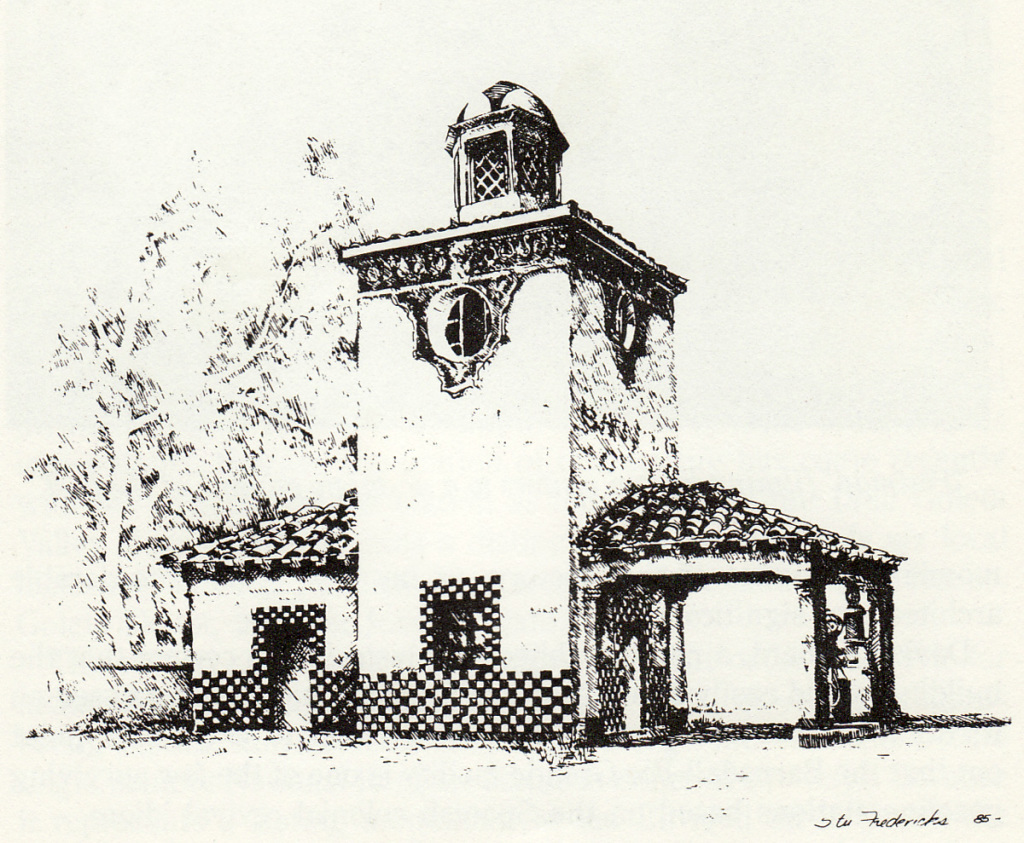 * Old photos and information provided by Gary Coombs and Phyllis Olsen, from their book, “Sentinel at Ellwood”, 1985.  New photos by Goleta History.com.

Get a cool shirt with an original sketch of this building! Click here to check it out.

To learn why this historic building hasn’t been saved yet  Click Here.