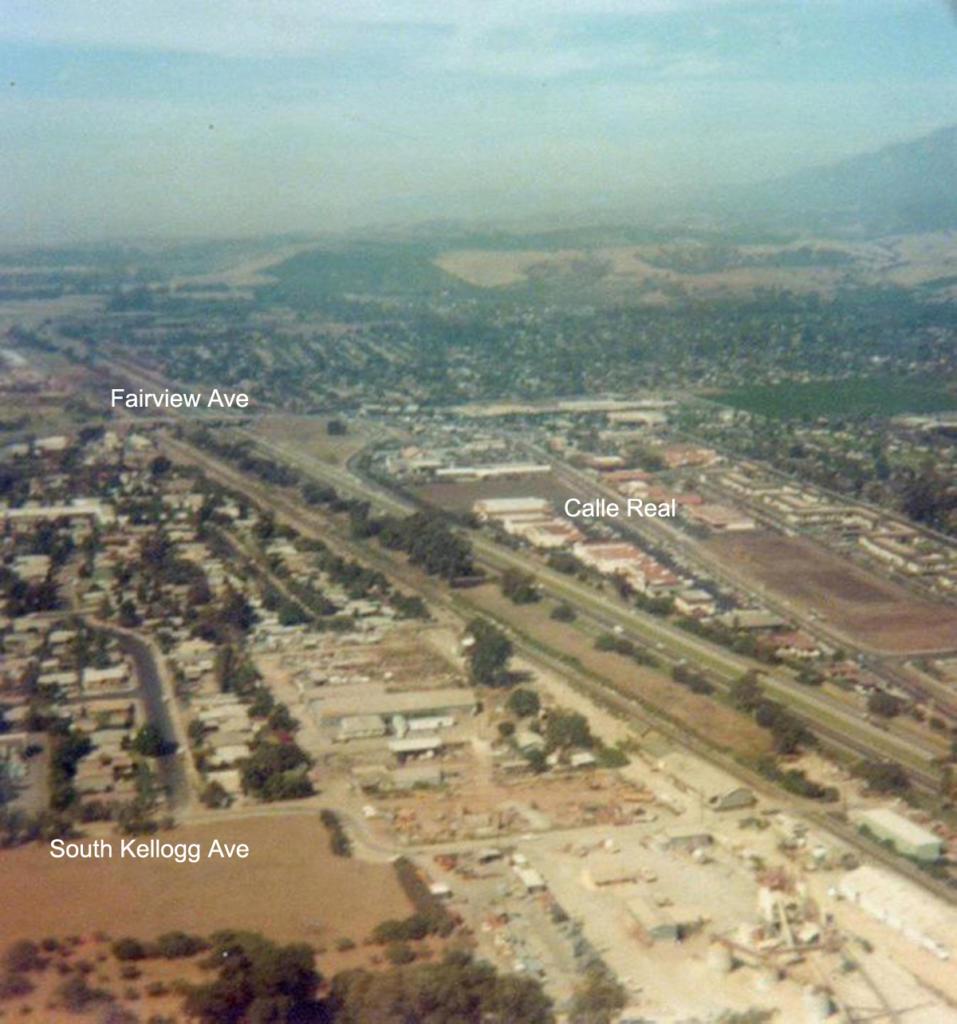 August 13, 1978. A sunny Sunday afternoon in the Goleta Valley. Somewhere underneath the Santa Barbara Channel, the earth shifted abruptly, causing a magnitude 5.2 earthquake.

The initial rupture started on an offshore fault, south of the city of Santa Barbara, at a depth of about 5.5 miles. The earthquake then ruptured northwestward, focusing its energy toward Goleta, where the most intense ground motion was between Turnpike Road and Winchester Canyon Road. 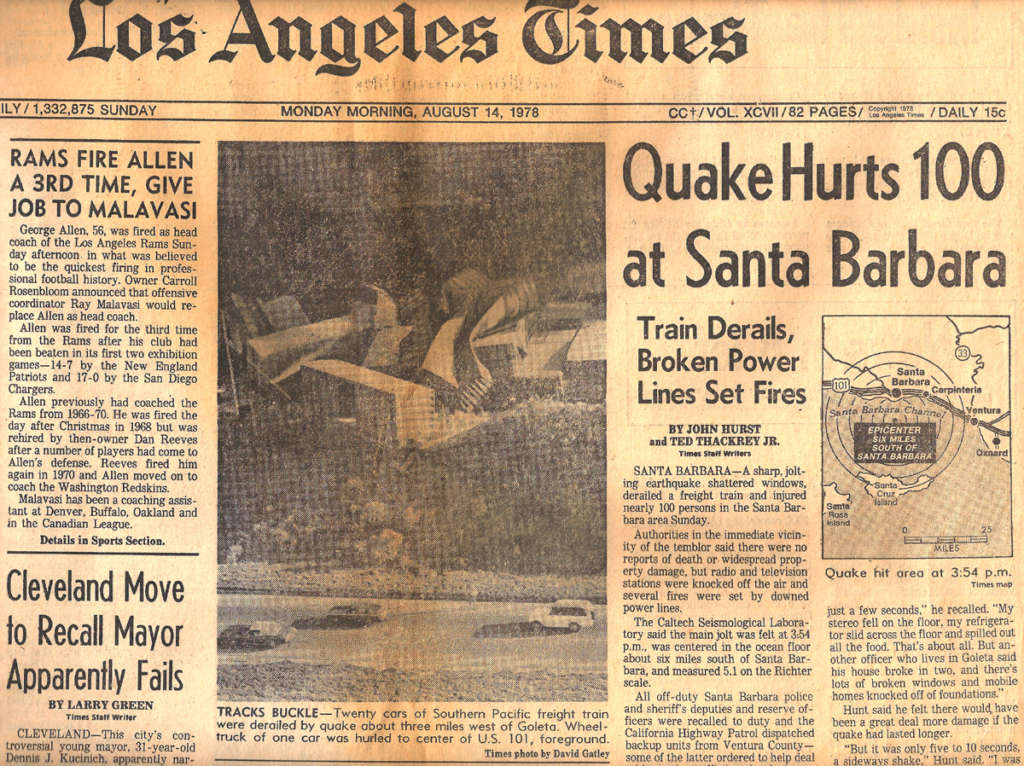 It was described as a sharp, jolting earthquake that thankfully didn’t last too long. All off-duty police, sheriff’s deputies and highway patrol were immediately called on duty. No deaths occurred but sixty-five people were treated for injuries at local hospitals. 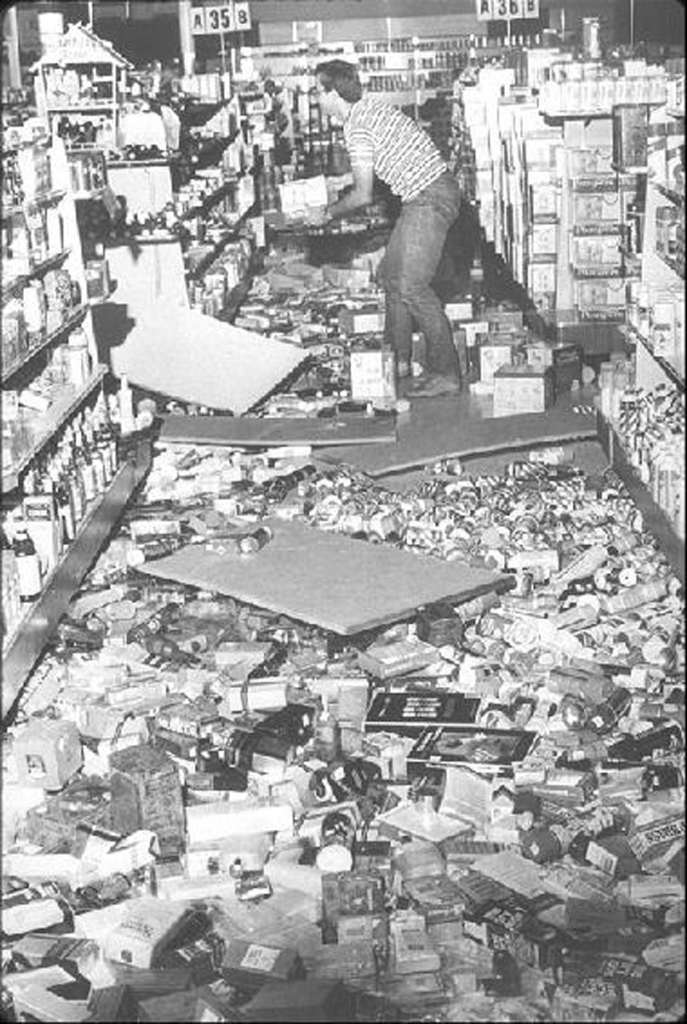 Around Goleta, store goods were thrown to the ground in heaping piles. 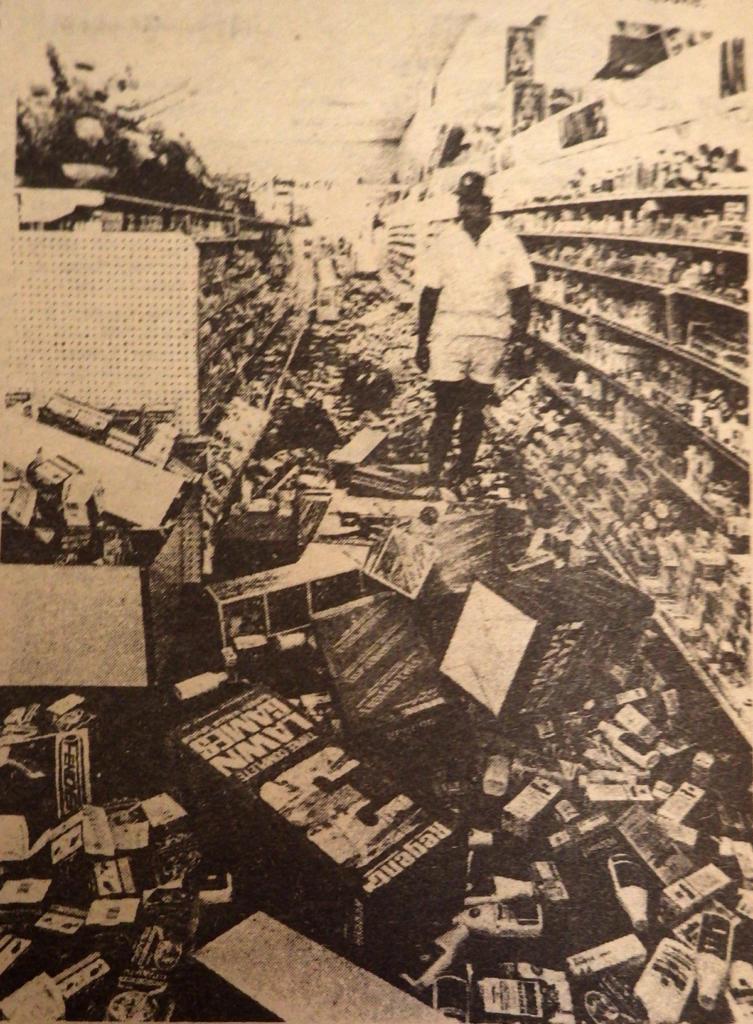 Windows of businesses and residences were shattered, the Santa Barbara airport terminal was left leaning, dozens of mobile homes were thrown from their supports, and a landslide blocked San Marcos Pass causing a huge traffic jam. 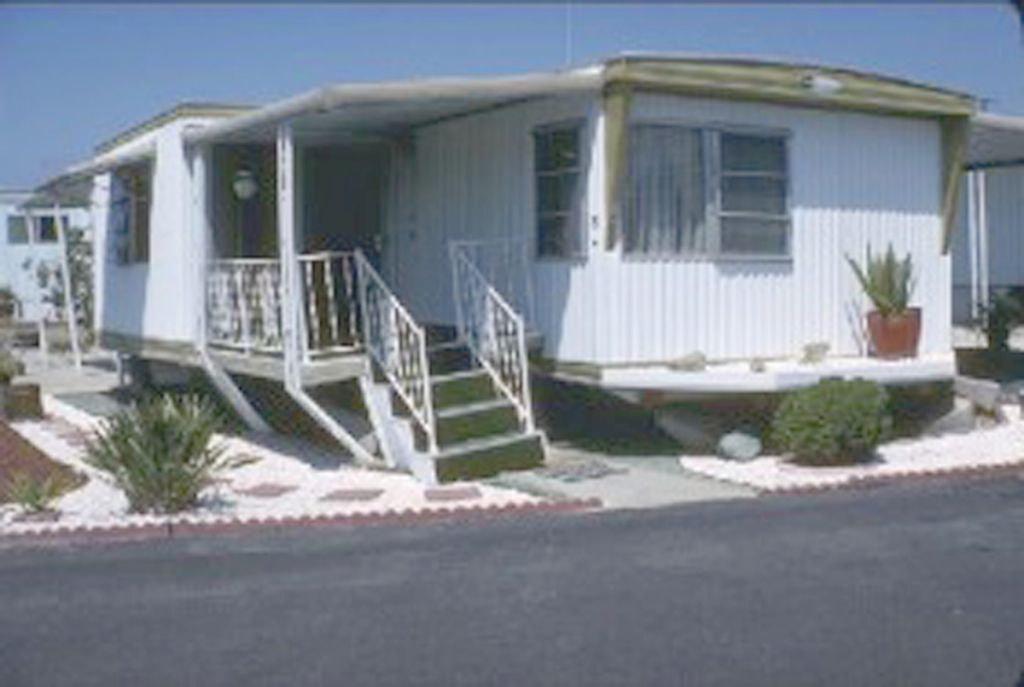 Damage was heaviest in areas nearest the beach. Some water and gas mains were broken, and a two foot fissure opened in the earth near the Airport. About 7,000 people lost electricity for a while. A few fires broke out, but were all out within 30 minutes. 324 mobile homes were damaged in Goleta. Many of these mobile homes were knocked from their pedestals, rupturing gas, water, and electrical connections. Significant structural damage occurred to 10 UCSB buildings and some of the dormitories. The damages included diagonal cracking of lower story walls, most of which were repaired by injecting epoxy into the cracks. In addition, approximately 400,000 books at the library were thrown to the floor. Elsewhere on campus, damage occurred to light fixtures, ceilings, plaster, and instruments and supplies in some labs. In the Chemistry building, chemicals spilled all over laboratory floors and rumors went around that a glass-walled cage holding several rattlesnakes broke, allowing the snakes to make an escape. Total damage at UCSB was set at $3.4 million. 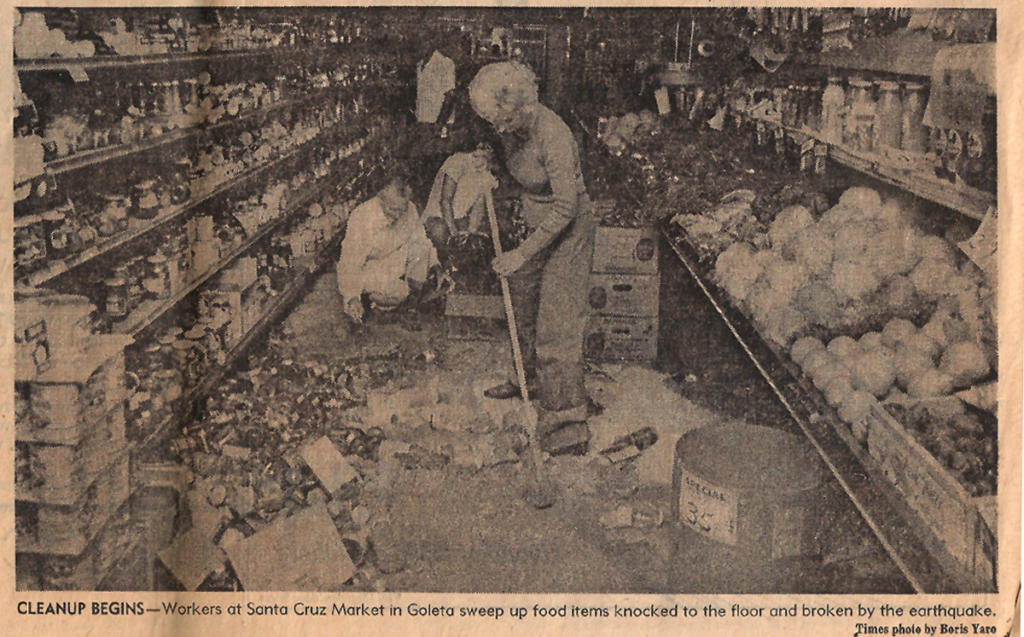 The roofs collapsed at Smith’s Food King, the Bluebird café in Santa Barbara and a residence in Isla Vista. Also, part of the roof at a car dealership in Goleta caved in. Santa Cruz Market in Old Town got it’s picture in the L.A. Times! 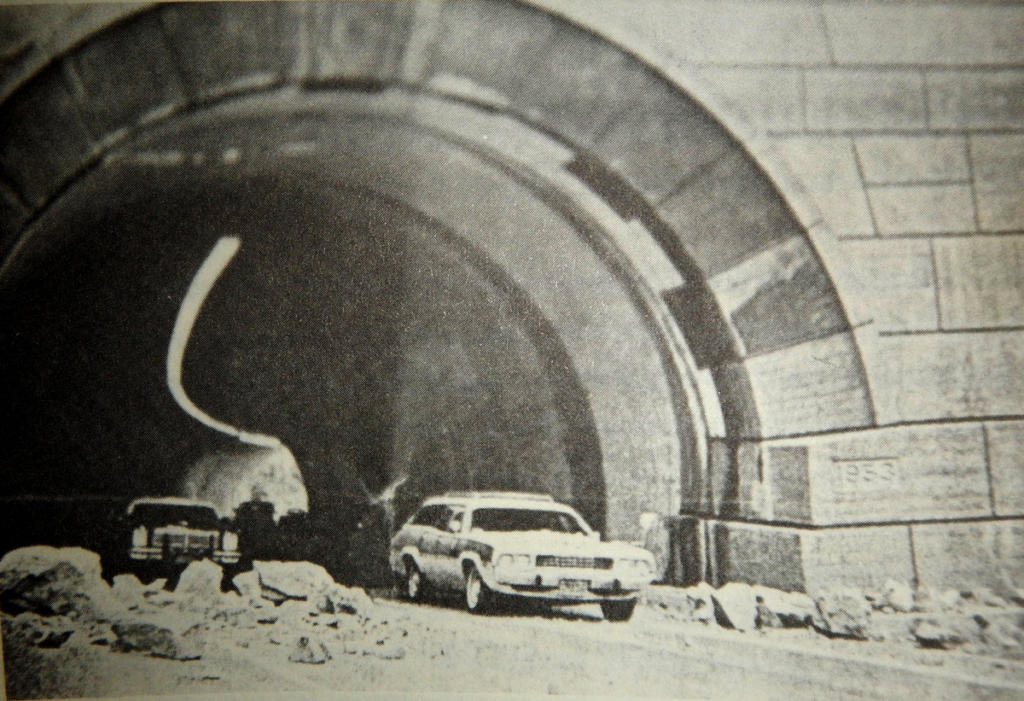 Landslides occurred at the Gaviota Pass, but luckily no one was injured. An emergency ward was hastily set up outside the Goleta Valley hospital, but only about a dozen people were seriously hurt. Burns from scalding water, cuts from broken glass and a car accident were the causes. 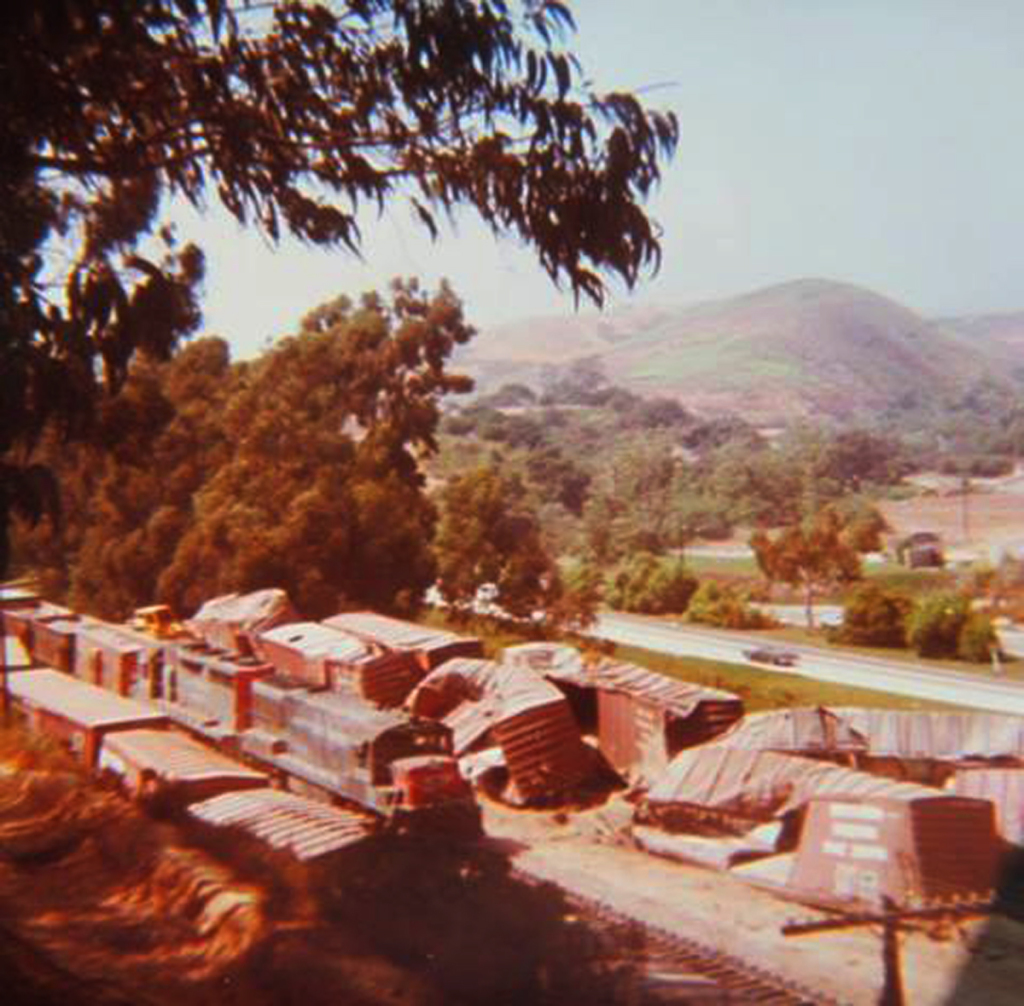 But the most dramatic result of this earthquake didn’t happen until ten minutes after it ended. 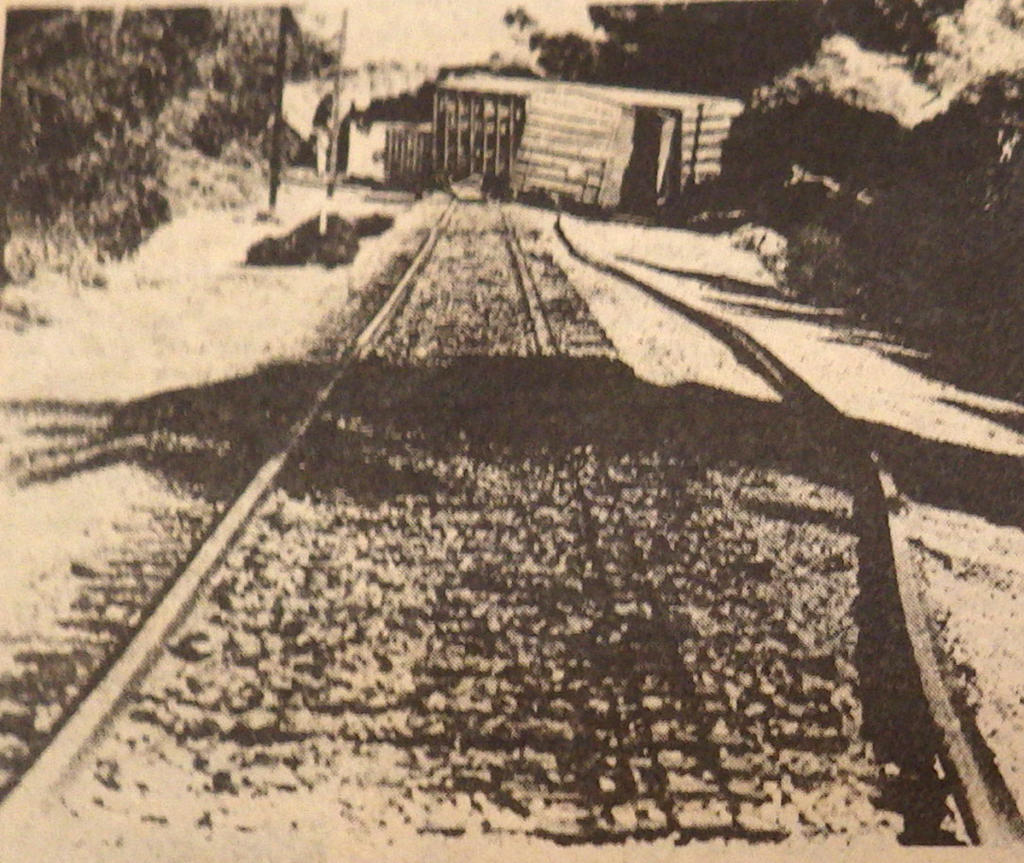 The temblor had created a kink in the tracks adjacent to Haskells Beach. 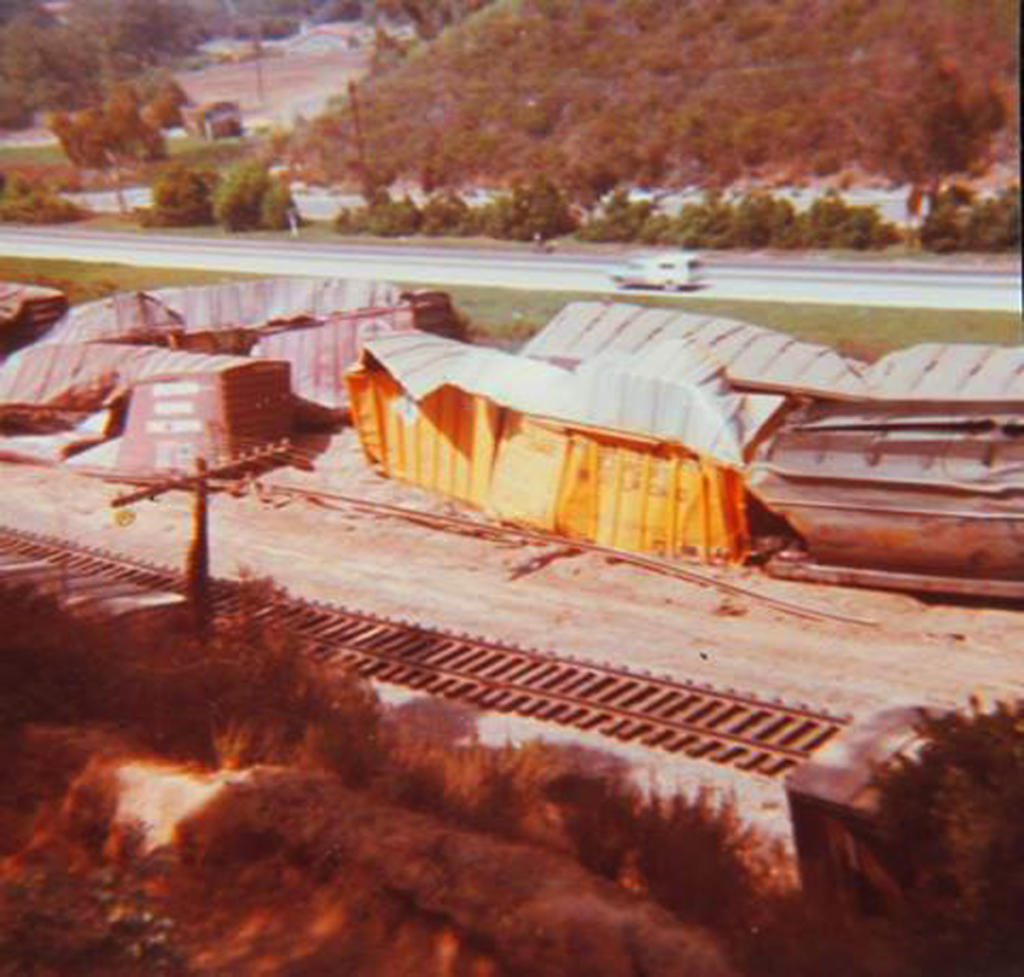 A freight train was moving at approximately 50 miles per hour through Goleta when the conductor noticed the kink in the tracks. The train derailed, but fortunately no one was seriously hurt. 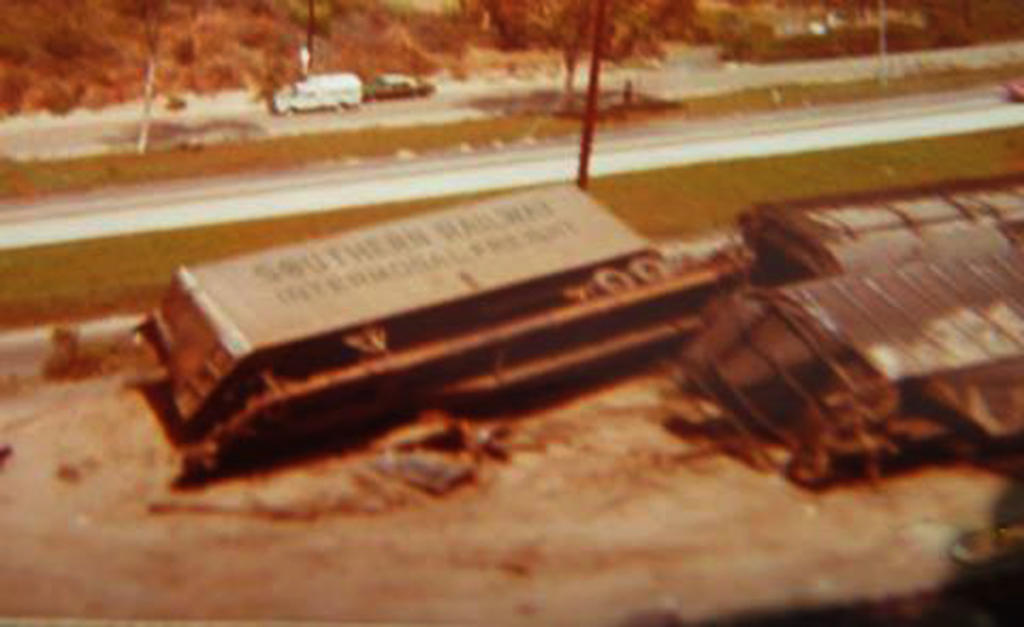 It might have been a different matter, however, if the Amtrak train scheduled to arrive later in the afternoon had gone through first. 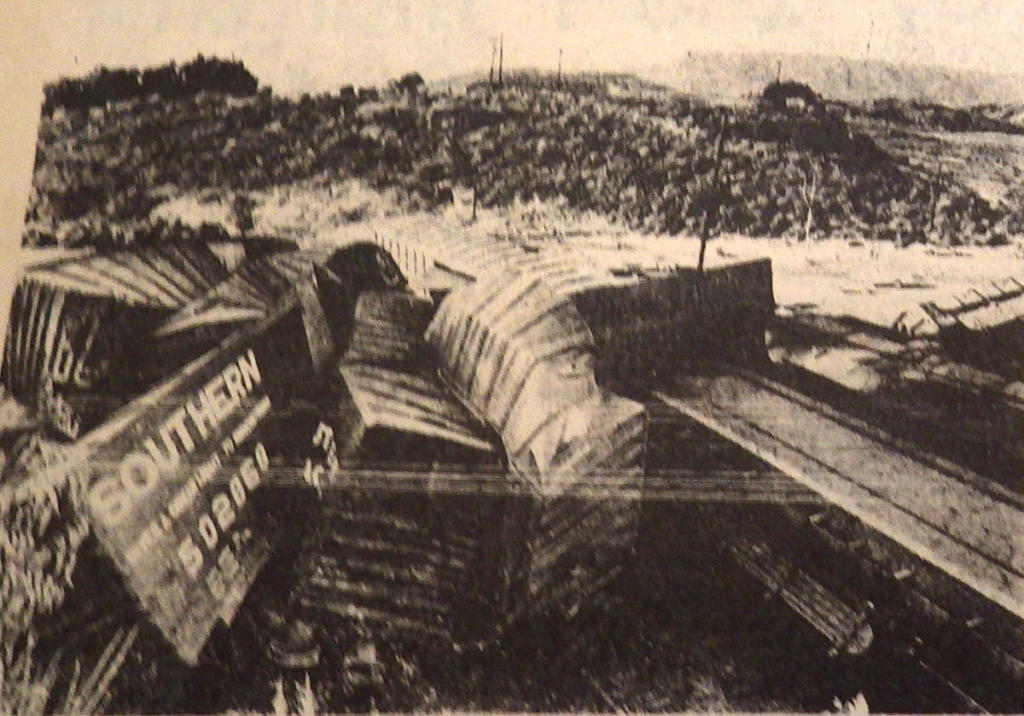 One diesel engine and twenty cars were derailed, some of them “stacked up like dominoes” according to a railroad spokesman. 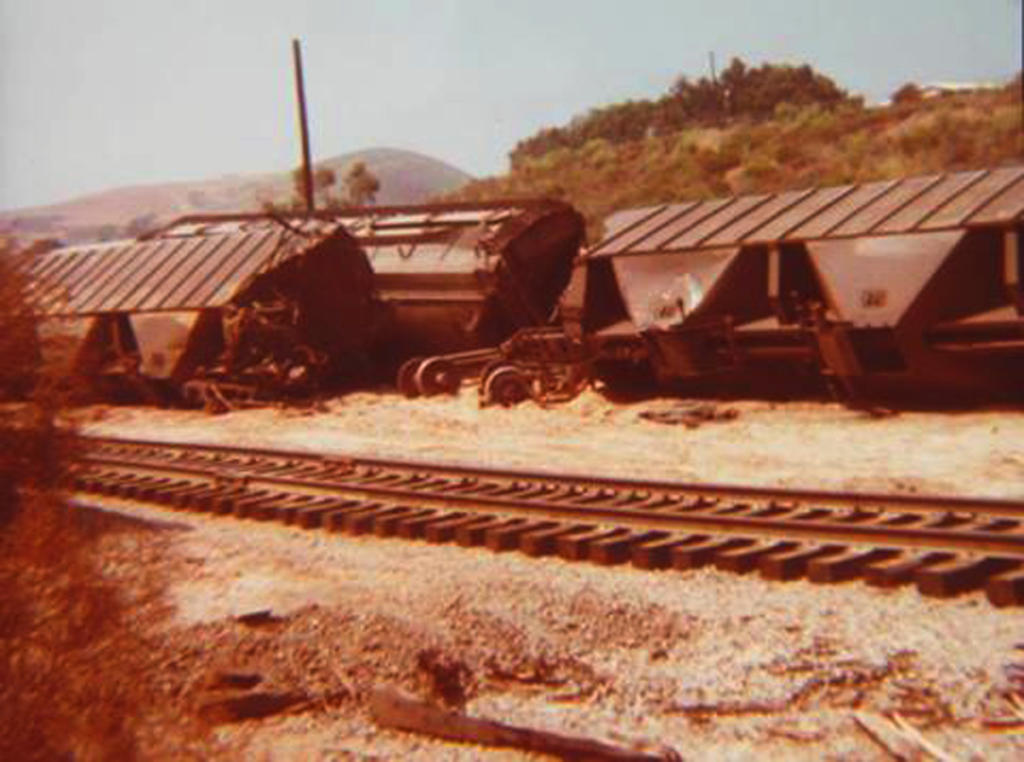 The engineer saw the buckle and stopped as quick as he could, but the damage was extensive. The wheel-truck from one car was hurled all the way to the center divider of the freeway, where it came to rest after brushing the roof of a passing automobile. 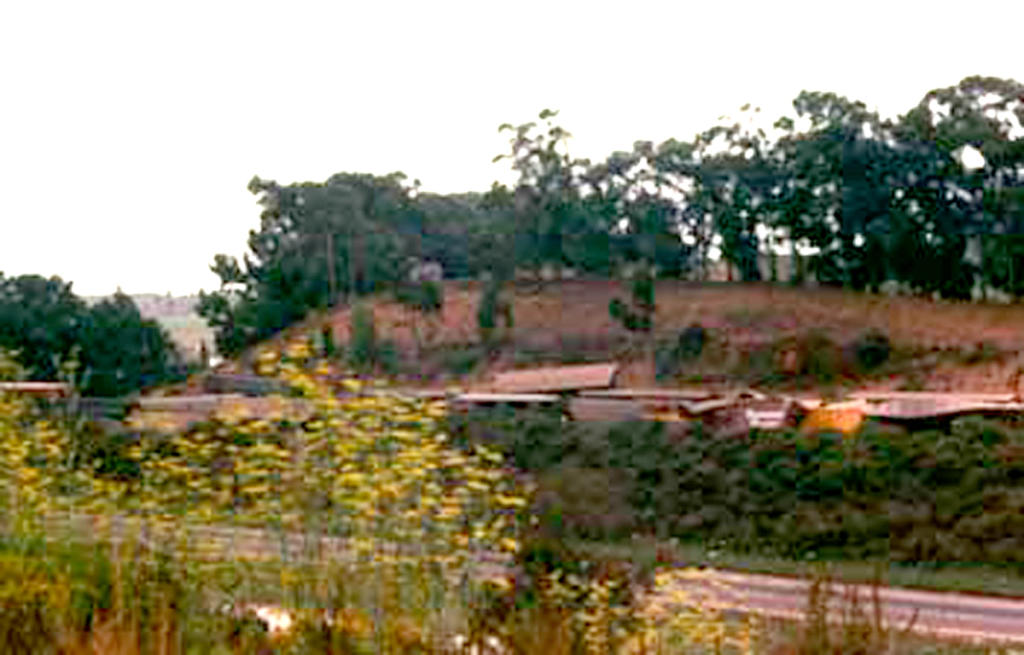 A self propelled crane was brought in from Los Angeles to clear the blockage. 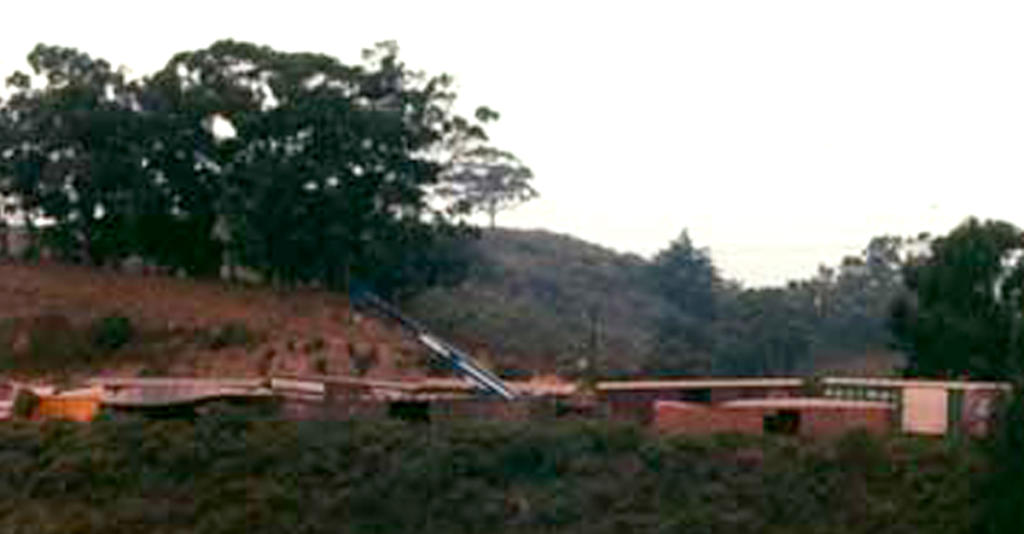 Overall, Goleta came out OK, and the residents all had cool earthquake stories to share. 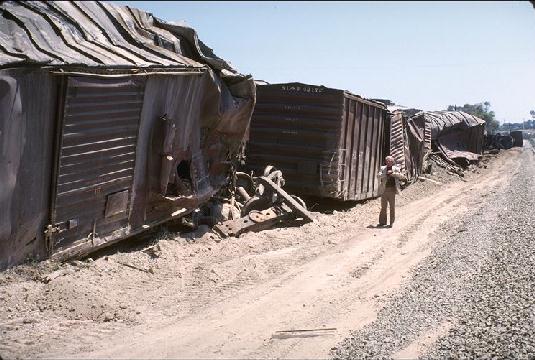 Are you prepared for the next earthquake?