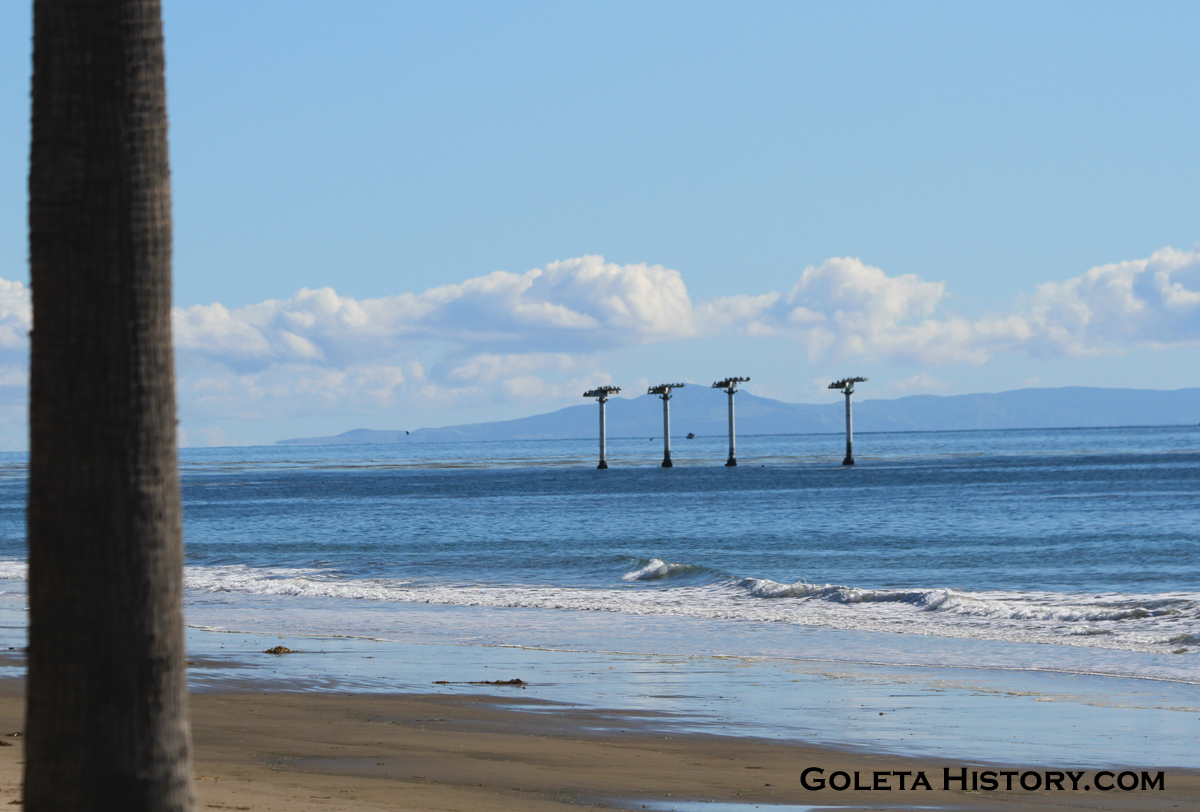 Just off the coast from Sandpiper golf course, these four structures sit quietly. Several times a day people look at them and ask each other, what are those? And usually the answer is a random guess. Here’s the story. 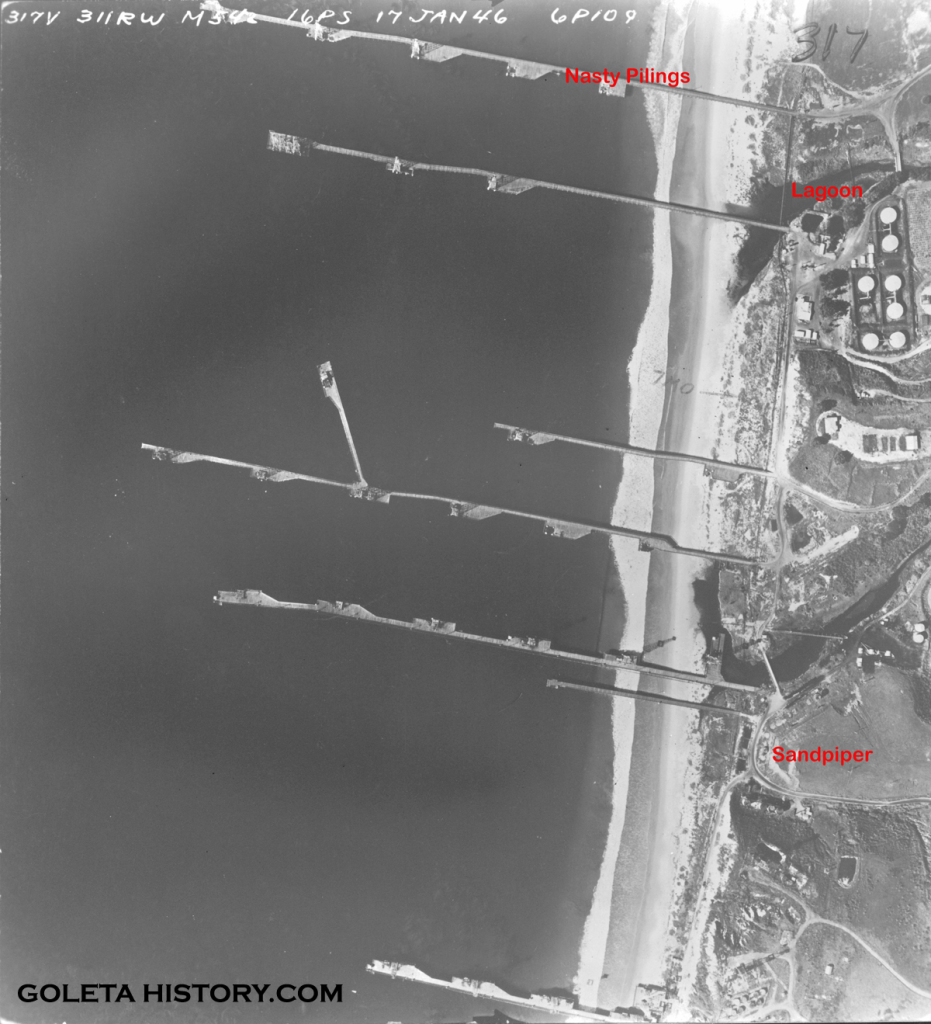 In the early 1930s, Ellwood was a booming oil field. It all started where Sandpiper is today in a well named “Luton-Bell No. 1“. Shortly after they struck oil there, wells sprung up all round the area and the coast got pretty ugly. Eventually some of the well’s production slowed down and they were capped. 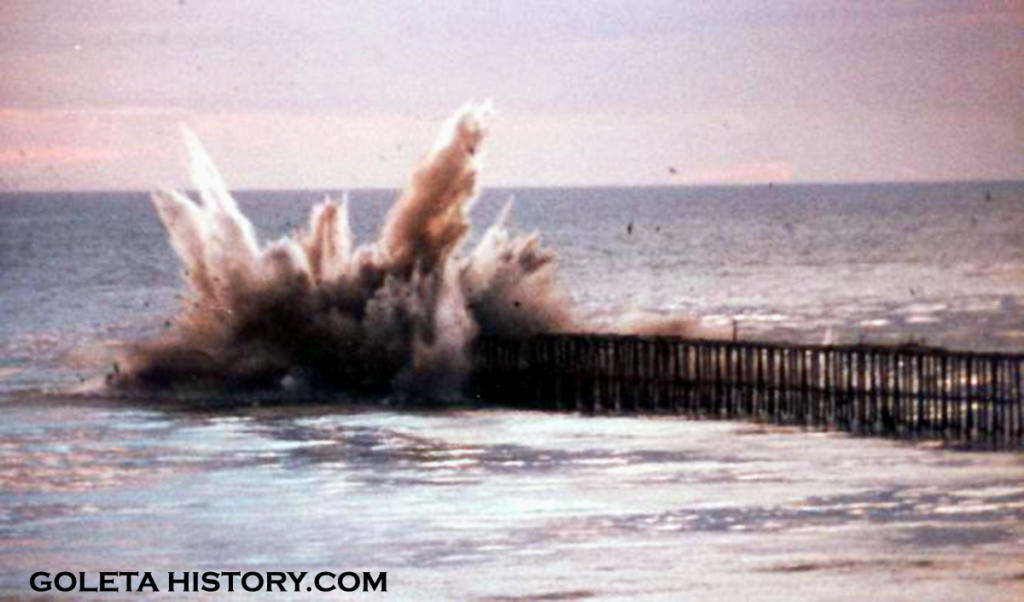 Starting in the 1950s, some wells were permanently plugged and abandoned and portions of the piers were removed. 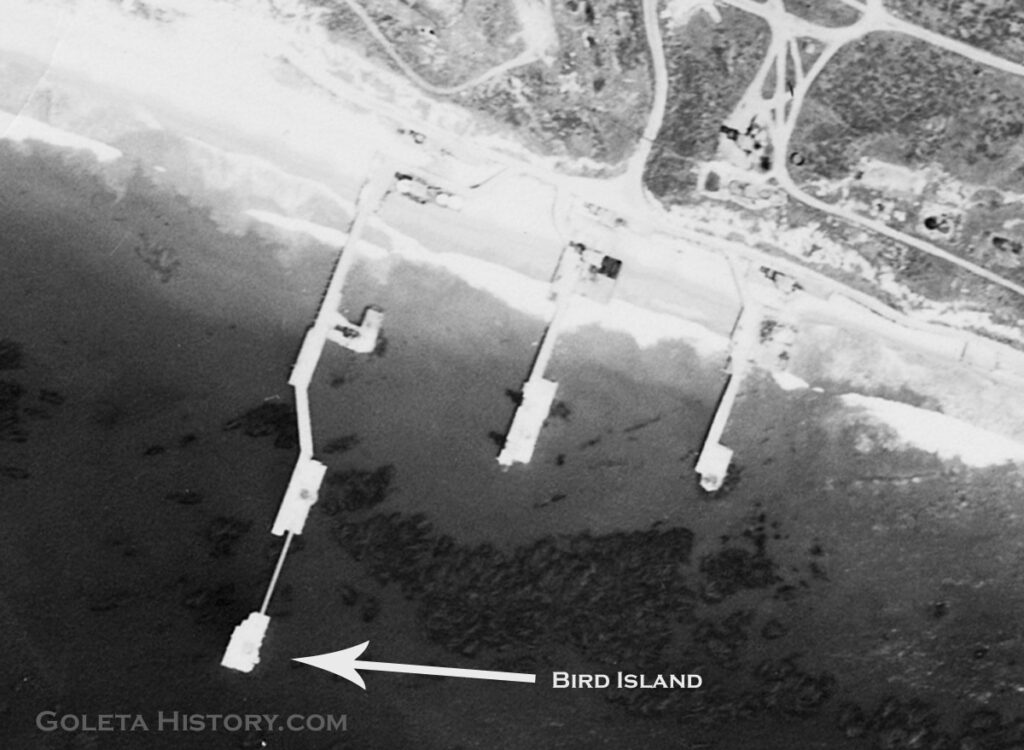 This aerial from 1954 shows the future Bird Island before it was detached from the pier. 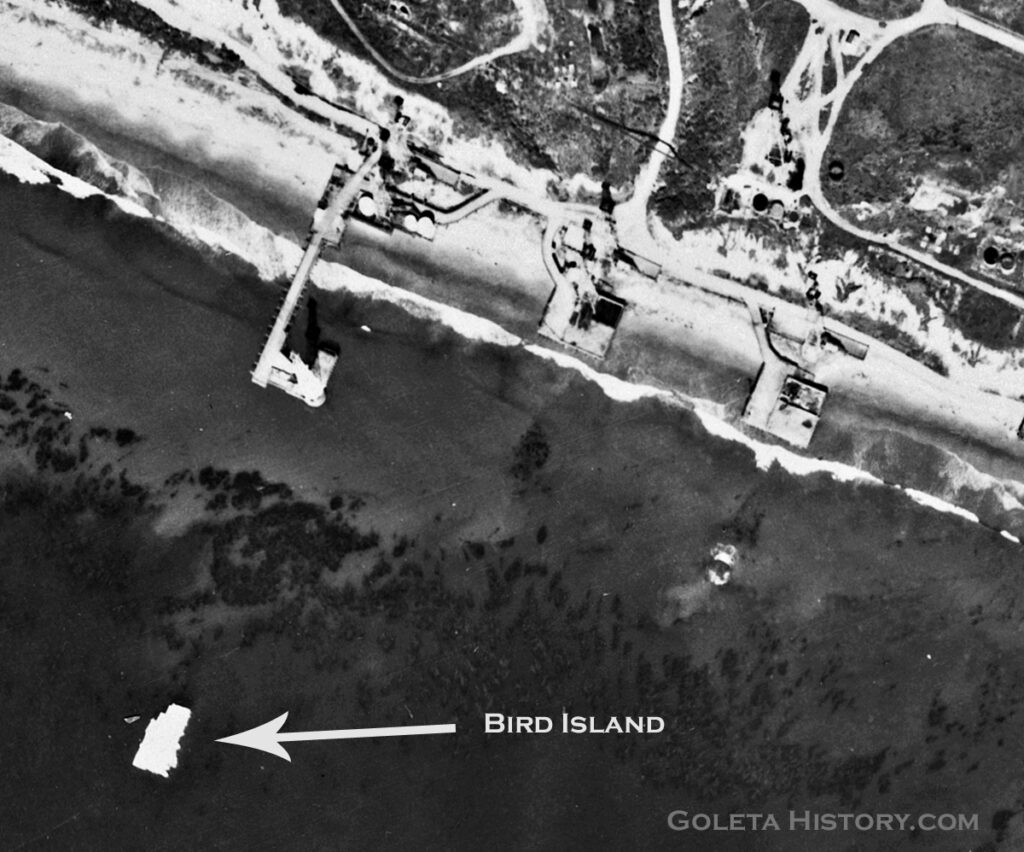 And this photo from 1956 shows it immediately after being detached and most of the other piers removed. Why they left that one little piece is a mystery. 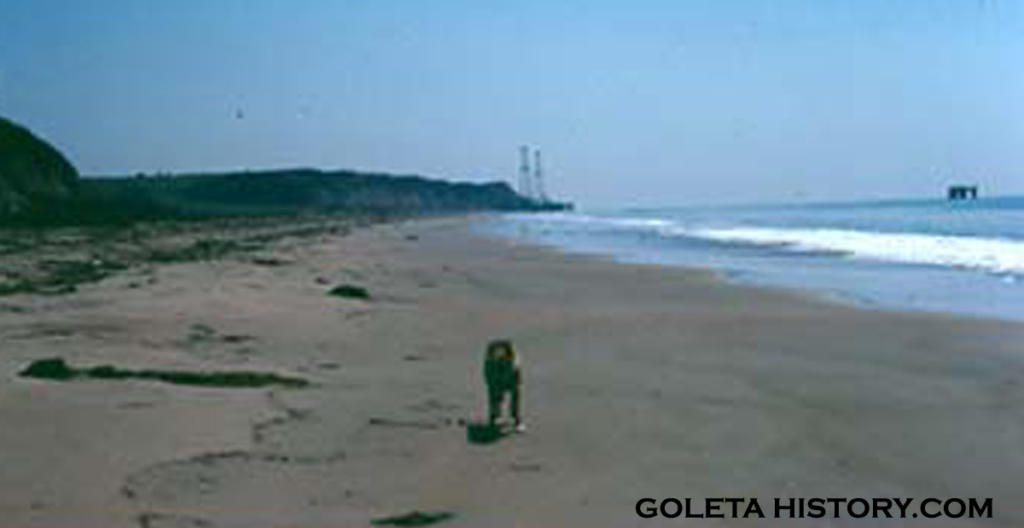 Unfortunately, they did a really bad job of removing them over all, leaving pilings and pipes exposed in shallow water and portions of piers left freestanding. In the background of the 1970 photo above, you can see two remaining well towers in the center and the old Bird Island to the far right. 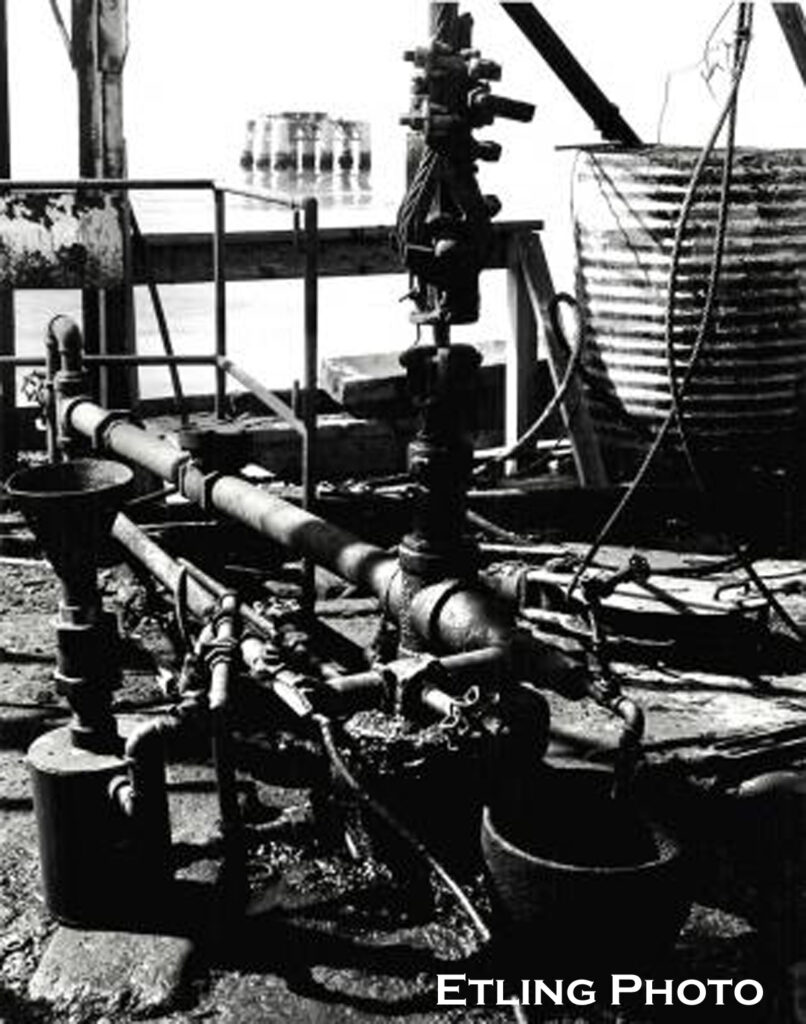 For years, the old piers at Ellwood were forgotten about and the old Bird Island stood alone just offshore. 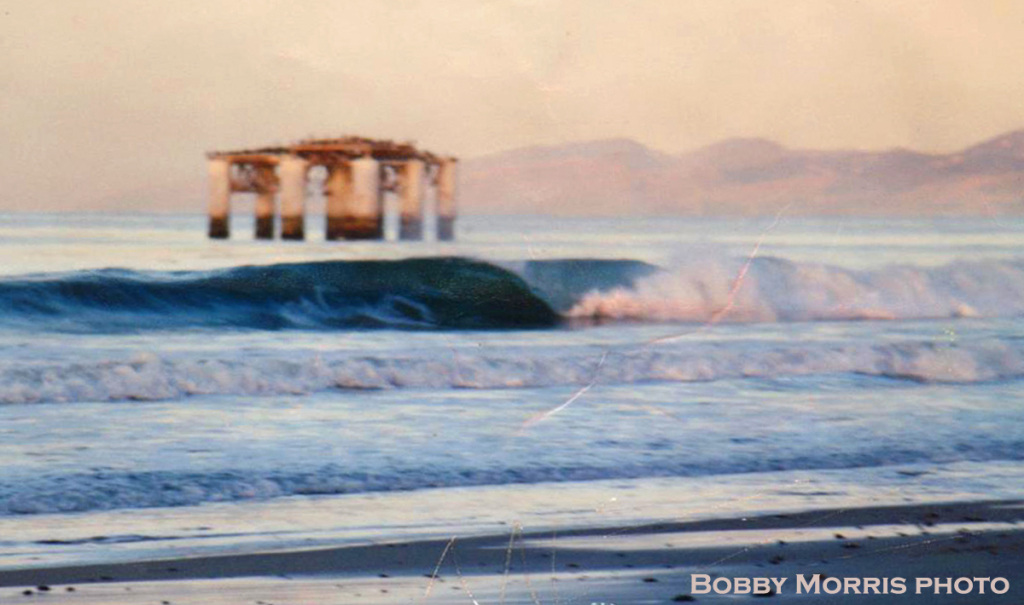 The remaining offshore structure became a part of the scenery as well as a local fishing destination. It was substantially damaged during a storm in 1980 and the experts predicted that the remainder of the structure would soon be knocked down by another storm, or an earthquake, or it would just collapse on its own.

Over the years, the birds had discovered the old pier remnant. Awareness of the pier as a bird roost grew among biologists and bird organizations. A group from the U.S. Geological Survey first photographed Brandt’s Cormorants nesting there. In 1999 a Santa Barbara area birder discovered a Brown Booby here, very rare in California. By this time Brown Pelicans were a constant presence on the structure, and several varieties of gulls could be seen there as well. 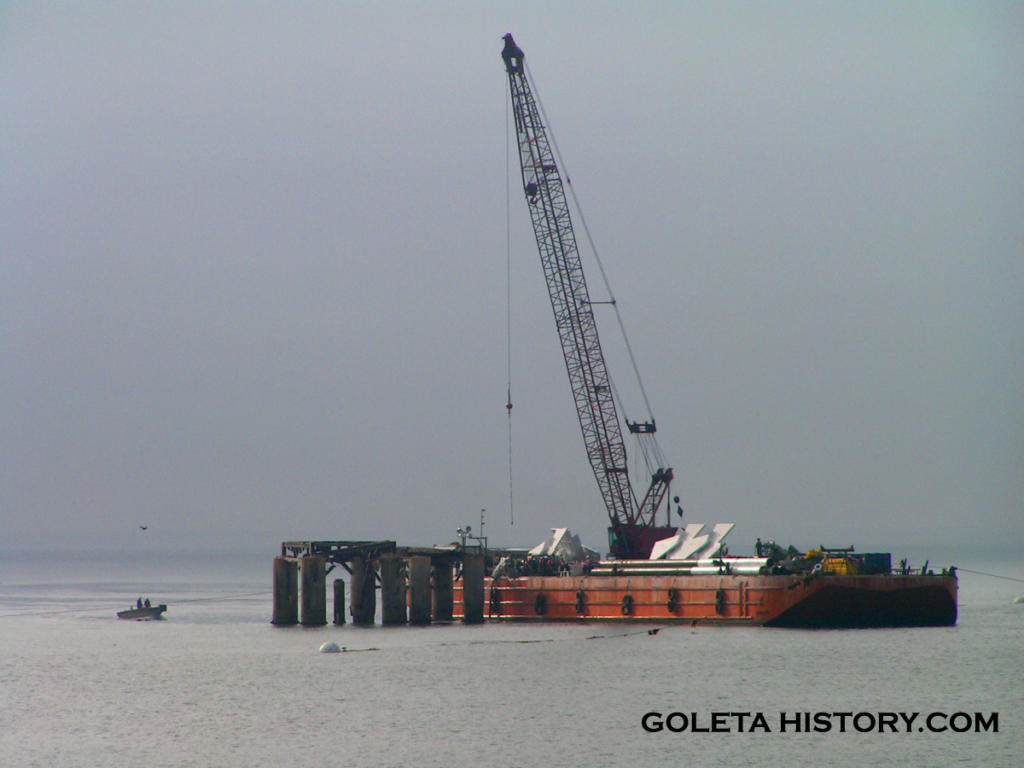 As concerns grew about the hazards presented by the pier and the liability to the owner, the decision was made to take it down. But during an environmental review in 2002, the California Fish and Game Department raised concerns about the loss of habitat for birds. Plans were made to replace the old structure with something that would accommodate their continued nesting and roosting, and a new structure was designed. The Audubon Society was put in charge of monitoring to see if the seabirds would use the new structure. For five years after the structures were erected, Santa Barbara Audubon Society, with funds provided by British Petroleum, would watch for the return of the birds to the new Bird Island. 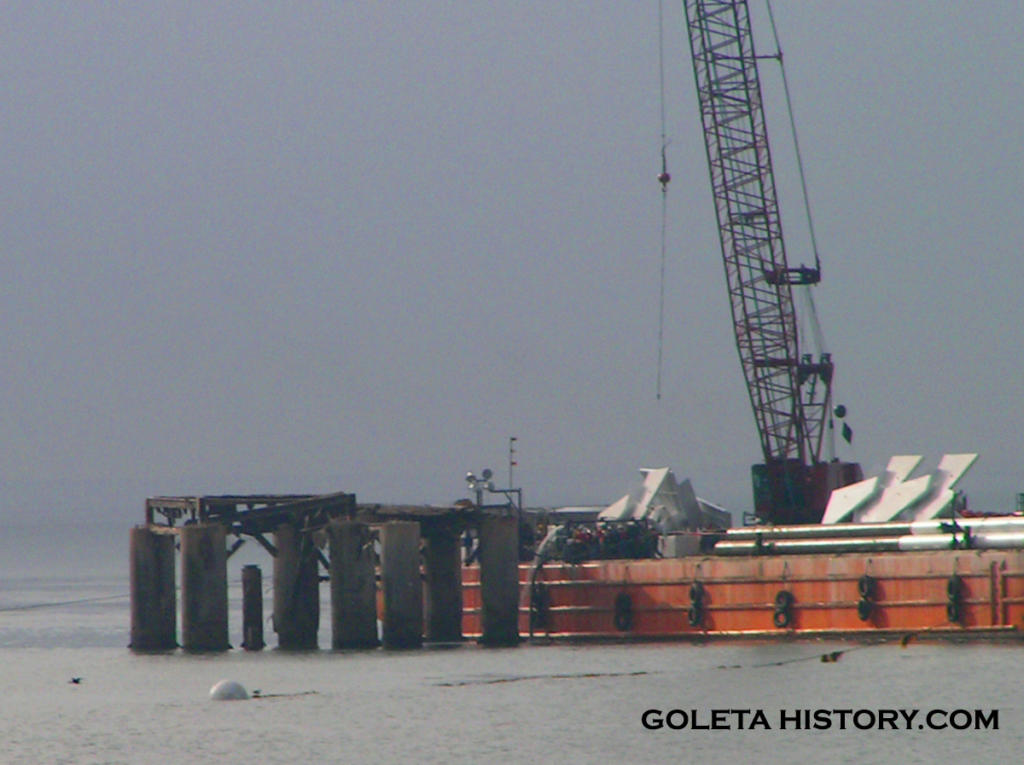 The above photo shows the old structure before it’s removal, and the new structure can be seen on the deck of the barge.

The construction of the new Bird Island was completed in December 2005. 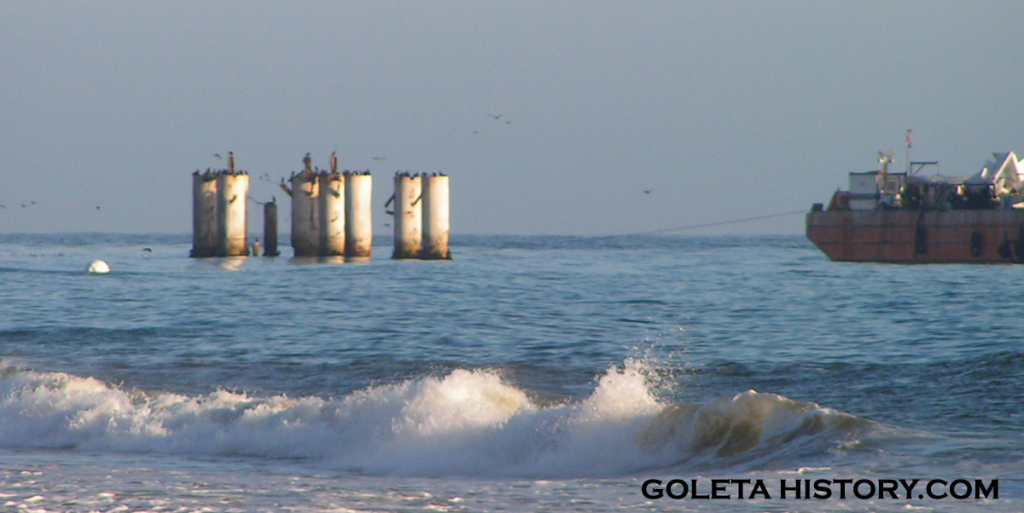 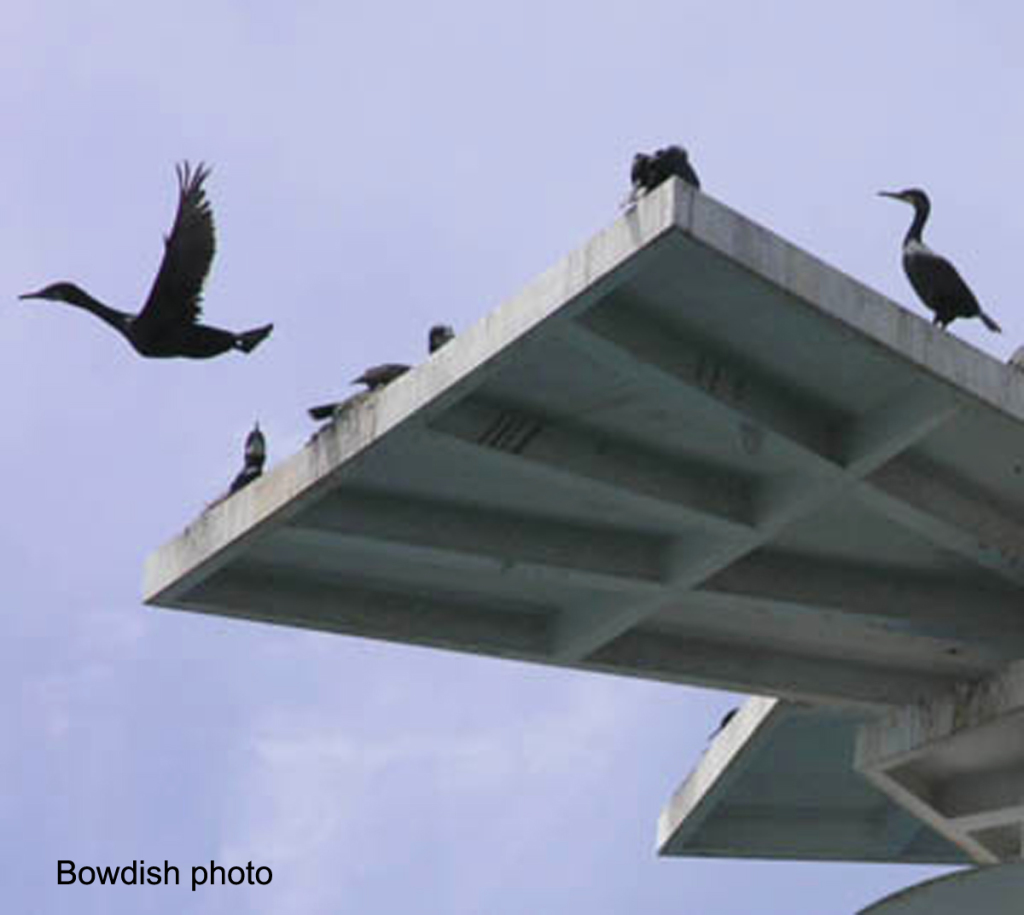 While a few cormorants were attracted to the structures right away, it was never certain whether birds would really take to them the way they had to the old Bird Island. By the end of the first month, as many as 79 cormorants had been counted on the structures at one time. This was well below the 200-plus that were sometimes on the old structure, but it was encouraging nonetheless. 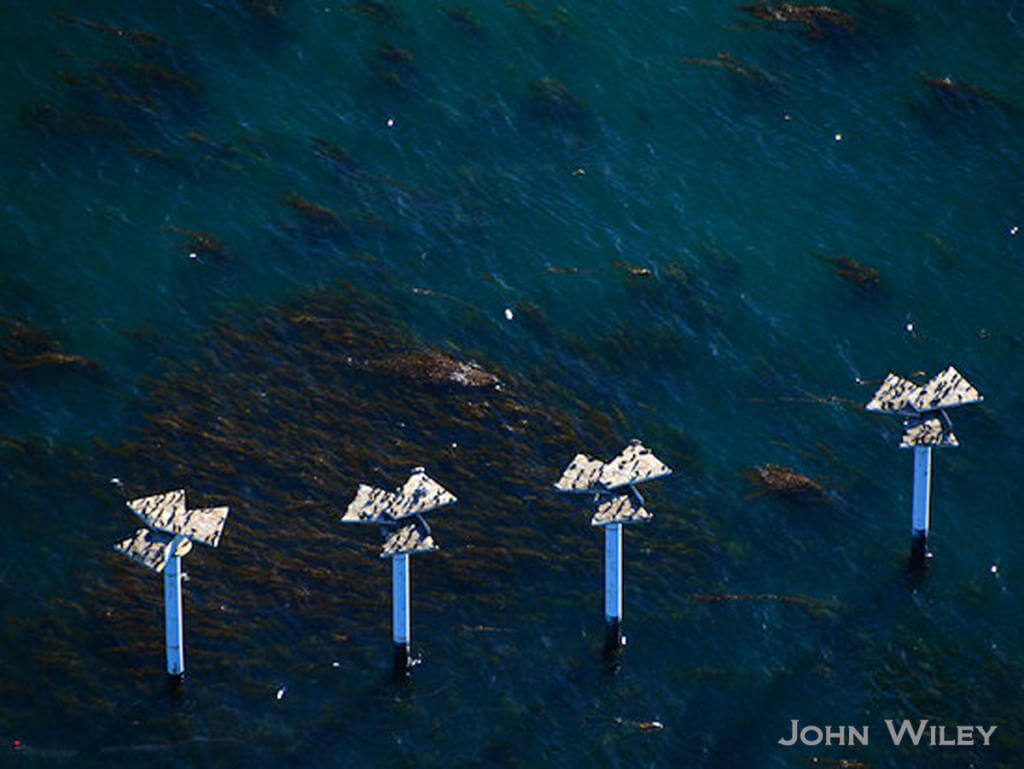 After several years, the new structure has been a hit with the cormorants, bringing in more than ever. The pelicans, gulls and other species have been using it a little less than the old one. 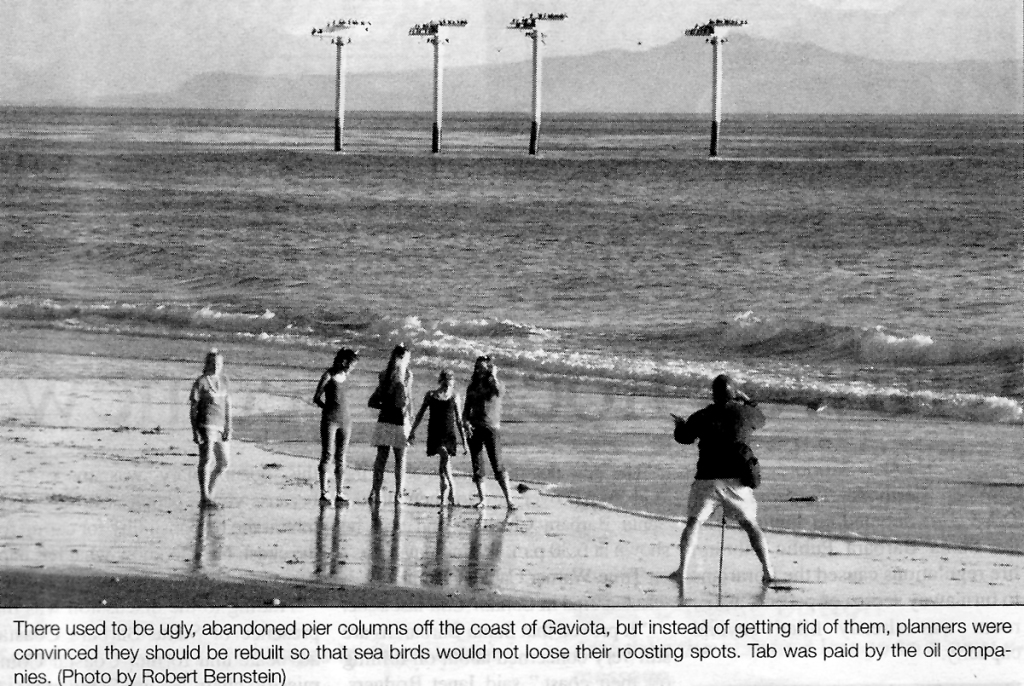 The new structures received a little media attention, but their purpose was soon forgotten by the general public. 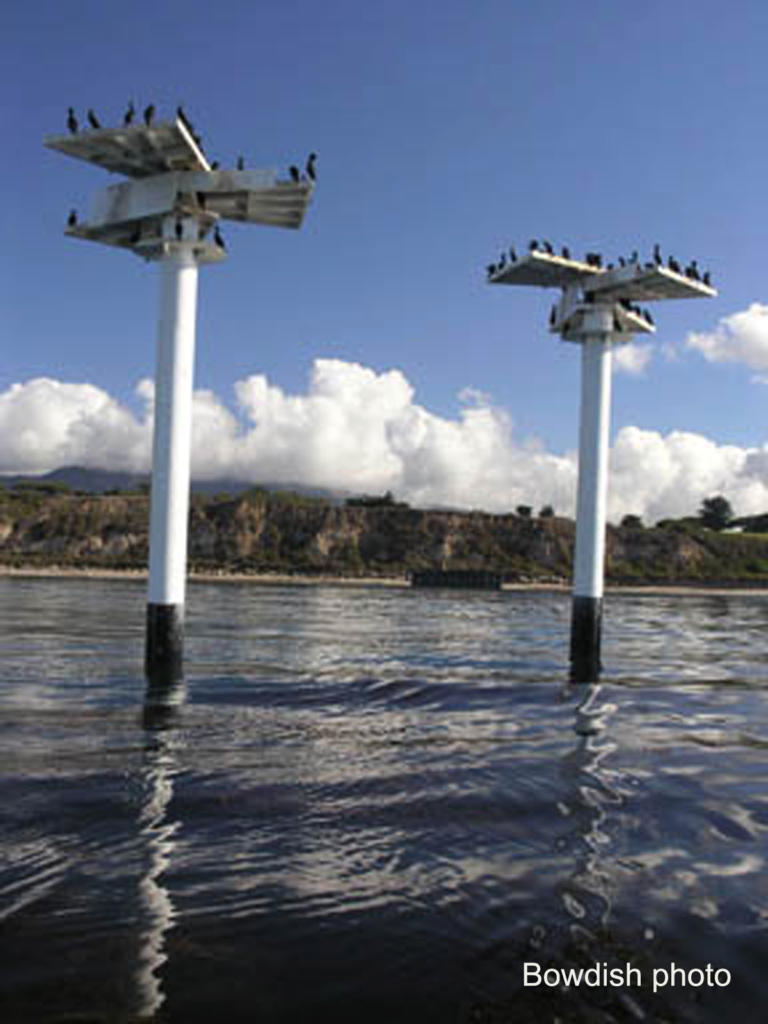 Overall, the bird project could be called a success. 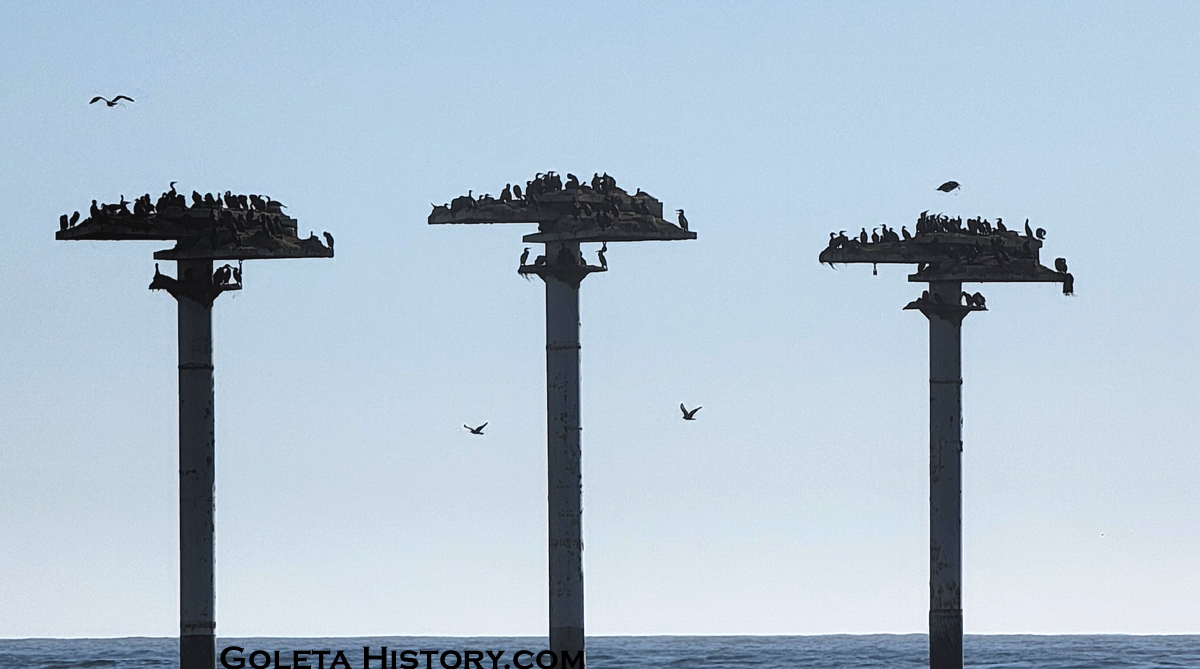 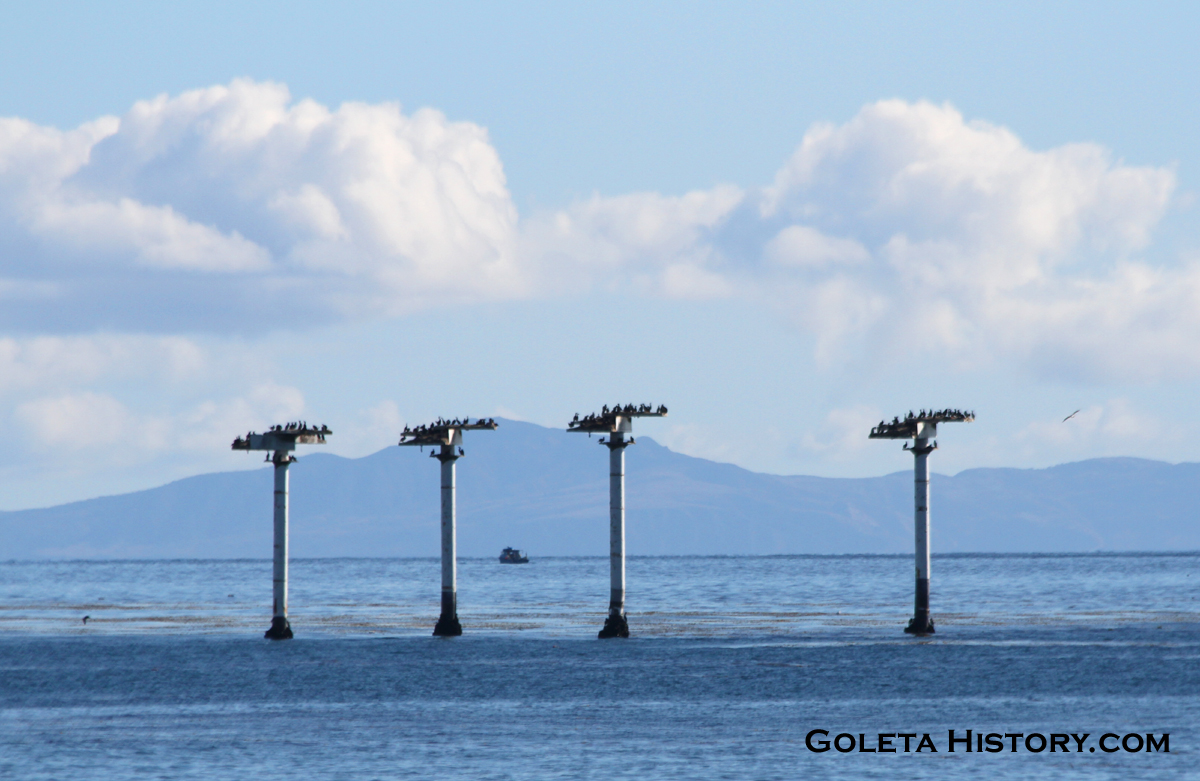 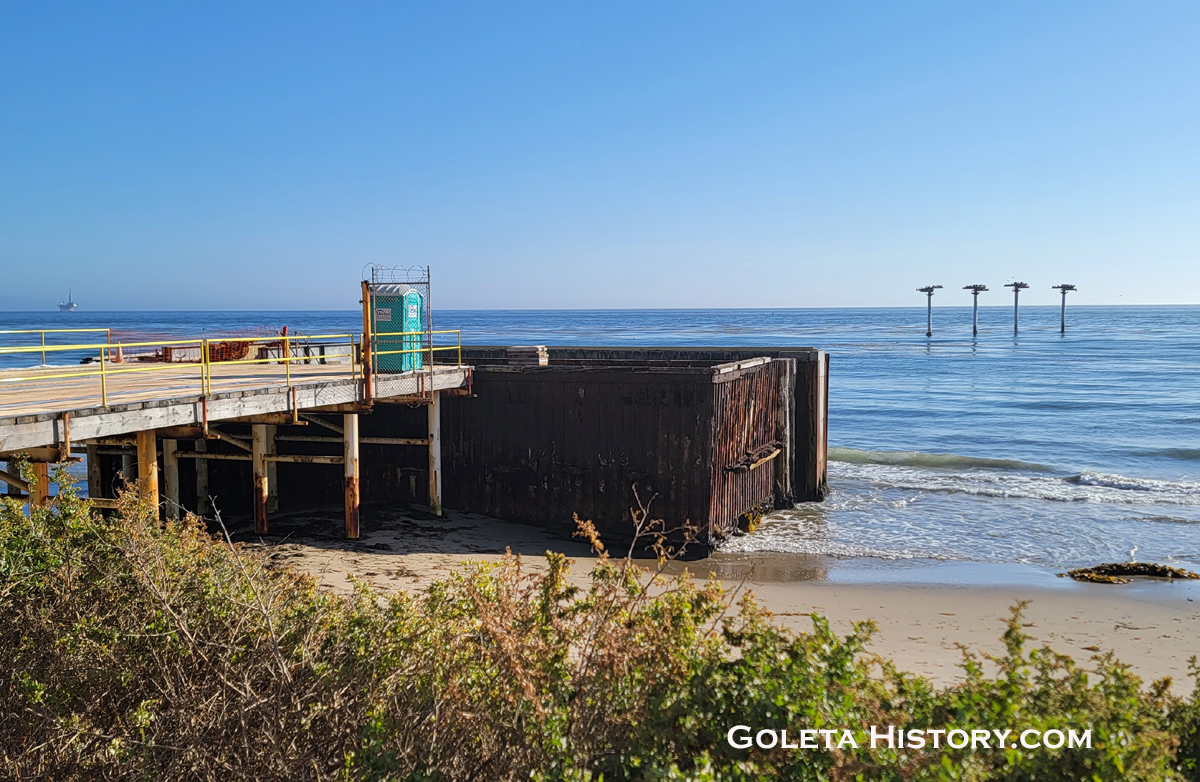 You can see how the new Bird Island is lined up with the beginning of its previous pier, which has since been removed. 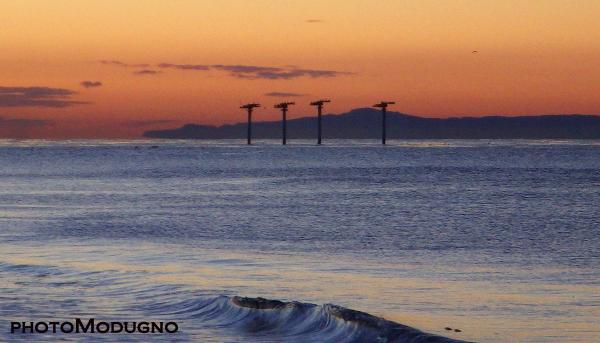 To the old timers, the new structure is a monument of sorts, a tribute to the old hunk of oil pier that sat quietly there for years

Now, only a memory….

But it still can be seen in many artists’ work. 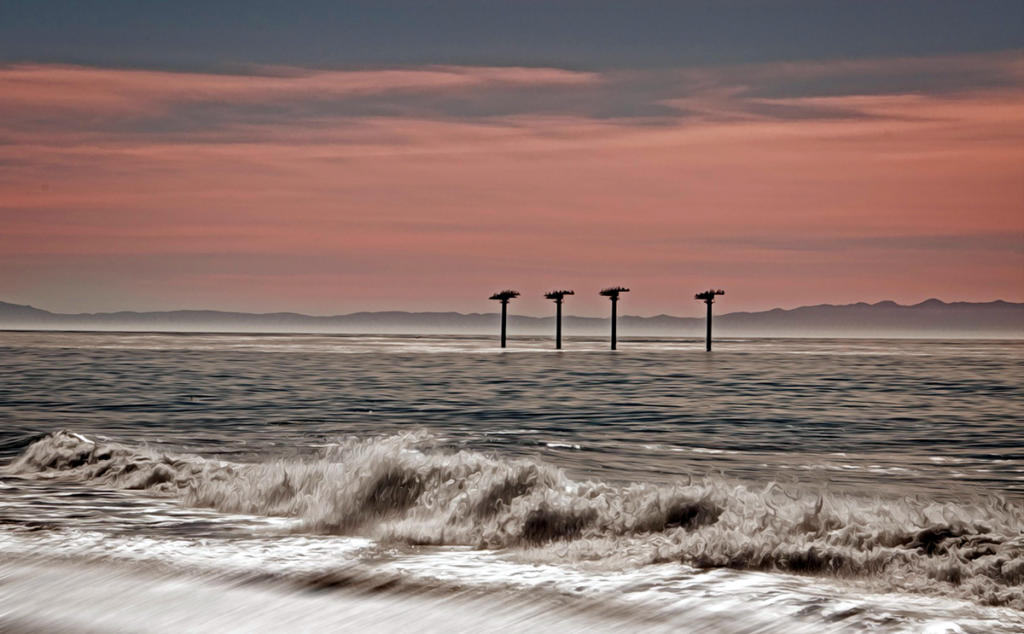 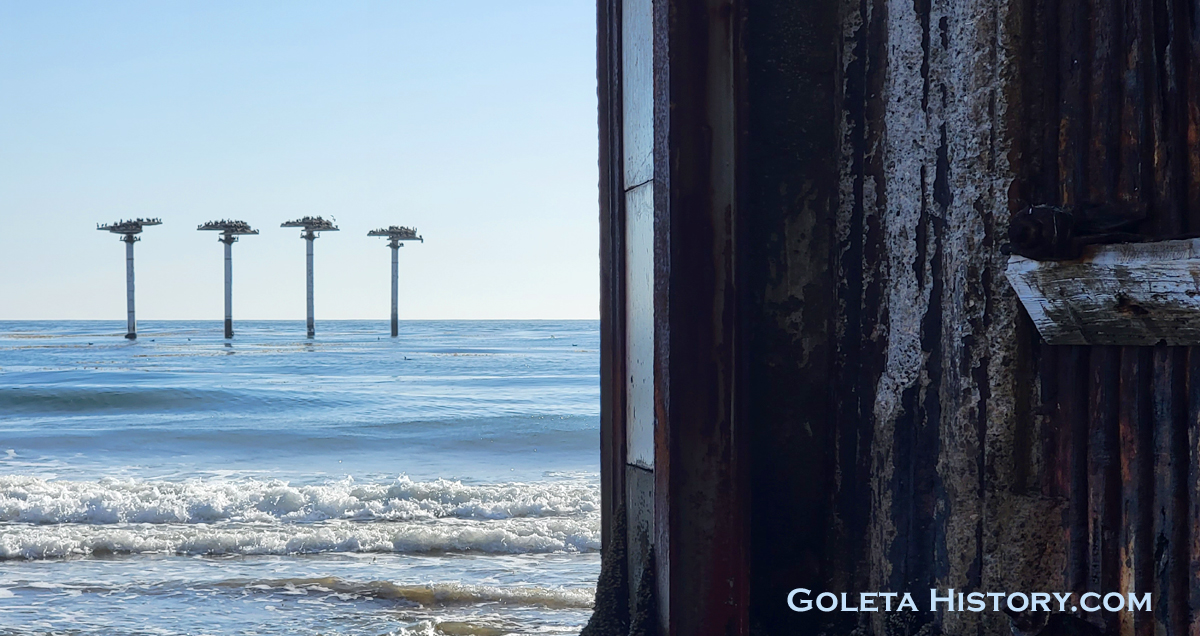 So that is the story behind the Bird Island.